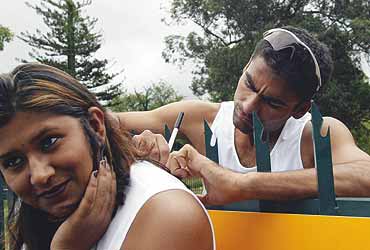 Cross Connection
Not everything that is said about a city is true. So when Indian journalists were told at every stage before they stepped out of their hotels that mugging was unnaturally common on Durban’s beach fronts, there was a clear under-estimation of the danger. After all, the scribes were from tough towns of pickpockets and bottom-pinchers. But a single evening proved that all warnings were based on sound facts. Two journalists lost some of their belongings, one of them at knife-point. Another was sitting on a bench and talking on the cellphone when a boy snatched it and ran away. A Pakistani restaurant near the beach became an improbable news grid for similar tales to meet and dissipate. A friendly waiter told the journalist who lost his phone that if he could come next morning and stand near the restaurant, the thief may sell the same phone back to him for 600 rands. The temptation to buy any other stolen phone at a cheap rate from the street boys was resisted, perhaps because there was fear that it may have belonged to someone else in the press box.

Freeze Frame
There isn’t enough information on how smooth Harbhajan Singh is with pretty girls. But when it comes to being spotted with them, he has undisputed success. At the Golden Horse casino in Pietermaritzburg, he was spotted with two young Indian girls. It seemed to be an innocent meeting over dinner, as is expected in a one-is-to-two ratio. But when a fan decided to take pictures, there was sudden panic at the table. Harbhajan bulged his eyes as the fan walked away happily to reunite with a highly-impressed wife and kids. Bhajji looked at the girls who looked back at him trying to appear shocked and violated. The spinner obviously was worried that the picture will reach the press which often treats such images with excellent captions. The restaurant was in the hotel where the Indian team stayed. After the meal, it has been confirmed, the girls retired safely to their rooms.