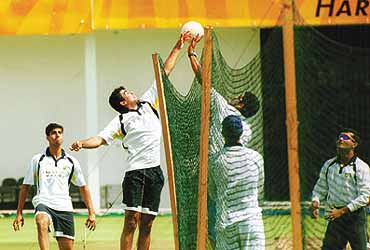 When a cab driver in Harare names his price for a ride, the natural reaction is, "but I didn’t ask how much the car costs". It’s in such an atrocious city which makes Delhi cab drivers look like social workers that Saurav Ganguly understandably gave a brief interview to Outlook on the condition that we organise a car to drop him off at his hotel. If it were not for us, he would have taken the team bus. It was a deal that was immediately accepted despite the full knowledge that a Mercedes in Harare is what they call a rich man’s wife and not a car. Though the cab agency was called and clearly asked to send the best car, it was a tiny 20-year-old run-down Datsun that entered the Harare Sports Club. That made Indian team’s media manager suggest that Outlook give a written apology for offering a ride that was disproportionate with the status of the Indian captain. Saurav squeezed into the car with two others flanking him in the back seat, muttering, "I am fine". Dropping the captain was always going to be embarrassing. 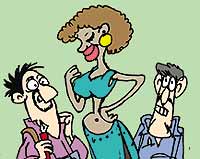 About 100 meters away from Holiday Inn in Pretoria where the Indian team stayed is a striptease bar where they never leave a job half-done. The night before the fateful match against Australia, a few journalists gathered in this bar only to, as those who had a wife and a conscience said, find out if any Indian cricketer had ventured in. While the wait was on, there was about to be a general consensus on paying for a table dance. Just then Elisa sprawled her long frame on the table and said after looking at an icc T-shirt one of the journalists was wearing: "Cricketers never come here. Even the South African cricketers don’t come here. Only the South African rugby team comes here." Elisa is not someone you can ask "why" to. Not when she keeps saying that she will give "all the answers in the private room".

Stumped Vision
If Maria Goretti, who can be seen walking up and down most grounds, is the twinkling eyelashes of cricket coverage, Mihir Bose obviously has to be the other end of the spectrum. The historian, who is covering the Cup from its press boxes, was very annoyed at the Centurion during India’s match against Australia. The commentators’ enclosure was right behind the press box. There was a ban on journalists standing up in the middle of an over so that they don’t block the commentators’ view. Bose rushed to a section of the media centre to complain at the obvious restriction on free expression. Tony Greig was sipping his coffee and watching a replay when Bose came along asking angrily, "who is in charge here". Greig had missed Yuvraj Singh’s dismissal because someone in the press box had stood up then. He thought he will catch the replay in the media centre, "when this bloke came and stood between me and the TV again". 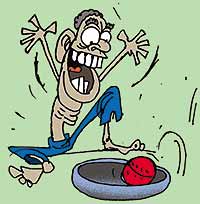 Marie Antoinette’s cake is Ali Bacher’s cricket. Holding World Cup matches in Zimbabwe is a queer luxury for its people who wait for 3 to 8 hours on an average everyday for bread. Vehicles wait for nearly a day outside petrol stations to get fuel. Sugar sells at thrice its official price in the black market. There is hardly any milk being sold anywhere. The local currency comes close to confirming a spiritual point of view that money is nothing. In Harare, they call the Zimbabwe dollar Ferrari because, "it’s red and it vanishes". There’s starvation and general paranoia that Mugabe is listening to everything that’s being said.It’s in the middle of all this that Zimbabwe hosts some Cup matches. The tickets were sold at a flat rate of 1,000 Zimbabwe dollars which a day before India’s match against the hosts rose to about 30,000 in the black market. The only beneficiary of the Cup is the Zimbabwe Cricket Union which will make about eight million US dollars. People are being told that the Cup is bringing foreign currency, so it has to be a good thing. As the zcu is making plans to "take cricket to poor black boys", people are resorting to any means to conduct life, even stealing common metals. For example, an address in Harare reads—Avril’s Guest House, Road Signs Stolen, Avril will pick you up from the Airport.