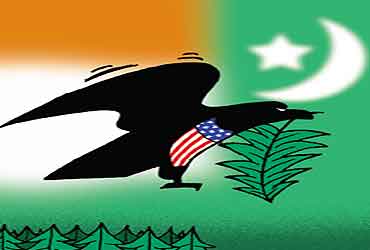 outlookindia.com
-0001-11-30T00:00:00+0553
Barely a fortnight ago, foreign minister Yashwant Sinha took serious objection to the US' homily to India to enter into a dialogue with Pakistan over the future of Kashmir. His annoyance was justified, not because there is something repugnant about the suggestion to talk to Pakistan, but because Richard Boucher, the White House spokesman, made it in response to the murder of Kashmiri Pandits in Nadimarg in a terrorist attack that had all the hallmarks of having been launched from across the Pakistan border. If he was not urging India to try for peace through appeasement, then one does not know what he was saying.

Hard on the heels of Boucher's statement has come an interview by Colin Powell in The New York Times, in which he has promised that the US will 'pay more attention' to the Kashmir dispute after the Iraq war. Since this came a few days after a telephone conversation between Vajpayee and Bush in which the latter, while urging dialogue, also mentioned the Line of Control (as a possible solution), some Indians may conclude that a more active role by America is likely to mean greater pressure on Pakistan to accept the 55-year-old status quo in Kashmir as the basis for a permanent solution. Such a conclusion could, however, prove unduly optimistic.

There can be no doubt that the US has taken a dim view of the repeated and frequent acts of terrorism in Kashmir and the rest of India. It has also made it clear, both in private and public, its belief that much, if not all of it, has been inspired by Pakistan and has been perpetrated by terrorists from across the border. There have also been several indications, in the recent past, that the US state department considers a solution based upon the LoC as the only feasible end to the Kashmir dispute. Despite all this, there is no certainty that the US will either put pressure on Pakistan to desist from acts of terrorism in Kashmir, or back India's implicit stand that it will only consider a solution that makes the LoC, with or without modifications, the recognised international border between the two countries. On the contrary, there is a growing likelihood that the US will once more abandon both international law and its own past positions to suit short-term expediency, and abruptly reverse its stand. The reason is that the US took all of these positions before it embarked upon the Iraq war. That war could easily force it to change its position on Kashmir, just as it is forcing it to change it on Palestine.

Change is being forced upon the US because the war has not gone the way it had expected it to. First, the Iraqi people have not revolted against Saddam. This has not happened even in the Shia areas that had revolted against him in the wake of the 1991 war. As a result, at the time of writing, even Basra, where the coalition had expected to be greeted with flowers, has not fallen.

Second, barring stray contingents, the Iraqi army has not surrendered. On the contrary, it has not only adopted unconventional means of conducting warfare, but even engaged in pitched battles despite its total lack of air cover. That has taken not only courage but commitment.

Third, the fighting in the towns has raised the death toll among civilians. This has not only alienated Iraqis further, greatly complicating the task of ruling Iraq after the war ends, but what is far more alarming for the US and UK, given birth to a raging torrent of hatred across the entire Muslim world such as has never been seen before.

Today the coalition is caught between a rock and a hard place. It can minimise civilian casualties by prolonging the war. But the longer it drags on, the more time the mullahs will have to whip up hatred against its members. Or it can try for a quick victory.But that will require it to bomb and rocket its way into the cities and kill many, many more civilians, especially in Baghdad with its five million inhabitants. This will have exactly the same effect on youth in the Islamic countries.

The US and UK have already decided that if they cannot somehow kill Saddam by means of an aerial attack, and are forced to fight to the end, they will take the latter course. They are therefore in desperate search of some other means of propitiating Muslims in other countries and defusing the anger that is building up against them.

Tony Blair seems far more aware of this need than Bush Jr. That was the reason why he rushed to Washington to urge the US to let the UN take over the governance of Iraq after the war. That is also why he has insisted all along that the declaration of war on Iraq must be accompanied with the announcement of a road map for the creation of an independent Palestine. As the war continues to worsen politically for the allies, would it be too much to expect him to add the propitiation of Pakistan on Kashmir to the list?

There is also every reason to expect Washington to be far more receptive to such a suggestion than it has been to the other two. Leaving Iraq to the UN would shatter the neo-conservative vision of a new, democratic, pro-west Middle East that Iraq is to usher in. As for the road map for Palestine, it has already been riddled with crossfire from Tel Aviv. Bush knows therefore that it stands virtually no chance of being adopted. That leaves only Kashmir to offer as an olive branch to the world's Islamist fanatics. Who cares in Washington that the vast majority of the Kashmiris are anything but fanatical Muslims, and that most of them don't want to leave India? It has a fire of its own making to douse.