Bhandarkar's is but a surface treatment 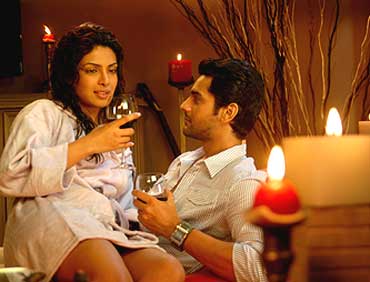 Okay, it's a hard and painful life out there for a model, behind those designer labels, warpaint make-up and intrusive flashbulbs. Fashion aims to present the murky, fake and shallow side of the beauty business, but tells you nothing that you didn't know already. In an effort to appear real, Bhandarkar throws in some real-life faces from the industry—Lubna Adams, Noyonika Chatterjee and Jesse Randhawa, to name a few. Then he recreates some infamous disasters, like (surprise!) Carol Gracias' wardrobe malfunction, and an oblique reference to the tragic riches-to-rags story of former model Gitanjali Nagpal (played by Kangana Ranaut). In the name of detailing, you get the partying and the hedonism, the networking and the air-kissing, the drinks and the drugs, the betrayals and the disillusionments. Every cliche about the industry—gay designers, design filching, the insecurity, the bitchiness—features. But none of it makes an impression—all that stays with you are some nicely-shot ramp sequences set to the tunes of Salim Suleiman.

The narrative is overlong and seemingly endless, till things suddenly heat up at the very end. Will our model be able to walk the ramp again—a situation akin to whether a batsman would hit the sixer off the last ball to win a match. The film is packed with innumerable characters, but most remain sketchy, except for the heroine, Priyanka Chopra. And she too doesn't really come out shining. The small-town girl has a rather easy way up the modelling ladder, with support from a group of friends. But Bhandarkar equates success with moral depravity, so as she grows in stature she also gets suitably compromised and debauched. Why does every successful woman have to be a bitch? Are there no normal, happy, innocent souls in the world of fashion?