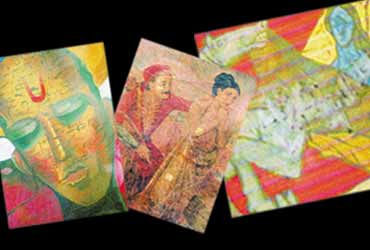 outlookindia.com
-0001-11-30T00:00:00+0553
The American had no idea who the silver-haired man sitting next to him on a plane out of India was. Thrilled about a work of contemporary Indian art he'd bought, he showed it to him, saying it was by "some artist called Husain". A smug smile must have carved itself on his neighbour's face: M.F. Husain had no trouble recognising his work. But that smile faded at second glance: it was a fake. Just as there's more 'Scotch' in India then Scotland ever produced, there are more 'Husains' floating around than the octogenarian artist could paint in three lifetimes—despite the speed with which he churns them out.

Imitation, they say, is the best form of flattery. And Husain must be the most flattered artist in India: he's the most faked living artist. He's not the only one, though. There has been a dramatic increase over the past two years in the number of fakes inundating the secondary art market. Gaitondes, Ram Kumars, Tyeb Mehtas, Razas, Ganesh Pynes, Anjolie Ela Menons, Souzas, Akbar Padamsees, J.S. Swaminathans appear to be tumbling out of studios, even garages it would seem. Ladies in long cars cruise galleries with a 'Tyeb Mehta' or a 'Gaitonde' under their arms. Men with paintings do the rounds of galleries, dealers and buyers—just as carpet dealers. Some gallerists and dealers have art students or unsuccessful artists on their rolls turning out copies of the works of the 'hot' artists of the day. Sons and daughters and friends of the Most Wanted Dead Artists ensure their 'works' don't dry up. Fakes are increasingly being spotted in the catalogues of auction houses.

"The surge in the number of fakes has to do with the growth in the market and the high prices the works of some contemporary artists fetch," says Arun Vadehra of Delhi's Vadehra Art Gallery. Fakes have become good business. After Tyeb Mehta's triptych Celebration went for an unprecedented Rs 1.2 crore at the Christie's auction in New York recently, ersatz Tyeb Mehtas suddenly began to surface in Delhi and Mumbai. Says Mallika Sagar of Christie's: "There is a correlation. You see prices go up in public sales and the influx of fakes. When Jamini Roy's auction prices went up, so did the number of fakes. It was the same with Chugtai."

There has, however, been a shift from the Bengal School to post-Independence artists in the shadowy world of the fakers. The paintings of Jamini Roy and the Tagores (Abanindranath, Rabindranath and Gaganendranath) used to be the staple fare of the fake peddlers, as were Hemen Mazumdar's works. Similarly, Raja Ravi Varma's paintings were also coveted through much of the '90s. But once it became known that copies and fakes of these works were flooding the resale market, buyers became increasingly reluctant to buy period works. Playing safe, auction houses began to turn their attention to contemporary painters. The fakers have kept up too.

Art restorer and writer Rupika Chawla has been coming across more and more paintings by contemporary artists like Gaitonde and Tyeb Mehta over the past year or two. She usually gets about three or four a month for verification. Recently, somebody turned up with a 'signed' Anjolie Ela Menon. Smelling something fishy, Chawla checked with the artist and returned the painting—she refuses to restore fakes. Menon's works surface in the most unexpected places. Recently, somebody asked her to sign her 'self-portrait'—apparently, Jatin Das had done a sketch of her at an art camp and it had turned up as a self-portrait.

Auctions of contemporary art—both in India and abroad—have not only pushed up prices, fakes have also become a lucrative business. Virendra Kumar of Kumar Art Gallery in New Delhi believes it all started in the early '90s: "There were two auctions and an Amrita Shergil went for Rs 9 lakh.The upsurge came a few years later in 1995 with the nri presence. You had auctions by Christie's and Sotheby's in London, followed by the sale of the Chester Herowitz collection in New York." Auction houses, according to Kumar, became the "first target because of anonymity". They don't have to disclose the names of the sellers. To a more limited extent the names of buyers can also be anonymous.

Buyers and sellers monitor auction sales as stockbrokers do the market. The higher the price the artist commands, the greater the number of fakes. The prices also fluctuate according to the laws of supply and demand. When a well-known artist dies, fakers barely wait for the mourning period to be over before they sneak copies of his/her work into the resale market. It happened when Souza died and again after the death of Gaitonde. And yes, size does matter. Kumar believes that Husain's price rose dramatically a year ago. "It was Rs 500 a square inch two years ago; it has now doubled. It had gone down, though, for a while because of the Herowitz sale when Husains flooded the market."

As the stakes go up, the fakers become bolder and more innovative, and there are more entrants in the art world. While there are a large number of exact copies of paintings, there are also works done in the style of painters being imitated, explains Chawla. "You can have a Souza-ish painting. Interior designers show their clients albums and ask them to choose a work and if they want to change the size and colour." Often, with the artist's signature. Painter Arpana Caur was shocked to see her painting in the backdrop of a TV serial. "I just happened to watch the serial Shanti and I saw my painting of an old woman embroidering. There was a pair of scissors across her body. At that time this work was still with me." She presumes the painter must have copied from the Lalit Kala Akademi reproductions of her work. Caur had another shock in store. Earlier this month she learned a New York dealer was selling copies of the paintings she had done for a show to be held in London and New York this summer. Says she: "These days art curators send photographs of works to buyers well before an exhibition opens and somebody must have made copies from them."

Some fakers even dare to take bits and pieces from different paintings of an artist, across different periods of his/her work and style, and make a single painting with it. Of course, they fake the signature. Last month there was a curious Husain depicting horses and women. One of the horses had been copied from a 1978 painting; women and the other horse had been painted in his style of the '90s. The coup de resistance: the painting had a stamp on it that it had been exhibited at Jehangir Art Gallery in Mumbai. Similarly, a Tyeb Mehta has surfaced with figures taken from different paintings of his. Digital photography has made creating such 'hybrids' easier.

The faking game is acquiring sinister contours. Cynics say that some artists are making their own fakes, while others declare genuine works as fakes.

In the world of art today every pot is calling the kettle black. While gallery owners claim that some artists do this because they don't want to part with the gallery's share of the sale, another reason could be that their earlier works sell for much more in the secondary art market and they don't benefit from each resale. The smaller gallery owners and dealers say that the artists and larger galleries are in it together. Says a gallerist who has decided not to stop working in the resale market: "Galleries are prepared to declare genuine works as fake. They have the big guns on their rolls who will say it's a fake. Buyers then will go back to the gallery to buy that artist."