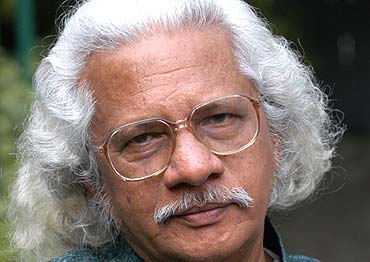 Women have always been a strong presence in my films—whether it is Sita in Swayamvaram, Santhamma in Kodiyettam, Rajamma in Elippathayam, the grandmother in Kathapurushan or the unseen woman prisoner in Mathilukal.

Between Swayamwaram in 1972 and now, would you say your craft has evolved?

Swayamvaram, my first film, was raw. Over the years, my craft has got refined, I believe.

If you had left production logistics to others, perhaps you could have produced more than 10 films and 30-odd documentaries in 35 years?

It’s not a question of division of labour. The real problem is creativity.

Shooting a film amid crowds is like meditating in the swirl of cacophony. How did you learn to concentrate amid noise?

This I learnt early. My primary school was a hall. The division of four classes was more imaginary than real. You had to discipline your ears to pick only what you are expected to learn.

What part of your achievements do you ascribe to your wife?

As one who administers the home affairs and the affairs of her husband.

Why are good films not a hit with the home crowd while they win accolades abroad?

It is widely believed that (our) audience does not want to think.

Have funds ever been a constraint?

Of late, it has not been very difficult to find someone to put in money into my production.

Pick out the very best from your 10 films.

Each of them have been my best.

Isn’t Mukhamukham also a critique of the Left decadence?

It’s not a political film. It’s more an enquiry into a very interesting facet of recent history.