A fine biography on Devsaab's public life, but bashful when it comes to his off screen life: Chowdhury does not tell. 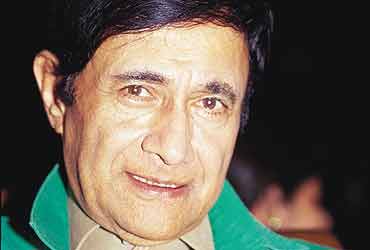 DEV ANAND: Dashing. Debonair
By Alpana Chowdhury
Rupa Pages: 102; Rs 395
Beginning late ’40s, Hindi cinema was fortunate in having three superstars simultaneously. Each of them had marked out his own turf. Dilip Kumar was the tragedian and the most talented. Raj Kapoor specialised in comedy, sometimes shamelessly imitating Charlie Chaplin. Dev Anand made women swoon. He was the most handsome of the three, also suave and urban. I remember a film in which the misguided director put a dhoti on him. He looked ridiculous.

Madras had a flourishing Hindi film industry in those days. Dev Anand flew down there twice to act in some Gemini film or other. It was disastrous. Tear-jerking, social melodramas were not his cup of tea. Give him a jazzy tune composed by S.D. Burman and sung by Kishore Kumar and the man was in his element. Glamorous heroines like Madhubala and Waheeda Rehman brought out the best in him.

Critics dismissed him as an actor. That was unfair. He was terrific in Baazi (directed by Guru Dutt) and Taxi Driver (Chetan Anand). And, of course, he was extraordinary in Guide (Vijay Anand) which is on everyone’s list of 10 best Hindi films ever made. Chowdhury’s written a fine biography on Devsaab’s public life. She is bashful when it comes to him off screen. We know his marriage has been rocky. We know he had affairs with heroines he discovered for his production company, Navketan. None of that is here.

His first love was Suraiya, already a successful star when he arrived on the scene in 1946. They wanted to marry but her family objected. I’ve always been curious to know if the affair was consummated. Chowdhury does not tell. Probably not. Suraiya’s grandmother kept an eye on her like a hawk. I’ve learned one new thing from this book. His real name is Dharamdev Anand.

He still produces and acts in films but everything in the last 30 years has been forgettable. I suspect making films keeps the 81-year-old still ticking. So why deny him the pleasure?