The ED accused the BCCI for FEMA violations. The blame was heaped on the elusive LaMo. 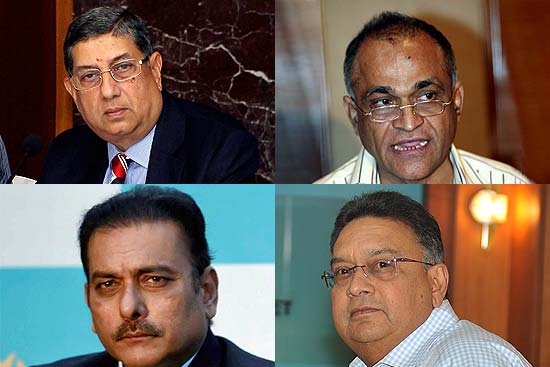 How serious are the complaints against Lalit Modi? One of the 15 showcause notices served on him in 2012 refers to the penalty for wilfully not appearing before the designated officials. Quoting the relevant sections of the Income Tax Act, the notice from the Enforcement Directorate mentions solemnly that the penalty ‘will not be less than five hundred Rupees and may extend to Rupees 10,000 for each default’. That possibly explains why Lalit Modi has not bothered to appear before the ED in the past five years.

Also, judging by this showcause notice, it is the BCCI which is accused of violating the Foreign Exchange Management Act (FEMA), 1999. The Act prohibits Indian citizens and bodies from accepting any deposit from foreigners or companies registered abroad without permission from the RBI. The BCCI is a ‘charitable trust’ registered as a society in Tamil Nadu and is not eligible for remittances from abroad. The ini­­tial notice from the ED, therefore, was sent to the BCCI—to IPL commissioner Lalit Modi, treasurer N. Srinivasan and secretary Niranjan Shah.

The violation refers to two demand drafts, one amounting to Rs 40 crore and another of Rs 20 crore, received from M/s MSM Sattelite, Singapore, for media rights and from one Manoj Badale on behalf of Emerging Media IPL(UK) Ltd, which went on to win the Jaipur franchise, respectively. 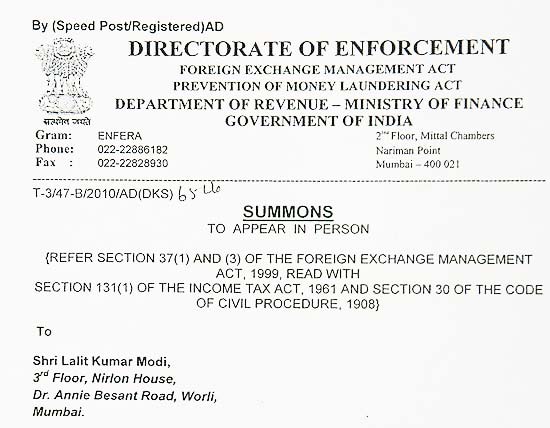 The BCCI is accused of not applying to the RBI for approval. More seriously, the notice claims that in the deposit slip an attempt was made to record that the demand draft was drawn on banks in Mumbai. Two officials of HDFC Bank, senior vice-president Sushmita Padmanabhan and relationship manager Ajith Damodaran, were also accused by the ED of knowingly defying the guidelines issued by the RBI regarding foreign exchange.

BCCI officials and members of the IPL governing council did appear before the Enforcement Directorate and record their statements. But strangely, starting from N. Srinivasan to ex-cricketer Ravi Shastri, a prominent member of the IPL governing council, all of them told the ED that they merely signed on the dotted lines and that it was Lalit Modi who took all decisions. Shastri is even quoted as saying that he did not recall any discussion on the subject in any meeting of the council. The ED, therefore, concluded that it was only Lalit Modi who ran the show and thus only he could reply to the queries.

Lalit failed to appear on four successive dates in August-September, 2010,  alleging that security concerns did not allow him to do so. He’s believed to have left the country around the same time. Prodded by the ED, he claimed that he had received the threat by e-mail from an unknown source on 14/10/09. Not satisfied, the ED asked him for more details and evidence and wanted to know which authority in India had advised him to live outside the country. In response, Lalit furnished several letters he had written to Mumbai Police asking for security. He also claimed that Mumbai Police had intercepted communication in the Mumbai underworld which spoke of plans to assassinate him.

The explanations left the ED unmoved. In his formal complaint dated September 16, 2010, an assistant director at ED, D.K. Sinha, pointed out that the alleged threat had not prevented Lalit Modi from pursuing a hectic schedule between October 2009 and August 2010. He was involved in the conduct of the IPL till April 2010 and travelled extensively within India and outside. Sinha also pointed out that an obliging Mumbai Police provided him with security every time Lalit Modi asked for it. He had also been appearing in crowded places and attended both public and private functions during this period.

“The documents furnished by him do not indicate any compelling reason for travel out­­side India. It is understood that (Lalit)  Modi left India only after the irregularities committed in the conduct of IPL came to surface and inv­­­e­­stigations were intensified,” the complaint added.

While the ED continued to send notices couched in stern language till at least 2012, there is no explanation why other BCCI officials in India were not penalised. And if they have been penalised already for the alleged violation with fines (there is no provision for imprisonment), what stops the former IPL commissioner and chairman of the IPL governing council, Lalit Modi, from returning to India for a week and recording his statement?