Act II, The Fall Of Man 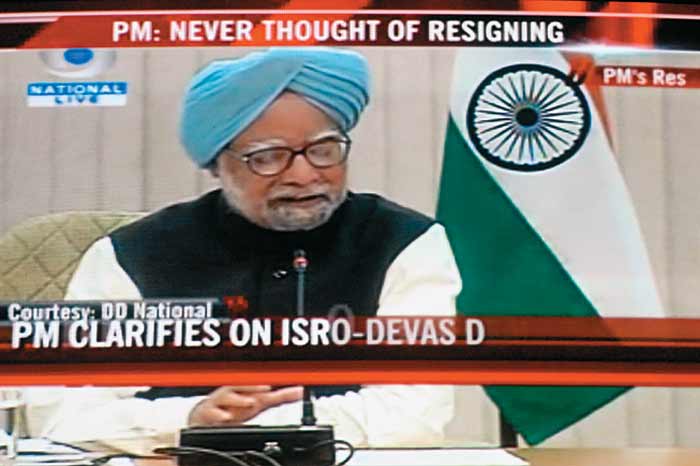 Just in case one was still starry-eyed about the quality of our political leadership, Manmohan Singh’s interaction with TV journalists last week put paid to that hope. At a press conference held at his official residence on 7, Race Course Road, a defensive—and tentative—prime minister told the nation that he was helpless in most matters linked to corruption and had limited authority in coalition politics. For good measure, though, he added: “I am not such a culprit as I am made out to be” and that “the government will bring the wrongdoers to book”.

It was a familiar self-absolving pitch for a politician to make. Just before Manmohan took office and ended up being the longest-serving PM, Atal Behari Vajpayee had successfully positioned himself as the right man in the wrong party. Whenever members of the BJP or larger ideological parivar would create a crisis, Vajpayee would strike a note to suggest he disagreed with what was happening, but alas, what could he do.... It mostly worked for him, given his way with words and political experience.

Manmohan Singh possibly tried the same technique last week when he decided to put himself before the scrutiny of select media, by itself a good thing to do for the head of a crisis-ridden government in a democracy. But listening to him, one could be forgiven for believing it was an exercise in defending himself, not the UPA government, the cabinet he heads, or even the party that has placed him in that post. Coalition politics was blamed for everything that has gone wrong so far; the idea of collective cabinet responsibility was presumably a luxury he could not afford to indulge in because, as the PM said, “you have to put up with a lot if you are running a coalition. Otherwise, you will have to hold elections every six months”.

One can, therefore, presume that it is for the sake of the nation that Manmohan is putting up with so many troubling things to “stay the course” and has “never considered resigning”. He also appealed to the media to be guided by concerns such as national image. In his opening remarks, he said, “An impression has gone round that we are a scam-driven country and nothing good is happening in our country. I do not think that is in the interest of anyone in our country.”

Across the world, when leaders get cornered, they appeal to the patriotic sentiment of the media and perhaps genuinely believe that the fourth estate is doing a disservice to the nation by putting them under scrutiny. It is a very simple psychology to understand. As is Manmohan’s desire to set himself apart from the rot in government that is now coming into public display with the avalanche of corruption charges.

So, did he succeed in salvaging his sinking image? Not really, is the consensus within the Congress party. Naturally, lip service is being paid to the prime minister in media statements, but the real analysis is very different. There is a view that Manmohan admitted to mistakes and said things in his government are not as they should ideally be but then went on to cite his own limited authority. “He actually conceded what the Opposition has been saying all along, that he was helpless. And this is not a smart thing for a leader to do,” says an MP.

Instead, the PM could have announced some bold anti-corruption measures, feel Congressmen. For the record, spokesperson Manish Tewari said, “The PM put himself out there and answered all questions because as an honest man he has nothing to hide.” The only time the PM went on the offensive against the BJP was when he hinted that the party had not supported the goods and services tax because former Gujarat home minister and Narendra Modi’s right-hand man Amit Shah was arrested last year for the Sohrabuddin Sheikh fake encounter case. It was a serious charge, but sources in both parties reveal that the PM was on the mark as before the monsoon session in 2010, the BJP had indeed sent signals that it was not in a cooperative mood because the Modi establishment was under attack.

Meanwhile, after the PM’s press conference, some members of the media also received smses from the PM’s handlers, saying “please support the effort of an honest man”. So was the “honest man” out there defending himself because the party had failed to do so? Is there, in fact, a touch of pathos to the story of this PM, who has gone from the ‘Singh is King’ phase to the current sorry state of affairs? An insider says, “The PM has certainly been affected by what has been happening. It can be seen in his demeanour, his body language. From the time the Congress was re-elected in 2009 to less than two years into his second term, everything has changed.”

From the very beginning, it has been clear that, in the division of labour crafted between the PM and Sonia Gandhi, much of the political power rests outside him. It is also true that the Congress rushes to defend any member of the Gandhi family and that the PM is certainly not the mass leader or the anointed one to whom the party looks for deliverance. That is why perhaps a source close to Manmohan says, “The PM is also aware that most of these public scandals are due to a deficit in governance and not in the party. So, to that extent, it is correct for him to defend himself and he cannot expect the party to carry the burden.” Certainly a sensible rationalisation for things as they stand. 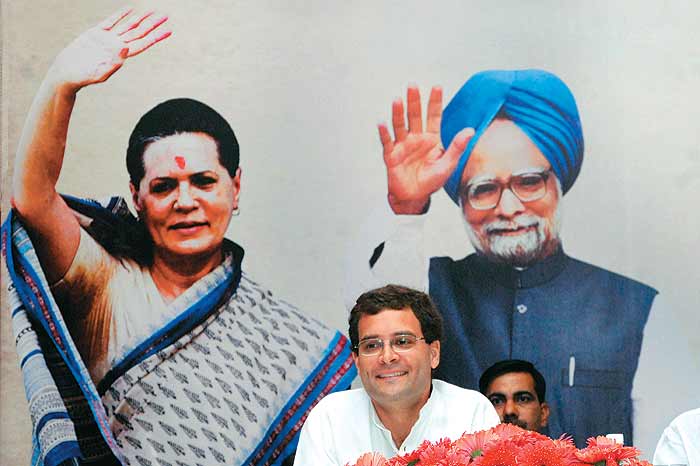 Boy on the burning deck Will Rahul Gandhi step up? (Photograph by Tribhuvan Tiwari)

It is lonely at the top and things have been compounded in Manmohan’s case by the fact that his own party colleagues no longer see him as a winning proposition. Yet, there is no real replacement for Manmohan either. The names of Pranab Mukherjee and A.K. Antony are always bandied around as possible replacements. But as a senior leader points out, one is too much of his own man while the other is too low-key—and yes, a Christian. “At this point, there is no replacement for the PM although many people have some ambitions,” he says.

The more viable political options involve not a change of leadership but the Gandhis taking the bull by the horns. As the party continues its freefall, leaders have been exhorting Rahul Gandhi to take a more proactive role. The younger Gandhi has been urged to give up the project of trying to revive the Youth Congress and take a more visible position in the current dispensation. Now that Manmohan has promised another cabinet reshuffle, the expectation and hope is that Rahul will be inducted. This, party strategists argue, would not overexpose Rahul but at the same time send out a signal that he is the future and thereby stem the freefall.

But whether Rahul himself is willing to do so is a question no one can really answer, although party leaders do live on eternal hope. There are also concerns about whether the young man really has the temperament or the ruthlessness of a politician and whether any exposure at this stage could prove counter-productive.

That is why some party leaders have now begun to argue that it is actually Sonia Gandhi who has evolved tremendously as a leader, connects well with politicians across the spectrum, and if things continue as they are, the job of rescuing the party will fall on her shoulders. In fact, now even Opposition leaders say that there is greater civility and cordiality in their interactions with Sonia than with the PM. But she again has shown no desire for high office.

On the contrary, even within the National Advisory Council (NAC), of which she is the chairperson, she has not really shown the resolve she did in her last innings. Members who were part of NAC-I also say that the PM is becoming more assertive and blocking many of their initiatives. So, what really has changed and is there a real strain between Sonia and Manmohan? Some insiders in the system say that it is a choreographed performance where Sonia shows the commitment to the poor and Manmohan to economic growth. Others say that with the PM having nothing to lose as this is his last term, he is more stubborn about imposing his economic vision.

But NAC members have by no means lost hope. Harsh Mander, for instance, says that although the food security bill has run into trouble and is being whittled down, “it is okay that it is taking some time. It has still only been about eight months for something so huge. Even nrega was whittled down by the time it became a policy.” But the question being asked by the left liberal constituency is whether all these stated good intentions are just a cover for hawking off resources in the name of growth, something at the heart of the present spectacle of monstrous corruption.

Party sources say that for political reasons alone Sonia will have to deliver on some of the stated pro-poor policies, no matter what the cost. Particularly as New Delhi political circles are agog with whispers that corporate India has lost faith in Manmohan. “They have not yet found a candidate or a party to back but certainly the honeymoon with the PM is over, and the US and India’s corporate lobby were his main backers,” says an insider. The Congress, therefore, they say, will have to invest in social security politics, smartly sew up alliances in the states, project a younger leadership, and start looking like a winning proposition again.

The states have, in fact, shown some positive signals. In Andhra Pradesh, for instance, actor Chiranjeevi’s Praja Rajyam Party has merged with the troubled Congress. The talks with ULFA in New Delhi are a step towards intelligently bucking the two-term anti-incumbency in Assam; besides, party managers say, the Assam Congress will get into an understanding with the Muslim All India United Democratic Front party. In Kerala, the Congress is expected to defeat the Left Front, while Mamata Banerjee is expected to take the Congress along in her demolition job of the Left citadel of West Bengal. There are still question marks over the outcome in Tamil Nadu where the Congress-DMK alliance will really be tested given the furore over A. Raja and the 2G scam. Yet, Congress leaders continue to believe that the national political chemistry will change to their advantage.

The more immediate job at hand is to work out a truce with the Opposition. At the time of writing, the signs were positive. The government is expected to concede a JPC that will, according to a senior Opposition leader, submit a report that will be very scathing about Raja but more cautious in its rebuke of the prime minister. But the going will certainly not be smooth for Manmohan, despite many defending him saying he has been trapped in a corporate war. An influential insider also feels the “party is going through a periodic bout of self-flagellation”.

Perhaps that is indeed something the Congress is prone to. After all, it is often said that no one needs to win elections in India. Parties and prime ministers just have to lose them.