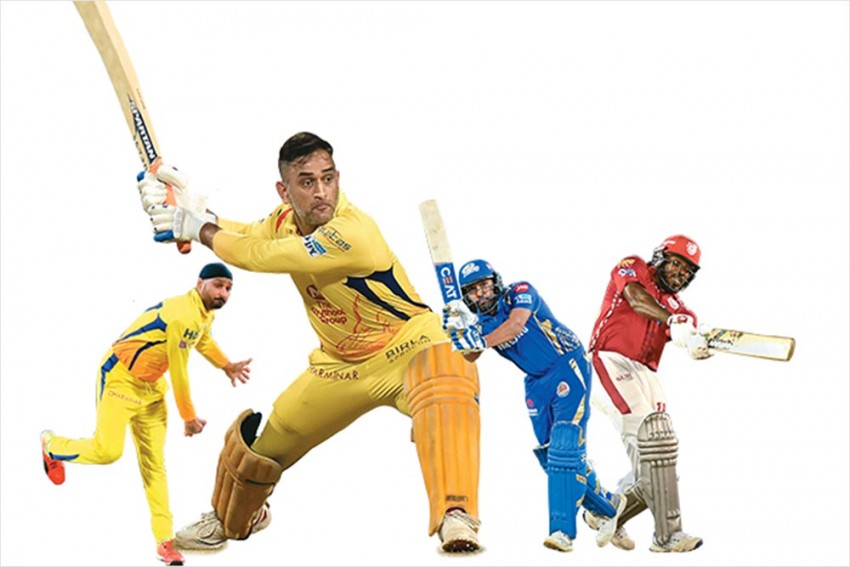 Hitmen
From left: Harbhajan has bowled with guile, while Dhoni, Rohit Sharma and Chris Gayle are some of the batsmen who are over 30, seem to have lost none of their reflexes and have taken hold of IPL 2018
Photograph by PTI, BCCI
Qaiser Mohammad Ali May 10, 2018 00:00 IST Across The Line, Into The Stands

In March 2016, when he was just three mon­ths shy of turning 35 but still India’s ODI and T20 captain, Mahendra Singh Dhoni had answered a retirement-related question by having “some fun” with an Aussie journalist who had popped the question. India had just lost to the West Indies in the semi-finals of the ICC World Twenty20 in Mumbai and speculation was rife that MSD, having retired from Test cricket, might call it quits from shorter versions as well.

A smiling Dhoni called the journalist on to the podium, sat him down beside him. Then, putting an arm around the journalist, he engaged him in a pretty long chat, asking him questions about his own future as an India player. The most strategic question he posed was: “Do you think I can survive till the 2019 World Cup?” In this, there was a clear, double-barrelled message, to the selectors as well as the media, which could have loosely been: “I am the master of my dec­ision. I am focussed on playing the 2019 50-over World Cup and, now, no one should ask me this question again.”

Today, he is less than two months shy of turning 37, but his prowess with the bat hasn’t diminished one bit—proving that his perceived loss of form in the recent past was, after all, just that. As Chennai Super Kings (CSK) captain, he is leading by example in the ongoing IPL, hitting big sixes, playing brisk knocks, and winning/finishing matches with consummate ease. Dhoni and other 30-plus men playing in the IPL completely negate the belief that T20 cricket is all about youngsters, with their youthful, strong, tattooed arms and agile legs. Most of these veterans can still beat any youngster with their fielding as well, like Dhoni has shown with his lightning-quick wicket-keeping.

After the first 10 matches of the CSK, Dhoni is placed fifth in the IPL 2018 top scorers’ list with 360 runs, scored at a fabulous strike rate of 165.9, which out-wha­cks many young eyes and fleeting feet. He looks set to build on his present form and steer CSK into their seventh IPL final and add a third trophy to their cabinet. In all six finals he was CSK captain.

Gayle’s hurricane 104 not out off a mere 64 balls (11x6s, 1x4), during which he smashed and battered SunRisers Hyderabad bowlers into submission—a veteran  effort, one might say—made the stands swoon and won the match for Kings XI Punjab. Even before this current batch, over 30 stalwarts like Jac­q­ues Kallis (KKR), Shane Warne (Raj­asthan Royals), Rahul Dravid (Rajasthan), Adam Gilchrist (KXIP and Deccan Chargers) and Matthew Hayden (CSK) have shone brightly over the years since the IPL was launched in 2008.

Sandeep Patil, a former chairman of the selection committee, stresses that all these people succeeded because they had loads of experience under their belt. “Ultimately, experience is the most imp­ortant thing in cricket. But experience alone is not enough unless you know how to utilise that. Just about six mon­ths ago, people were calling for Dhoni’s head [from the Indian ODI and T20 teams]. India coach Ravi Shastri and I maintained that he still had lot left in him,” Patil, who was known as a big hitter, tells Outlook.

Ace all-rounder Irfan Pathan concurs with Patil. “It was only some people who came up with the theory that over-30 players are over the hill. One’s experience counts a lot and you cannot buy experience in the market. Unless you play you won’t gain experience. So, I am not surprised that these 30-players are performing well. CSK has won the second most number of matches in IPL history and they have done that with the help of some of the most experienced players,” he points out.

Pathan is right. When the CSK, returning to IPL this year after a two-year fixing-related ban, bought Imran Tahir (38), Harbhajan Singh (37), Watson, Dwa­yne Bravo (34), Faf du Plessis (33), Kedar Jadhav (32), Rayudu and Suresh Raina (31) at this year’s auction, people joked that the franchise had chosen a ‘dad’s army’. These critics eventually had no place to hide as Dhoni, whom CSK ret­ained before the auction, and most of the others not only clicked as individuals, but the team has also performed superbly and is atop the points table at the moment. 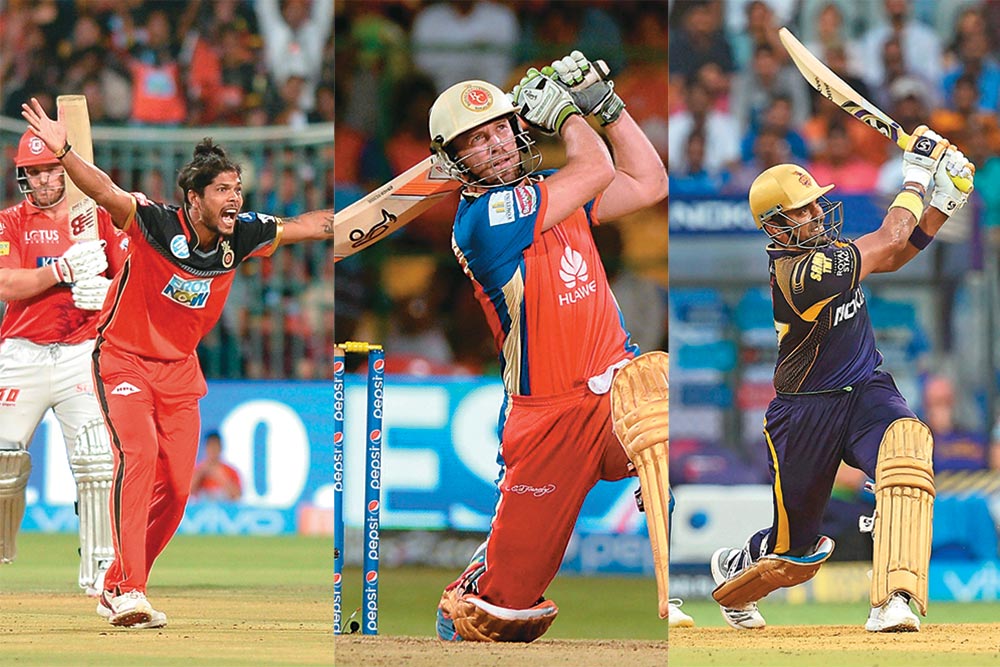 Former India Test batsman Gursharan Singh is also not surprised at the 30-plus brigade exceeding expectations in cric­ket’s shortest format. “One unique aspect of the IPL has been that over the years many over-30 Australians have played in it. This is so because in their own country many players, like Lehmann, have made their international debut when close to 30. Lehmann was 28 when he made his Test debut. And they all have gone on to distinguish themselves while representing Australia,” he says. Of course, T20 cricket is not all bang-bang. This format too needs strategising to come up trumps. Dhoni hitting a flurry of sixes, outfoxing, out-thinking and anticipating every wile and variation of Yuzvendra Chahal in CSK’s ret­urn match against RCB is a classic example of brain getting the better of brawn in this format as well.

Of the five best finishers while chasing in this season so far, four—Dhoni, Bravo, Karthik and Yusuf—are on the supposedly wrong side of the 30. This again shows that a youthful approach of blind hitting is not always the best strategy in T20 cricket.

Patil seems to repose immense trust in Dhoni’s intelligence and dec­­ision making. “People should take a lesson from Dhoni, and not just from his batting. Nobody is talking about his [brilliant] wicket-keeping, which is not easy—sitting up and down every delivery. Along with his experience, the fitness level that he has maintained, the hunger that he has shown and the way he has guided youngsters in different teams is remarkable,” he emphasises.

Let us return to what Dhoni cleverly told the world through his interaction with the Aussie journalist on March 31, 2016. He had indicated that he was keen to play the 2019 World Cup, and his performance in 2018 IPL has consolidated his claim and belief that he was focused on the next year’s tournament in England. “I can see him playing the World Cup 101 per cent. I want him to play. I am just keeping my fingers crossed that he keeps his fitness right,” hopes Patil. He says Dhoni is intelligent enough to leave the scene when he feels he is done with international cricket.

One of the ways players gain experience is by playing on varying surfaces, points out Pathan. “Other than cricket, the fields for all other sports, be it football or basketball, rem­ain the same. But, in cricket, every pitch behaves differently at every venue. And this adds to the experience of cricketers. Not only good performances, but poor shows also provide you experience. In T20 cricket, you have to take quick decisions and here too experience comes in handy,” says the Baroda-based all-rounder.

Gursharan, too, lays emphasis on the importance of physical and mental att­ributes. “Sachin Tendulkar played int­ernational cricket till he was almost 40. It all depends on one’s fitness and mental aspect as well. In this regard, Dhoni, for example, reads the match situation and then hits the bowlers. Little surprise, then, that the 30-plus players are performing well in the IPL, and earning good money as well. Also, T20 cricket extends players’ careers because in this format you need fitness for just about four hours [per match], unlike in five-day Test match cricket,” says the former Punjab Ranji Trophy-winning captain.

With three-fourths of the IPL over, the tournament is inching towards its business end. And it is here the various teams that qualify for the knockout round will need an encore from their 30-plus brigade to take their ships ashore. If they can continue the good work, these young men in their fourth decade will create cracks in an old perception—that 30 is over-the-hill territory. Thus, the theory that T20 is for the young would stand disproved.

The Oracle Of Transitions