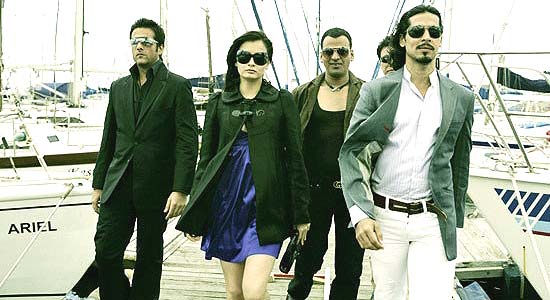 The English adage, “making a mountain out of a molehill”, best sums up Acid Factory. It’s a straight old boring story about a kidnapping gone awry that is puffed up and pitched as something very different and unusual, all by introducing the element of collective amnesia and taking the narrative back and forth in time to unravel stuff that is not so baffling or inexplicable after all. Result: a film pretending to be novel when it has nothing even remotely remarkable about it save a clean-shaven and slim-faced Gulshan Grover playing the cop for a change.

A bunch of crooks find themselves in an acid factory. They can’t remember what
happened, how and why they got there; they can’t even recollect their own names. One
of them happens to be an undercover cop (Fardeen) planted by police chief (Grover) to grab the mastermind villain Qaiser Ibrahim (Irrfan). And all the action unfolds in Cape Town in South Africa when it could well have played out in small-town Kanpur.

The plot is so hare-brained, inane and absurd that it’s not even worth dissecting. There are no thrills, chills or excitement. This is despite hundreds of smart cars smashing on the screen and millions of guns blazing gloriously. The film has the word macho written all over it, be it the guns, babes, stunts, chases or the rugged landscape. Even the pretty and petite Dia Mirza shouts gruffly and throws her non-existent weight around to seem manly. Very little is required by way of acting from anyone so they do precious little other than stare blankly into the camera. They swagger, frown, throw attitude, wear glares and walk together in slow motion towards the camera (an image appropriated and copyrighted by producers White Feather Films since Kaante) as if that’s the definition of cool. However, it is a real pity to see a seasoned player like Manoj playing the fool and hamming atrociously; and even more unfathomable why Irrfan needs to sport such mindless movies on his otherwise dazzling CV. Acid Factory is an enervating and tedious film that’s forgotten even as the end credits begin to roll.