The dotcom bus t has made the venture capitalists wiser. Now, they only fund ventures which they can control. 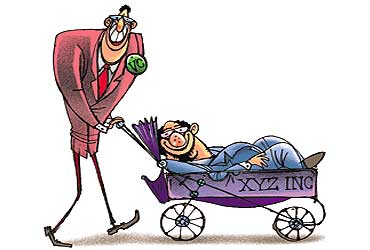 outlookindia.com
-0001-11-30T00:00:00+0553
The popular Dire Straits track 'Money for nothing...', which had us grooving in the '80s, was revived in the '90s as an anthem for those aiming to break into the league of dotcom millionaires almost overnight. The financiers for such startups were the venture capitalists (VCs)—men with deep pockets and an amazing desire to spend. Sadly, when the bust came in 2000, it was the many billions of dollars spent on internet projects that had to be written off almost as soon as they had begun.

Today, many of those entrepreneurs have vanished into the blue. The VCs still exist, although they have become twice-bitten and thrice-as-much-shy. Risk-averse, but still hungry for profits, they have done a virtual volte-face. They now prefer to call themselves "private equity players". A lot of their money is pumped into listed firms. Even when they look at privately held companies, they choose profitable ones that have been in existence for years.

A few VCs have turned into corporate predators—engineering hostile takeovers, masterminding management buyouts (MBOs) and taking over startups they have funded. In a sense, the VCs are completely negating their own raison d'etre. That is, they are no longer the old sort of people who provided seed capital, hand-held managements and exited via IPOs. Also, as expected, they have shifted their focus from internet and technology to sectors like BPO, entertainment, retail and biotechnology.

The reason is simple. Despite their brave faces, figures reveal that the going for VCs has been dismal for the past couple of years. Thanks to the dotcom bust and software slowdown, investments have fallen from $1.16 billion in 2000 to just over $800 million in 2002, a steep fall of nearly 30 per cent. Several of them have either walked out of India or are not doing much work. Prominent among them are GE Private Equity, CDPQ (Canada) and AMP (Australia). Today, the strike rates are down and for many of them, it's about how to cut their losses, rather than earn profits.

Explains Ashish Dhawan, senior MD, ChrysCapital: "There was a time when VCs were busy writing cheques, but now the recklessness has given way to some sanity." In fact, at one time, over 40 per cent of ChrysCapital's investments were in the internet space and almost all of it had to be written off. What saved it was the $90 million Spectramind deal in which it sold its stake to Wipro. Says Dhawan: "Total losses from dotcoms were around $25 million and Spectramind gave us (a profit of) $50 million." Now, the fund is focusing on mid-stage to late-stage companies.

ChrysCapital and others are also buying into listed scrips that include banks and manufacturing firms. For example, the portfolio of CDC Capital Partners, a UK-based VC-turned-private equity firm, now includes UTI Bank and Glenmark Pharma. Earlier, CDC had profitably sold its stake in HDFC and Apollo Tyres. In addition, the fund is now eyeing private deals including MBOs where the fund backs a management to wrest control from willing promoters who could be an individual, a group or an MNC.

Agrees CDC's country head Donald Peck: "The Indian market is ready for larger private equity deals, some of which are not visible to the public at all." Peck talks of MBOs as the next big thing and CDC itself had engineered an MBO at Preferred Brand Foods, a company that markets the Tasty Bites brand. Later, the fund exited from the company and earned a healthy return of 35 per cent in the bargain. 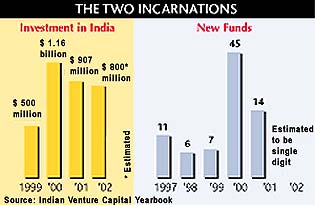 Apart from MBOs, CDC is exploring options to directly take over companies, especially psus, that are up for sale. It had aggressively bid for cmc. As Peck confirms, CDC was one of the two bidders, the other being the Tata group that finally got control of cmc. Sources who are involved in the deal say that CDC may be bidding for the state government's stake in Punjab Tractors.In both cases, CDC's aim was the same: to own the shares, take part in the decision-making process and decide whether it wishes to change the existing management.

But the change of tack in some instances has been a trifle too aggressive. Some cases have revealed that the VCs are turning into predators and attempting hostile takeovers. About a year ago, the stockmarket was talking of a VC who was picking up huge stakes in an IT education firm. However, when the news leaked, the VC stopped short of the 15 per cent mark, after which it would have been forced to make an open offer. This kind of hostility is visible even when the VCs deal with crises in startups they have funded earlier. Like their US counterparts, they are becoming majority owners, bringing in professional managers and asking the original promoters to quietly get out. The most recent case is that of Talisma, a customer relationship software firm, where Oak Investment Partners gained majority control and promoter Pradeep Singh had to resign as chairman but still retains a small stake.

In the software and BPO sector, too, there are other deals being clicked by VCs. But these are typically where the funds are trying to take advantage of strong front-end operations of US firms, which either wish to set up low-cost backends in India or tie up with Indian firms. For example, Jumpstartup's last five deals have been in American firms. "The only space I see opening up for startups in the Indian tech sector is product development. The future could see Indian firms with sales of $1 million being sold for $60 million," predicts Ganapathy Subramanian, MD, Jumpstartup.

But until that happens, cross-border deals will be in vogue. Take the case of Warburg Pincus, which, earlier this year, pushed the merger of an Indian IT firm, Apar Info Tech, with the Israel-based Ness Technologies. Now, Warburg had a stake in both firms and it wanted Ness, which has a huge marketing setup in the US, to acquire a low-cost, back-end, offshore base in India (Apar). Explains Arun Natarajan, editor, TSJ Media, which brings out an online newsletter that tracks VC trends: "VCs are more interested in US companies with back-end operations here."

All this does not mean that VCs are not looking at startups at all. The flavour of the month is biotech firms. Agrees Sarath Naru, MD, APIDC Venture Capital, which launched India's first biotech fund (Rs 150 crore): "As yet there are very few mature companies in the biotech space so you have to fund startups. Even with Rs 5 crore you can fund the startup requirements of a biotech enterprise." However, Natarajan feels that not much has happened in this sector in the past two years. Except for some deals like that of the Bangalore-based Strand Genomics, which raised $4.6 million from WestBridge Capital Partners, UTI Ventures and angel investors.

Then there are other sunrise sectors, which have attracted the VCs. In media, the most recent deal was when Standard Chartered Private Equity invested nearly Rs 50 crore in NDTV. And GW Capital, whose portfolio includes media, healthcare (super-speciality hospital chains) and biotech (Biocon), invested in a film distribution firm, Shingar Films. Money has also flowed into retail with both departmental stores and multiplexes reaping the benefit. But according to sources, the VC pie is still loaded in favour of the BPO sector, which accounts for 90 per cent of their existing investment portfolios.

The question in such circumstances is: will the BPO boom turn out to be like the dotcom one for VCs? Saurabh Srivastava, chairman, Indian Venture Capital Association, is optimistic: "Indian VCs have still not had a seven-year cycle," which is typically when they mature and make money. Well, one only hopes that they aren't heading for a seven-year ditch.