Or is there a greater design to this much ado about marines both in India and in Italy? 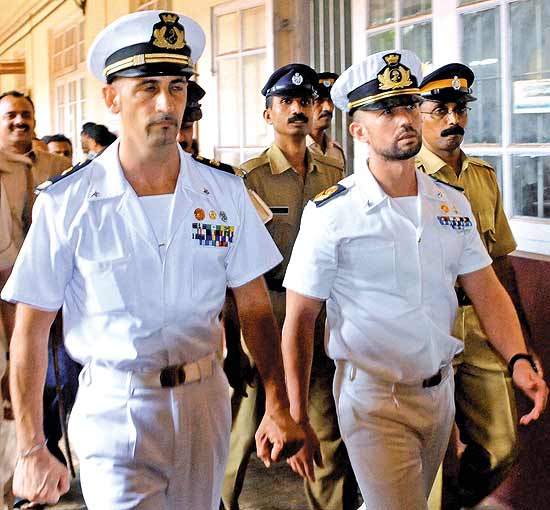 Italy is not a hyper-power like the US that evokes strong reactions from the man on the Indian street for presuming to rule the world. Nor is it a former imperial power like Britain with whom India has a history of colonial subjugation, or an expansionist nation with which India is engaged in territorial disputes. Yet, over the last quarter of a century, a series of controversies, starting from Ottavio Quattrocchi, the alleged conduit for the Bofors gun deal kickbacks, to the bribery charges in the $750 million AgustaWestland chopper deal, to the shooting down of innocent Indian fishermen off the Kerala coast—all happen to have an Italian imprint. 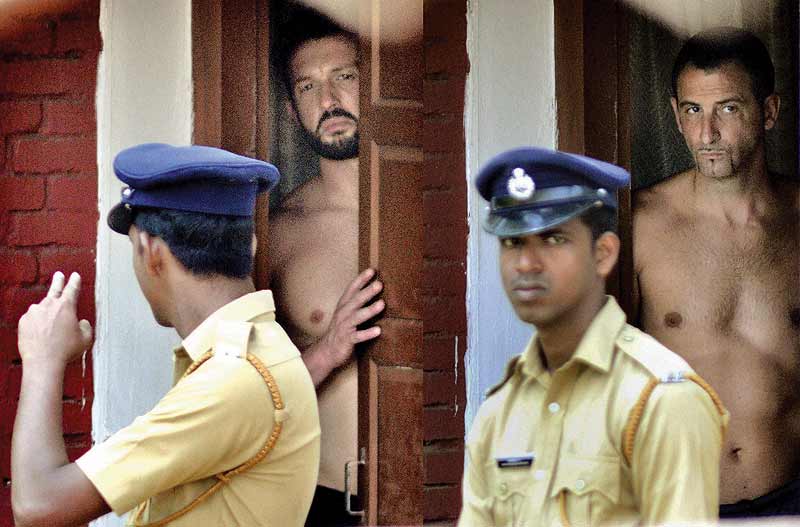 At a govt guesthouse in Kochi

If there was any chance of Italy fading away from the political discourse in India, then the March 11 decision of its foreign ministry in Rome ensured that it would remain top of the Indian mind and diplomatic matter, at least for some more days to come. That decision had to do with the country’s refusal to send back Massimiliano Latorre and Salvatore Girone, two of their marines who were accused of killing two Indian fishermen last year near Kerala and for which they had to stand trial in India. In Indian custody since the February 15, 2012, shooting incident except for a brief court-sanctioned leave during Christmas, they were to return to India on March 19—they’d been allowed a four-week leave to cast their ballot in last month’s election in Italy. What came back instead was a slap in the face of the Indian executive and the Indian judiciary, since it was on the personal pledge of Italian envoy Daniele Mancini before the Supreme Court that the duo had been allowed to leave.

“Italy has thrown us a gauntlet. India has no choice but to pick it up. They’ve put India in a very tight spot.”
Kanwal Sibal, Former foreign secretary

Outraged at the Italian decision, and under mounting criticism from the opposition parties, Prime Minister Manmohan Singh tried his best to sound ominous: if Italy failed to send back the marines, it would have to face the “consequences”, he declared. Judging by his reaction and that of his government, it was clear that the Congress-led UPA coalition realises the damage potential here: the Italian marines issue could easily snowball into a major controversy, straining not just the diplomatic ties between the two countries but also Congress’s chances in the general election less than a year away.

“The Italians have thrown us a gauntlet. India has no choice but to pick it up,” former foreign secretary Kanwal Sibal told Outlook. For the ruling Congress party, the Italian action not only dents the image of India as a rising power on the international stage. It also has serious domestic implications given that the president of the party and the chairperson of the UPA is Sonia Gandhi, an Indian of Italian origin.

The Italian ghost has, in fact, been haunting the Congress for a long time now. Since 1987, to be precise, when Rajiv Gandhi was prime minister and Bofors became the monster threatening his government. Italian businessman Ottavio Quattrocchi, believed to be close to the family, was widely alleged to have been a nodal point for kickbacks in the deal. 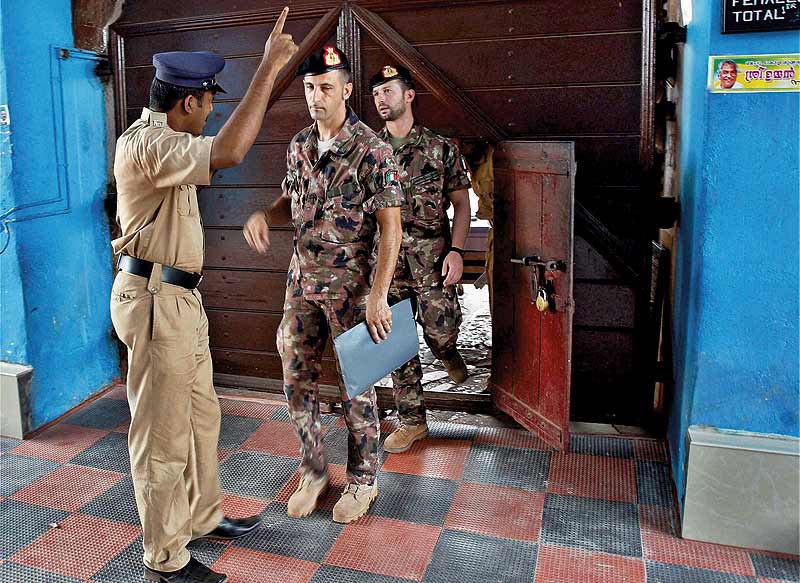 At the central prison in Thiruvanathapuram

Though nothing conclusive was proved about the Gandhis and the alleged Bofors kickback, the scandal was enough to exact a heavy political price from the Congress, costing it the 1989 Lok Sabha election. And the Italian bogey came to be stuck to it ever since, used to full advantage and at the slightest excuse by the BJP and other parties, who have missed nary an opportunity to embarrass the Congress for any Italian link that might emerge. Likewise, Congress leaders and workers over the years have become ultra-sensitive to any mention of Italy or any possible connection, especially in controversy.

“If they stick to their decision, then we can call our charge d’affaires and ask the Italian envoy to leave.”
Lalit Mansingh, Former foreign secretary

Some would say that it was the Congress’s overreaction that perhaps led to this diplomatic impasse between India and Italy. They argue that the shooting of two innocent fishermen by the Italian marines, though immensely tragic, was not a criminal act. The marines on board the Italian oil tanker Erica Lexie had fired upon the Indian fishing boat mistaking it to be an approaching pirate’s vessel.

Unfortunately, though, the incident happened at a time when Kerala was in the midst of a crucial byelection. A tough stand ensured the Congress-led coalition won the Piravom byelection and boosted its slender margin in the assembly. It also forced the Congress-led UPA government to talk tough and take a stand where it would have been possible to reach a negotiated settlement through diplomatic channels. “When it comes to Italy, the Congress is always on the backfoot,” comments a political observer.

The more diplomatic way is exactly how India handled a similar situation involving Indian fishermen and the US marines off the Dubai coast last year. In July, a US ship opened fire when it saw a fishing boat approaching it at great speed. One Indian fisherman died, while another was injured. The US marines claimed that they had issued several warnings to the boat, but all were ignored. Expectedly, the fishing team denied the American claim. 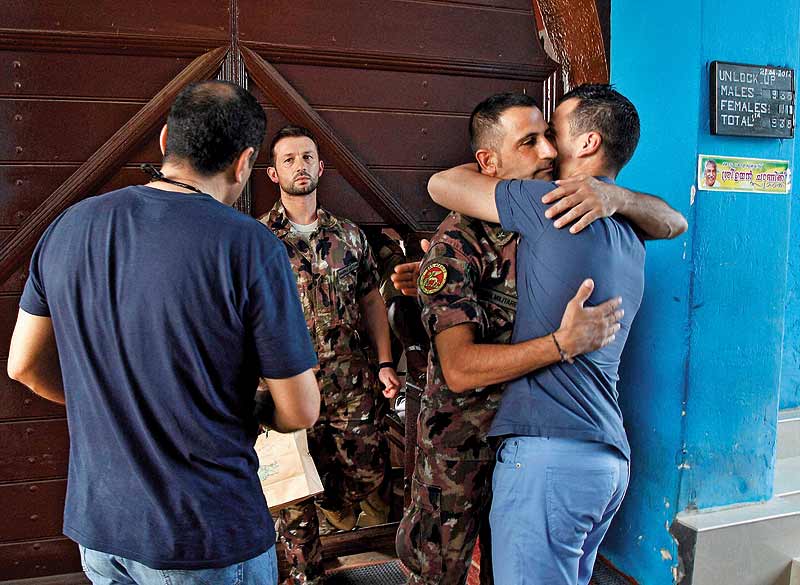 The incident, though reported widely in the media, did not dominate the front pages for days, nor did the Indian government refuse to hold a joint investigation with the Americans to look into the cause of the firing.

This could well have been due to the fact that the American incident, unlike the Italian one, did not take place on the Indian coast but near Dubai. New Delhi, therefore, was not forced to take a tough stand. The American incident was also discussed only in a few quarters and did not become a domestic issue, pulling in not just the state government, but also other parties at the Centre, all baying for Italian blood.

However, some of the Indian as well as Italian reactions remain baffling. To begin with, if India wanted to take a tough stance against the marines, why did it allow them to leave twice—once for Christmas and then last month? On the Italians’ part, if they were contesting the Indian claim of jurisdiction over its nationals to be tried in India, why did it send them back the first time round and refuse to do so now?

There’s an explanation for the last: the issue of marines being tried in a Third World country like India had become a talking point during the recent elections. The change in the Italian government’s stand may therefore have been dictated by the angry public mood. But what makes a country allow its envoy to violate his pledge before the apex court of the host country? How does Italy then expect India to take it or its envoy seriously?

There are others who see a more sinister design and connection between the Italian decision and Indian defence minister A.K. Antony’s announcement suspending the multi-million chopper deal. Could this be Italy’s way of pressuring India? “If that is so, then it is much more serious because it amounts to blackmailing India,” says Sibal. 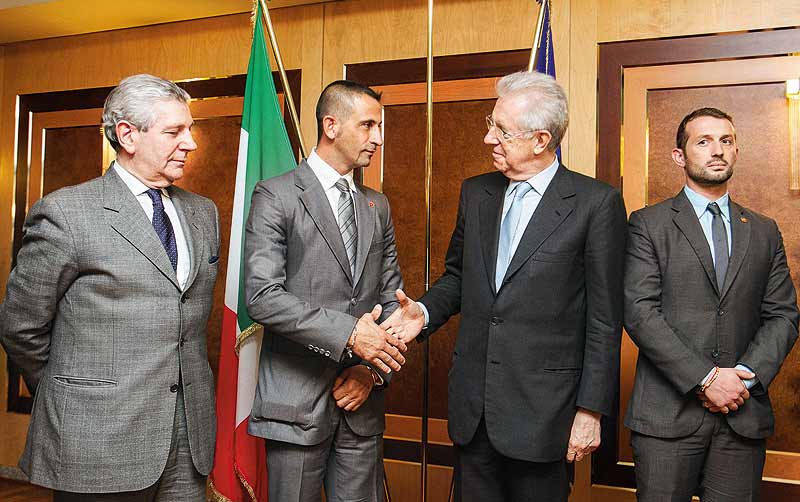 With the Italian PM

Politicians from other parties see an even more dubious game being played out. Former foreign minister and BJP leader Yashwant Sinha says he was told nearly 10 days before the event that the Italians were not going to send back their marines. “It is being done on a mutual understanding between India and Italy. The refusal to send back the marines creates a diplomatic row between the two sides, which in turn ensures that there is no cooperation whatsoever from the Italians on the ongoing investigation to find out the recipients of the chopper kickbacks,” he told Outlook.

So where do India and Italy go from here?

“We should have a graded response,” advocates former foreign secretary Lalit Mansingh. “Depending on the Italian response and if they stick to their decision, then ultimately we can recall our own charge d’affaires and ask the Italian ambassador to leave,” says Mansingh. This can be followed up with a cancellation of all political and official delegations to and from Italy and a blacklisting of Italian entities from participating in Indian projects.

Indications suggest that India is not likely to take the Italian decision lying down. But will the tough diplomatic steps be enough to deal with the evolving scenario? More importantly, as the country gets into election mode, will it satisfy the domestic audience? A lot depends on how the Congress deals with the situation—and how it is seen to be doing it. For, there is always the risk of the ‘Italian connection’ remaining a perpetual handle in the hands of its detractors. 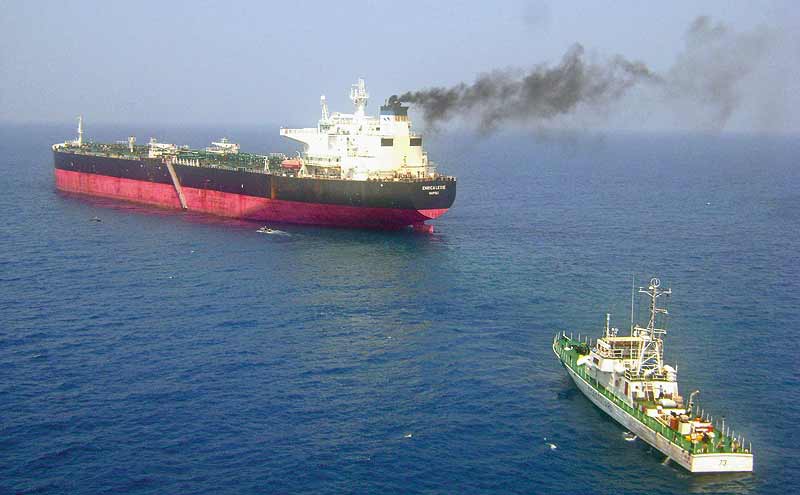 Reconcile To The Truth