A story of longing and love —and suffering, that somehow does not wring our hearts. 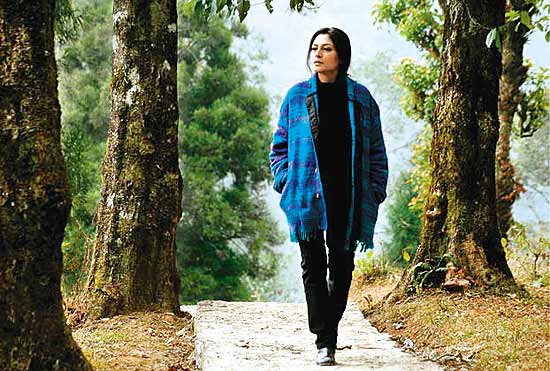 Abosheshey means ‘at last’. Sometimes, ‘at last’ can come to mean ‘too late’. In this film, directed by Aditi Roy, it is this idea that is explored, with the sensitive story of a woman (played endearingly by Roopa Ganguly) who waits for her son (Ankur Khanna) to return home. He was a little boy when his father, an ambitious man in search of a lucrative career, took him away to the US. She refused to leave Calcutta, choosing to remain rooted to her world of art and music, but longed for her son to come back. He does. Twenty years later. To wrap up legalities surrounding the property she has left for him. She has died in a car accident. The two tales of mother and son are woven together with a narrative that goes back and forth in time, sometimes merging into each other much like in the mother’s paintings, where ‘reality meets illusion’. And just as she is ‘lonely but not sad’, the predominant mood of melancholia that prevails gets lifted each time she breaks into song (Rabindrasangeet sung by Roopa herself).

Abosheshey is a story of longing and love...of regret, but also realisation. But the film remains just that—a story. All the suffering somehow does not wring our hearts.