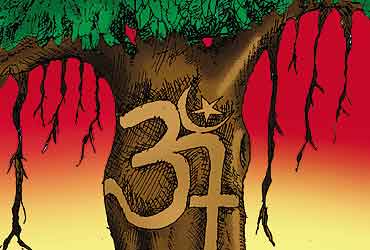 I wonder why scholars like Nandy have lost faith in the pluralistic ethos of the country. I can imagine their disgust over the contamination of the educated Hindu middle class. But I hope this is not their dialectical materialism that builds political theory on political 'fact'. According to me, they should have fought against prejudice and bias instead of rationalising them, conferring credibility on them in the process. When they claim that in India tradition and religion are synonymous, they mock at the synthesis the country has managed over the years, enabling respect for the sanctity of individual entities.

I have no quarrel with those who equate religion with tradition so long as they realise that the Indian tradition does not have the stamp of any particular religion. My difference arises when this tradition is mistaken for Hinduism. Our tradition is that of accommodating different religions and separate faiths. Secularism is a product of that process. It has gone through the crucible of tolerance and understanding. So, secularism is about not mixing religion with the state or politics.