A profound, philosophical take on life and its many existentialist crises. 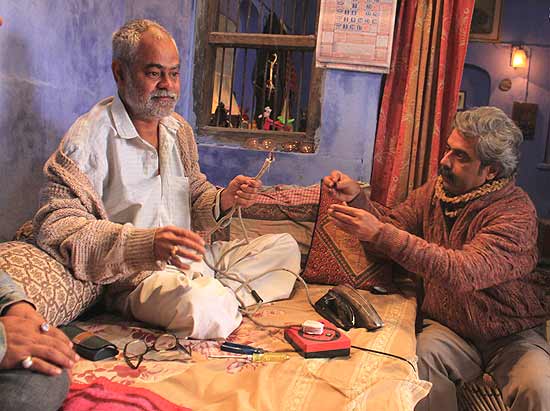 Another week, another film and yet another Delhi. This time the one that resides at pin code 110006. Not only does Rajat Kapoor get the exteriors of this world—narrow galis, crammed houses, the knick-knacks—right, it’s also a whole old-fashioned, almost lost slice of urban life that he renders wonderfully alive. Here lives intersect, support and help but also often intrude into each other’s personal spaces. Here community living is as much about grace and camaraderie as it is about interferences and spitefulness. Thankfully, Kapoor doesn’t make it an overbearing ode to old Delhi, even that famous delicacy, daulat ki chaat, makes a fleeting appearance rather than ann­ounce itself aloud.

On the surface, Aankhon Dekhi is a simple film, springing from a quirk, a whimsy. One fine day Bauji (Sanjay Mis­hra) decides to believe in only what he sees and nothing else. It begins as a quirk, a joke, and leads to some funny situations and encounters. But Aankhon Dekhi is not a fun film. In fact, it may baffle and perplex, especially with its ambiguous end. Is it about meaninglessness of life, about giving up the temporal and embracing the spiritual? It is a profound, philosophical take on life and its many existentialist crises. What happens when you decide not to belong, when you break away than conform, when you stay away from the herd? There’s the pain of being the odd one out in your quest to find more when you decide to go beyond the restrictive and search for your own truth and live in the immediacy of your own experience.

Mishra, as the patriarch, Bauji, is the fulcrum and spine of the film. At once mercurial and patient, crazy yet sane, it’s a character difficult to pull off and Mishra literally internalises it. Seema Pahwa as his hyper, nagging yet loving wife is just as pitch-perfect. So are the rest. Maya Sarao as the live-wire daughter is a revelation. The relationships are convincin­gly handled. Be it the father-daughter bonding after a fight or the brothers falling apart. They feel so real that they could well be happening in your own family.

For a change, you get to hear the kind of music where the instruments—sarangi, flute—are crystal clear and audible, the organic winning over the electronic. The songs tie up with the film’s theme and the film itself is structured like a musical piece. Some scenes are amazing in how they play out fluidly like music, elegant and lithe despite the disorder, clutter and commotion embedded in them. Like when Bauji keeps chatting with the family members while they go on with their chores. There is a harmony in the bickering, a silence in the noise. Ankhon Dekhi is a film that moves, provokes, sets you thinking and questioning but doesn’t provide you any easy answers. But it does take you on an enriching journey within if you allow yourself to flow with its current.