For the upper middle class which wants only good news, DCH hits the sweet spot. It allows them their own utopia. 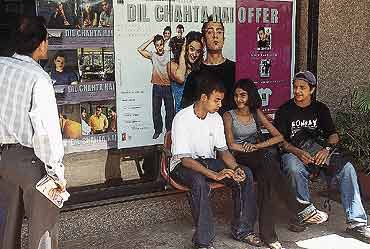 outlookindia.com
-0001-11-30T00:00:00+0553
Never underestimate the power of a good haircut. Or a goatee for that matter. Nothing symbolises the freshness of Dil Chahta Hai better than the look that Aamir, Akshay and Saif sport in the film. At one glance it communicates the discontinuity marked by Farhan Akhtar's debut, and provides the key to the strong impact the film is having in a section of the audience.

What makes dch so popular? It is fresh, frothy, and spontaneous. People are not cardboard cut-outs. The dialogue flows smooth, peppered with everyday witticisms, and seems extremely natural. For the first time it allows plu audiences to peer into the mirror called Hindi films and not flinch. It has also possibly evolved out of the work put out by the Son-of-Movie-Moghul brigade: the Karan Johars and Aditya Chopras; and the ddlj-dtph-kkhh-Mohabattein continuum.

These films marked a break with the past. For one, their protagonists were more plu than ever before. Till then the Hindi film hero was modelled on a strutting peacock—with his own distinctive plumage. Clothes of many colours helped set off his thick, curly chest hair which we saw lots of thanks to his Look Ma No Buttons worldview.

All this changed with ddlj. Designer clothes, art-directed sets and blow-dried heroes painted a cosy picture of Riverdale-on-the-Ganges. The content changed too. Earlier themes of individuals battling against the Zalim Zamana gave way to their battling with themselves. This was also the world of Soft Consequences where things worked out naturally. Rivals in a triangle were friends, parents high-fived with their children; even death seemed to have lost its sting. Rani Mukherjee died gracefully in kkhh to allow Kajol into Shah Rukh's life. In Mohabattein, Aishwarya died but led a full life as a spectral presence.

dch is a progression on this theme. The film is set in Happy Land where everyone has a Merc and no one has to work. It's a film of empty, wide-open spaces, and the wind always whistles through one's hair. Parents are full of dignity and graciousness, and well lit to boot.

What makes dch special is that it's a film about today with no reference to yesterday. Earlier chocolate-blockbusters were modern at first glance, but we soon found that the past was never far behind. The moment a Rani Mukherjee wore skirts short enough to reveal her earlobes, she had to sing Raghupati Raghav Raja Ram. After all of Shah Rukh Khan's modern posturing in Mohabattein, his ultimate place in life was as head of a gurukul.

In dch, for the most part, there is no reference at all to the past. These are people who live in today and by today's rules. No attempt is made to justify their lifestyles and the viewers are liberated from the crushing weight of the past. dch shows modernity in the daily discourse of our lives. Which is why the film works brilliantly when it is about Little Moments. The repartee, the nuanced characterisation, the insightful small cameos (Sonali Kulkarni's balloon-buying boyfriend, for instance) are evocative and natural.

Where it stumbles is on the Big Moments. Here everything conforms to the formula. Akshay has Pure Feelings for the older woman, and since he can't have her, she must die. Aamir can articulate his Real Feelings only at a really inconvenient time so that we can have a big finish and he can get to return the punch he received from Preity Zinta's boyfriend. Saif's bit works the best because his character lives only in the Little Moments.

While DCH might have been a better film had it avoided the stereotypes, would it have been as successful? I suspect not. The reason why it works is because it takes the viewer as far as s/he wants to go. The film is pretty, but not only pretty. It has substance but one is not overwhelmed by it. It is new but never radical. For upper middle class India which only wants good news, this is an offering that hits the sweet spot. dch for the first time allows this section its own little utopia.

In doing so, it also underlines a cultural division in the audience. dch proves it is financially viable to make films for plus. So far, Hindi movies catered to the same audience. True, different kinds of films did well in different parts of the country but they all spoke the same language. Everyone understood every mainstream film. Not so with dch, as the two young plt viewers behind me showed when they walked out in the second half. The opera sequence where Troilus trills and Aamir gets in touch with his sensitive side was clearly the last straw.

It is interesting that dch reverses a recent trend of a degree of cultural homogenisation. Asha Bhonsle's success with the mtv generation, Daler Mehndi's conquest of the discos and Govinda's appropriation by the plu, all point to this convergence. At the end of the day, dch is not a great film, but it is a significant one. Significant because it marks a discontinuity with movies of an earlier time. Not a great one because all it proves is that Bollywood can make a competent Hollywood film. It also poses intriguing questions for the future. Will it spur on much more experimentation and a truly new kind of cinema or will it continue to encourage feelgood pop-cinema sagas? Is dch the new face of Hindi cinema or is it only a new haircut?

(The author is executive vice president, McCann-Erickson, and writes frequently on popular culture.)