Arvind Kejriwal is certainly kicking up a storm. But will the whirlwind translate into political reform? 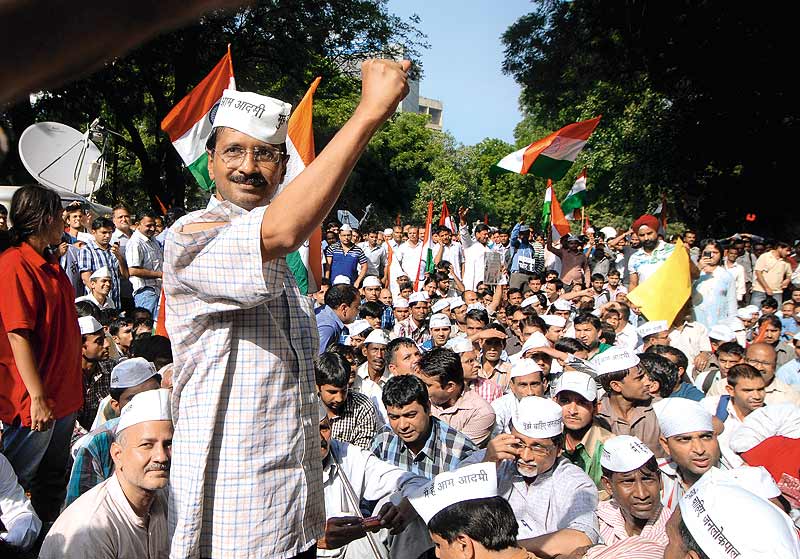 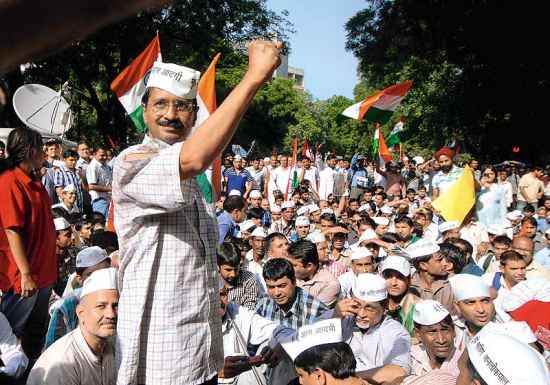 At a time when the common citizen is so burdened by the all-pervasive corruption, there is something satisfying in seeing the high and mighty exposed. Arvind Kejriwal has given us some pretty thrilling moments in that regard and his targets have been impressive. A member of the first dynasty, the president of the national Opposition party and a suave Union minister. In a system that appears to be completely weighed down by the venal, where institutions appear to be debased, there is a natural admiration for someone who has the guts to expose the rot and take on the big fish. The defence of the ruling class has ranged from serious critique of the legal strength of Kejriwal’s charges to conspiracy theories about him being a front for a sinister cause or a general nervous carping: who is he, how could he, how dare he....

This is the mango man who has become a real irritant for the system in New Delhi. In political terms, he may well have inflicted serious damage to the Congress’s already dented image with the Robert Vadra charges and started a debate within the RSS-BJP on how advisable it is to give president Nitin Gadkari a second term in December. Sources in India Against Corruption (IAC) say it has more political targets, but their other big plan is to take on the corporates next: material is being collected on biggies who have interests in oil and natural gas.

In the Kejriwal version of the civil disobedience movement against inflated power bills in Delhi, where he went about restoring connections that had been cut for non-payment, he has already taken on both the Sheila Dixit government and the Reliance-owned BSES. There has also been sharp rhetoric against Anil Ambani. Says advocate Prashant Bhushan, “Arvind has understood that anyone seriously interested in fighting corruption has to take on the corporates. So, analysts missed the woods for the trees when they did not realise this would happen ultimately and kept harping on the RSS presence in the early rallies and the grant given by the Ford Foundation.”

“Ours is a grassroots organisation inclined to support Kejriwal but the final decision will be our workers’.”
Rajeev Godara, President, Sampoorna Kranti Manch, Haryana

A lot of drama has unfolded before TV cameras ever since the Anna Hazare movement began in April last year. The transition from then to now is significant. Then Anna and Kiran Bedi were key players, and the movement was about pushing an anti-corruption legislation. Now Anna is no longer with the movement, and a new political party (name undecided) is set to be launched shortly. It is time to examine whether the fundamentals of this force, still in the process of evolution, are changing.

There is an attempt by certain members of the core team to link the movement with people’s struggles across the country; they are establishing contact with the leadership of small parties and movements. Says political scientist Yogendra Yadav, “The idea is that this new party could become the instrument that people’s movements have lacked.” The vision document released by the group on October 2 made an argument for entering the political fray with these words: “Politics is the centrestage of the present system, the stage where the system is made or unmade...someone has to accept the challenge of stepping on this stage.”

And since this group of citizens plans to take the plunge next month, it is also important to examine if it is indeed a mere front of the RSS. Given the current shifts and turns, one can discern a strong move from within to actually distance itself from the legacy visible at the beginning. Of course, certain idioms and symbols have been retained. For instance, Kejriwal and friends try to tap nationalism and repeatedly use slogans such as Bharat Mata ki Jai. “We need to reclaim slogans people identity with,” says Yogendra Yadav. “There is no denying that the RSS tried to infiltrate the movement as they intelligently saw the possibilities within it. But now we have taken a different turn.”

There is, of course, the argument that the movement will ultimately damage the Congress more than the BJP as the ruling party will have to battle the disgust and anti-incumbency at the national level. Kejriwal himself is at pains to say, “For those who feel we are targeting the UPA or are the B-team of the BJP, our aim is to expose the crisis of leadership across the spectrum.” Indeed, documents and papers about scams across the country are being handed over to the group and there is a feeling that individuals who may not have otherwise spoken out or acted in particular cases will be encouraged to do so now.

Ultimately, though, politics should be about something more profound than just damning individuals. It has to be about a transformation that is deeper than the sensational and garners more than the immediate satisfaction from naming and shaming. Which is why trying to take on corporates and reaching out to social movements, several against land acquisition, seem good ideas. The question, however, is: if the energy of the Anna Hazare consciousness came from the basically aspirational middle classes, will it not be in social conflict with the rural poor who seek justice and preservation of jal, jangal, zameen through movements? Would the movement possibly risk trying to be all things to all men? Whatever the answer, the process is certainly worth analysing. Kejriwal himself is brimming with ideas, is open to them, is not ideologically brittle and seems to have the energy which makes for charismatic leadership.

In the short term, the new party may not really be able to take on the big players but could certainly contribute to creating the atmosphere in which a new politics can be played. The national capital, of course, is the main stage and when the assembly elections take place next year, they will be the first the Kejriwal formation will contest. There are also plans to shift to start state-specific campaigns. Which is why Yogendra Yadav says “it is too early to say that the BJP will get the electoral advantage. Who is hurt by corruption changes from state to state.”

Which brings us to our next question: do Kejriwal & Co have a presence outside Delhi? The report card from across the country shows great curiosity value for the outfit but little presence on the ground in most states. The tricity of Chandigarh, Panchkula and Mohali has a unit of the IAC with about 500 active members. Says its president Kamlesh Bhartiya, “After Diwali, we are launching a membership drive and this office will coordinate our activities in Punjab, Haryana and Himachal Pradesh.” The fledgling party has certainly generated interest in the region, particularly as the Vadra scam involves land in Haryana. Certain groups are now exploring how they can associate with Kejriwal’s party. Says Rajeev Godara, president of the Haryana social activist group Sampoorna Kranti Manch, “Ours is a grassroots organisation which is inclined to support Kejriwal’s party, but the final decision will lie with our workers who are scheduled to meet sometime this month.” But Godara admits that the new party will be hobbled by the lack of an organisational structure and though it will get plenty of volunteers from all walks of life, they will have their own limitations and electoral politics is an entirely different game.

In Mumbai, it’s not too difficult to find the IAC office in Andheri East. Commuters in the area respond eagerly to casual inquiries on the street, offering detailed directions to reach the IAC “back office”. Everyone seems to know the way to the one-room office. It’s the reference points that differ. The business executive stepping out of the Skoda showroom that is a landmark to their address on the IAC website offers, “The corruption guys? Down the road on the right.” For the paanwallah busy doling out paans for his customers in his shop across the IAC office, the recall value is simpler, “Anna Hazare office? Just ahead, on the right hand corner.” The Anna-Kejriwal split hasn’t registered in his head yet.

Outside the modest building, children from the neighbourhood point to the back entrance. No boards announce the IAC’s presence here, but large cutouts of Kejriwal do. The five-odd volunteers in the office are clear about where they and the movement is headed. They say 9,000 people have signed up to become volunteers for the movement since the launch of the political party on October 2. They are a mix of young college students, housewives, mid-career executives working in MNCs and small-time businessmen who have filled forms and submitted photographs to become registered members of the movement. Big file folders hold these resumes, each with an attached declaration form filled by the member, confirming he or she will not align with any political party once they sign up with the IAC. Another section restricts members from interacting with media personnel without proper authorisation. The objective, repeated ad nauseam by volunteers in the office, is also stated clearly: Create awareness about the IAC’s mission, stage protests against corruption and search for and motivate honest, enthusiastic volunteers to join the mission.

By their own admission, volunteers recount how it is difficult to rope in people in a city like Mumbai, where there is great curiosity but no great conviction. A senior volunteer admits, “We were holding a protest march at Shivaji Park the other day. There must have been as many as 300 people sitting on the side pavement, looking at us walk past, staging a protest. But only about 12 came forward to join us. The rest just kept sitting and watching.” So what then could be the solution to break this barrier? For one, the volunteers slog over the IAC Mumbai website and the many phone lines that connect the curious to the IAC through its well-advertised helpline stay open 24x7. The group also has an active mobile phone number flashed on its website, a missed call to which ensures that information about the goings-on at the IAC are sent across as regular smses. The number of those availing this facility in the Mumbai region telecom circle has now dwindled to 7 lakh from the 13 lakh last year in December when Anna Hazare was fasting at the Azad Maidan in Mumbai. The group also works hard at organising induction programmes, attracting people with street plays and small rallies. For the regulars, Saturday meetings are held in one of the various 15 zones of Mumbai, where success stories of localised sit-ins are shared, complete with an inspirational lecture by Mayank Gandhi, the face of the movement in Mumbai. The most recent to be organised is on October 20 in Vile Parle.

Haryana and Mumbai are all centres of great corruption. As is Hyderabad, the capital of Andhra Pradesh, the state said to have pioneered the path to crony capitalism of the politician-businessman. Here too there is great curiosity mixed with a sense that what the IAC is doing is sensational stories, not any serious political challenge to the established players. In fact, TDP president Chandrababu Naidu has not even mentioned Vadra or Kejriwal even though he is the midst of a padayatra that focuses mainly on corruption.

Yet, it’s clear that a non-traditional political player has arrived, a demolition man determined to seize the moment and shape the future discourse. His journey is proving to be a fascinating one, creating in the short term ripples which in political parlance can be termed “hawa”. The challenge is to transform this to the long term and have an impact in the states.

Kejriwal and his team are attacking the biggies in every party, and not even sparing institutions like the judiciary

Grass In The Wind