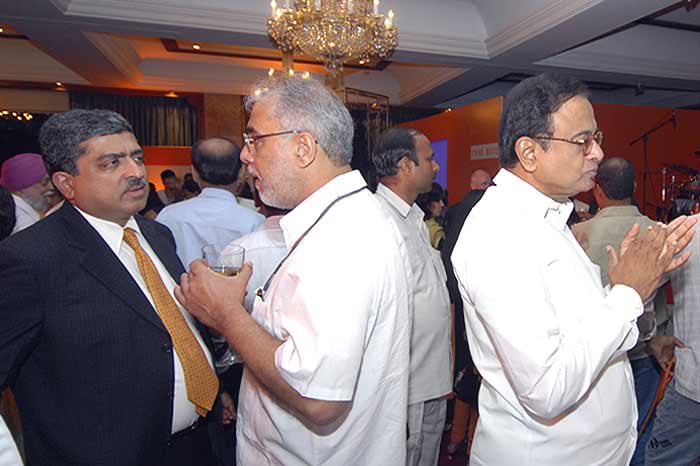 A year ago, Nandan Nilekani operated out of a small, makeshift office with just the bare essentials. Today, the plush, wood-panelled office of the Unique Identification Authority of India chairman bears witness to the estimable rise the 52-year-old Nilekani—and his pet Aadhar project—has seen in the past 18 months. Despite many doubters, the co-founder of Infosys has led a charmed existence in government, feted for his business-like approach in stewarding the project to give identity numbers to millions of Indians, an exercise unprecedented in scale globally.

The calm inside Nilekani’s office, however, doesn’t reflect the storm raging outside. Over the past few months, Aadhar has been the subject of a viral attack from various quarters—cabinet colleagues and bureaucrats, policy experts and activists, even a few state governments. Everything, from Nilekani’s procedures for data collection and the potential errors therein to concerns over privacy, is being questioned. Besides, the existence of an older exercise, the National Population Register (NPR), led by the home ministry, is threatening to derail the project.

While most accept the need for creating a systematic database of our citizenry, the path to be taken for this has created a vertical divide in the government and is leading to a turf war—or, as a PMO official tartly put it, “personality issues”. The debate has now reached the highest levels, involving the Union finance minister, the home minister, the Planning Commission, the Registrar General of India (RGI) and the PMO itself.

“It’s not Aadhar standards, our objection is to data collection by registrars whose orientation is different from us.”
Dr C. Chandramouli, RGI, census commissioner

Many in the government, and even in bureaucratic circles, cannot align with the way Nilekani has been running his project and the powers the government has given him. This has won him many enemies who’re attacking Aadhar. Some call it jealousy. Others see it as Nilekani pushing the limits of a technocratic approach to getting things done in government. His methods have raised concerns.

Fortunately for Nilekani, he is being backed at the highest level—by finance minister Pranab Mukherjee and the PMO. With Rahul Gandhi too invoking UID in his recent speeches, the weight of the Nehru-Gandhis too is behind him. With such powerful friends, why then are Nilekani’s opponents running riot?

Recently, home minister P. Chidambaram opened up a new flank by declaring that the authentication data by UIDAI does not satisfy security criteria and urged the cabinet to take another look at it. Chidambaram’s views found resonance in many quarters pushing the NPR as the de facto mode of identifying residents. 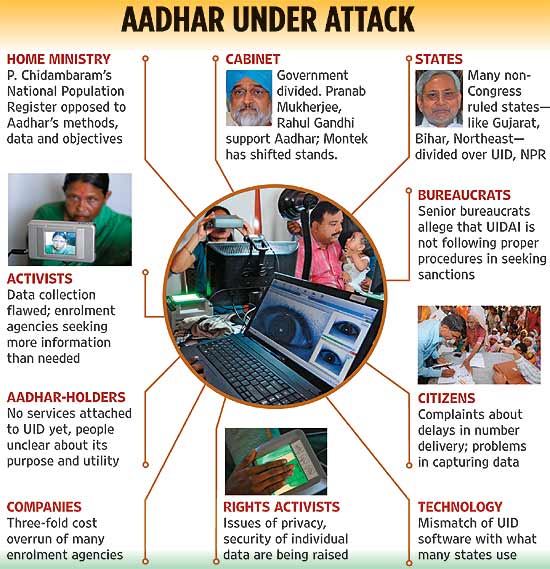 At the centre of the debate is the UIDAI’s process of using multiple registrars and enrolment agencies to collect individual data as well as its system of relying on ‘secondary information’ via existing identification documents. While Nilekani feels this is an effective method, NPR protagonists are pushing for a method of public scrutiny in which individual data is collected directly and put up before the public to weed out any fraud.

This many-layered screening process used in NPR is what, in fact, helped villagers in Gujarat’s border areas expose ‘strangers’ (from Pakistan) on the rolls when the data was put up for public scrutiny. This reinforced the RGI’s belief that the NPR process, despite being long and painstaking, is more foolproof. The one meeting point with Aadhar is the biometrics technology, which NPR has adopted. “We are fully governed by Aadhar standards for biometrics,” says RGI and census commissioner Dr C. Chandramouli. “Our objection is to the data collection by other registrars who have a different orientation from ours. From a security point of view, they are not acceptable.”

“Even Prisoners’ Act provides that fingerprints be destroyed after acquittal. In uidai such data can be stored forever.”
Gopal Krishna, UID activist

Initially, it was felt both programmes could pool their data and share information. But the home ministry has refused to use UID data for NPR. In a communication to the Planning Commission last month, Chidambaram said: “The RGI or the MHA does not have the competence to alter the procedure or to accept any data that is in violation of the procedure laid down.” Stressing that it is the prerogative of the government alone to alter the process, Chidambaram stated that if statutory processes have not been followed in collecting demographic and biometric data, the NPR cannot accept it.

The discontent was fuelled last December when the UIDAI got the finance ministry’s nod to go beyond 100 million enrolments to 200 million. Says a senior bureaucrat who declines to be identified, “Nilekani ought to have taken permission of the cabinet committe on UIDAI or quickly thereafter gone for ratification (by the cabinet). Instead, for more than 6-7 months, the matter never came to light.” The charge: the UID unilaterally kept shifting the goalpost, which resulted in expenditure not being approved by the competent authority.

From voicing concerns over UIDAI operations, Planning Commission deputy chairman Montek Singh Ahluwalia is among those who have shifted stance in the last few months. In August this year, the Planning Commission had shared with the home minister concerns over the overlap in enrolment and said that processing the independent proposals of RGI’s Rs 10,00-crore and UIDAI’s Rs 14,841-crore for universal coverage “would violate the specific mandate of the cabinet committee to avoid duplication”.

But in his cabinet note earlier this month, Montek made a clear pitch for UIDAI while giving options to take NPR and Aadhar forward. “I have suggested four ways in which duplication can be avoided. It is for the cabinet to decide,” he told Outlook. Some of his suggestions are contrary to the expressed view of Chidambaram, including allowing UIDAI to continue Aadhar operations without providing government funding.

UIDAI’s processes have also come under flak from activists. Says legal expert Usha Ramanathan, “The whole emphasis is on enrolment with no planning on how this is going to be used. And to push the agenda of enrolment, they have a multiplicity of registrars, which is leading to duplication as people who do not get their numbers within a stipulated time are re-enrolling.” She also points to a dichotomy in UIDAI’s approach—it has always said getting the number is a voluntary affair but is pushing service providers to make it mandatory for availing those services. UIDAI’s system of using introducers to identify and provide numbers to the homeless and those without documents is another grey area.

“All emphasis is on enrolment, not on how it’ll be used. Besides the duplication, the whole biometric thing is so illegal.”
Usha Ramanathan, Legal expert

As of now, the numbers are coming, but with considerable delays. While the agencies say the numbers will be issued in about 90 days’ time, in most cases, it takes between four-six months. Says a senior official from an enrolment agency, “Many agencies are asking for additional data but they are not communicating to the people that everything is not mandatory and they don’t have to fill up everything in the form.”

In particular, there have been many issues with UID’s biometric data collection. Labourers and poor people, the primary targets of the Aadhar process, often do not have clearly defined fingerprints because of excessive manual labour. Even old people with “dry hands” have faced difficulties. Weak iris scans of people with cataract have also posed problems. In several cases, agencies have refused to register them, defeating the very aim of inclusion of poor and marginalised people.

Activists also question UIDAI’s authority to collect biometric data. Says human rights and UID activist Gopal Krishna, “There is ambiguity about biometric data. It is not clearly defined in the National Identification Bill. UIDAI also provides for storing biometric data like fingerprints forever while even the Prisoners’ Act provides that this data should be destroyed on acquittal.” Adds Ramanathan, “The whole thing is so illegal. Every statutory organisation can only act within a given mandate and citizen’s rules do not provide for it. The Citizenship Act has nothing on biometric data.”

While Nilekani asserts that the best systems are being put in place for security and no data will be shared, it hasn’t helped dispel fear. Some states, in fact, are holding back.

On the ground, enrolling agencies too are facing problems. They are finding it difficult to get people to enrol in rural areas. Says Binod Mishra of Glodyne Technologies, an enrolment agency: “Initially, it took about Rs 22-24 per number, now the cost is many times that amount.” Other agency officials say that despite the project being targeted at financial inclusion, it takes a long time to convince villagers to enrol as they are not sure what benefit UID will give them.

The crucial question now is whether Aadhar will survive in its present form beyond the 200-million cap. In early September, the Expenditure Finance Committee, at which the UIDAI is also represented, debated the proposal for extending Aadhar enrolment beyond 200 million individuals. The meeting did not conclude in Aadhar’s favour. In the same month, UIDAI put in a fresh proposal for universal coverage under Phase III, thereby raising concerns both in the home ministry and the Planning Commission.

In the end, though, what matters is who has more support. While PMO sources say everything will be “sorted out” when the cabinet meets next month to take a call on UID’s future, the attacks on Aadhar show that even technocrats have to tread carefully.

She Doesn’t Call Me Dad