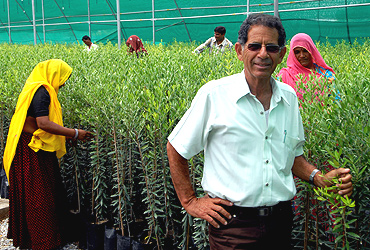 If an agricultural experiment currently under way in Rajasthan bears fruit, local delicacies like laal maas and ker sangri may soon acquire an exotic flavour—the fruity aroma of olive oil. Some 160 km from Jaipur, along a broken dusty road, a thirty-hectare field near the tiny village of Basbisna is the site of this ambitious experiment. This unpromising patch of land, a mixture of sandy soil and scrub jungle, was thought to be uncultivable, and so had always lain barren. But now, with state-of-the-art drip technology, imported olive plants and an enthusiastic Israeli technical manager, this corner of the Thar desert looks all set to bloom. Seven thousand fragile-looking olive trees, planted in neat rows, are being tenderly nurtured by local farmers and their supervisors.

None of them, however, has seen an olive before. "We are growing oil," says a young Basbisna villager vaguely, while site supervisor Ram Lal Yadav, a PhD from the Rajasthan Agricultural University, grins as he confesses, "I've never eaten an olive or used olive oil". All that the 20 men and women who work on the field know is that this is a new crop and provides regular paid work. That is the sum of their knowledge.

The Rajasthan government is hoping this will soon change and olive trees, which need comparatively little water and can grow on sandy soil, will become a good new source of income for its farmers and spur the greening of the state. The project, a personal brainchild of CM Vasundhararaje, originated with her visit to Israel in May '06 with an Indian delegation interested in Israeli agricultural experiments. At the Ravivim kibbutz in the Negev desert, Raje was struck by the sight of a 400-hectare field of olive trees, growing in sandy soil that seemed so similar to Rajasthan's and immediately asked if such a project could be replicated in her state.

By April 2007, the Rajasthan Olive Cultivation Limited (ROCL) had been formed and the state government allotted seven 30-hectare plots of land in widely separated districts across the state for the project. "We wanted to make sure we covered all climatic conditions," explains Surendra Singh Shekhawat, COO, ROCL. "Although there are wild olives growing in Jammu, Himachal and the terai belt, and also some research projects, nothing on this scale and with such care has been tried before." Over 1,00,000 saplings of high-yielding olives, just an inch high, arrived from Israel and were brought to a height of 1.5 metres in nurseries, before being transplanted to the fields.

The man ROCL is counting on is Gideon Peleg, the Israeli technical manager. "I learned to put up fences as a rancher, windbreaks as a farmer and cared for fruit as an orchard manager," he says. "Every bit of my experience in Israel over the last forty years is being used here." Burnt brown by the Rajasthani sun, he has been nine months on the job, and is impressed by the hard-working farmers, but baffled that the technology is so limited. "With the right technology, people here could do so much."

In this case, the right technology means drip irrigation, and a system of "fertigation" pioneered by Israel. Rubber and plastic tubing snakes across the fields and small plastic feeders drip water straight to the roots of the olive plants. Along with the water come small amounts of fertiliser that have been precisely measured. While much of the technology initially came from Israel, it is now increasingly available in India with all the pipes and fittings built by the Pune-based company, Finolex. Since the Centre provides a 50 per cent subsidy for micro-irrigation and the state government adds another 25 per cent, the cost of installing a basic system is under Rs 10,000 for a 30-hectare field. 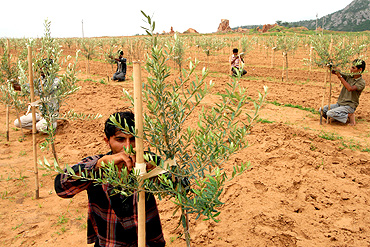 Olive plantation in the Thar desert

The low costs and high hopes are exciting interest among the farmers in the area. Virendra Singh has come with his friends from Gardana Kalan, a village a few kilometres away from Basbisna, to see how things are going. He plans to plant olives on his six hectares of land if the Basbisna experiment is successful. The rows of olive trees are 7 metres apart, so that farmers can grow groundnuts on the land between the rows and start earning from the land even before the olives bear fruit. It takes three-and-a-half years before an olive tree starts bearing fruit, after which it keeps producing for hundreds of years. Farmers in Basbisna and six other olive plantations have another two years to wait until they can see—and sell—their first olives.

The olives under cultivation by ROCL have already been pre-bought by an Israeli company called Indo-Olive, which will set up an oil pressing plant and sell the olive oil overseas. They're also counting on a growing demand for olive oil, with its much-touted health and gourmet qualities, in the Indian market. India imported 1,500 tonnes of olive oil in 2006, and in 2007, the amount went up to 2,300 tonnes—a 53 per cent growth in just one year. This growth in domestic demand is what's exciting aspiring farmers and the ROCL "We've already been in touch with the Indian Olive Oil Association, a group of olive oil importers," says Shekhawat.

But there are formidable challenges ahead. Fifteen years ago, Thakur Ram Pratap Singh imported olive saplings from Israel and planted them on his land in Ramgarh, near Sikar, but they swiftly shrivelled up and died. Temperatures in the Israeli desert only reach 40°C, while those in Rajasthan hit 49°C, with the heat intensified by strong winds. "In my case, the olive trees flowered in April-May," says Singh, "just as the hot wind started blowing, and they literally singed off the trees." This time, Rajasthan's seven olive plantations have taken special care to protect their trees from the harsh climate. Apart from specially built bamboo supports for the trees and sensors that monitor the health of each plant, all the plantations are on undulating land, surrounded by scrub jungle which provides additional insulation from the heat and wind. "Everything is now in place for us to succeed," says Peleg happily. If he's right, two years from now, your martini would still be imported, but the olive in it may well be from the sand of Thar.