‘A White Rocket Rose From the Water’

From under the ocean the SLBM emerged and with a low rumble shot into the sky. It arced on to blast an ‘enemy city’. 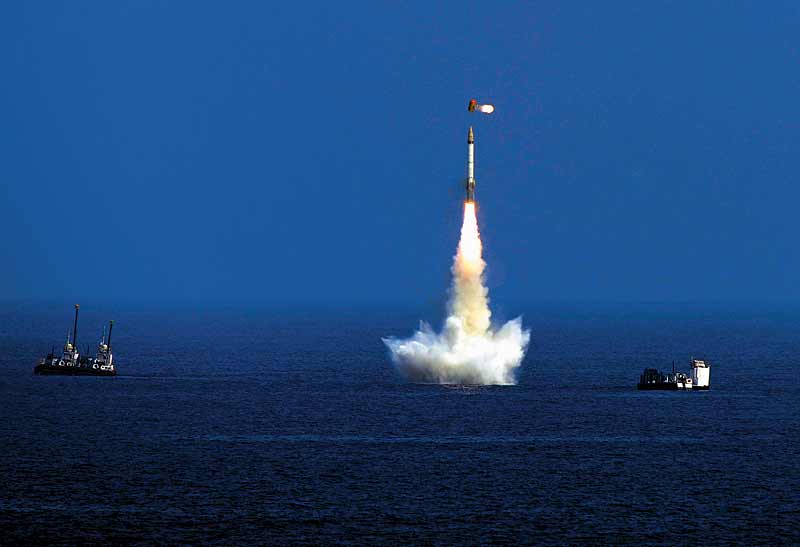 On January 27, a balmy Sunday, when all of India was soaking in the last of an extended weekend, somewhere in the Bay of Bengal, some 200 scientists, working in small teams on a flotilla of ships, coordinated their expertise to launch a missile in complete secrecy. After they reported an elated success at 1:40 pm, India announced for the first time the possession of a submarine-launched ballistic missile (SLBM). This completes the acquisition of the nuclear  triad: the ability to launch nuclear missiles from land, air and sea. Plus, India robustly reinforces its credible nuclear deterrence and joins the US, Russia, France and China in having the capacity to launch a missile from under the sea. The SLBM, codenamed B-05, was fired from an underwater platform, a submerged pontoon of sorts, simulating a launch from a submarine.

I was witness to overjoyed scientists dancing like frenzied teenagers on the ship deck. I and cameraman Alphonse Raj were the only media team allowed to witness the historic launch. There had always been speculation that the  Defence Research and Development Organisation (DRDO) has been testing such missiles for some time now, but questions on the topic were always met with suitable denials. Possibly for subterfuge, the project was variously known at various times as Sagarika, K-15 and Dhanush. DRDO revealed that Sunday’s launch was the 14th consecutively successful test of this missile system and that its scientists have been at work on this for more than a decade. “Launching a missile from below the sea has its own complications,” says V.K. Saraswat, missile scientist and scientific advisor to the defence minister. “The rocket has to be propelled through salt water, then through air and then, after going up into space, it has to strike a faraway target on the earth’s surface.” None of the technologies required for this is available off the shelf; painstaking research & development was the only solution. No wonder the scientists were exploding with joy.

Stealth is key to such missions. I was woken up at 2 am, driven through the deserted streets of a city on the east coast of India, led up a rickety ladder to board a ship. Sharp instructions: “Please don’t! Don’t take any photos of the ship.” The scientists were on board. Within minutes of my settling in my bunk, the shp sailed out. We were in the open sea and part of a flotilla. “Be patient,” I was told, “You’ll witness a sight never seen by a journalist—a rocket emerging from the depths.” The countdown began a few hours before launch time. Initially, the scientists were very relaxed. Twenty minutes to launch, there was silence in the control room, rigged together using shipping containers on the deck. 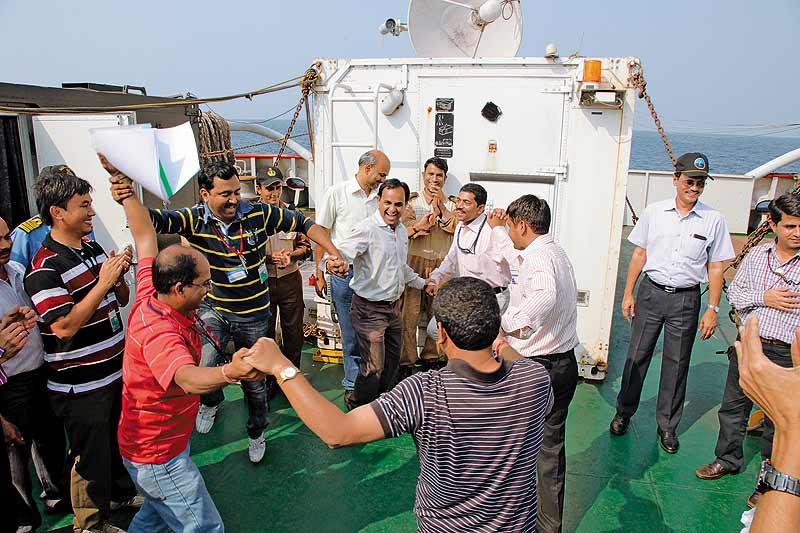 The launch team members tensed as an unidentified boat on the horizon showed up on the radar. “Tiger must be notified,” I heard the controller say over the wireless. It turned out to be a friendly vessel—the countdown continued. A minute before launch, I was told to direct my gaze towards a specific point to the south. Zero. Belching fire, a white rocket emerged effortlessly from the water with a low and gentle rumble and shot off into the sky leaving a white trail. The work of the scientists assigned to monitor the underwater trajectory was over, so they emerged from their container, cheering, clapping, blowing flying kisses to their baby in the sky.

The next minutes were tense for those monitoring the missile’s trajectory in the air and in space. Plotted on their monitors was a pre-generated ‘ideal’ trajectory. Tracking devices drew onto this the path the missile was taking: it was a copybook match. The scientists watched with elation. As the missile neared the Andaman & Nicobar Islands, it made the required diversionary manoeuvres to ward off hypothetical missile-downing efforts from the enemy. Every time this happened, the cheers became louder. A joyous Antony Joseph, the vehicle director, proudly told me the two-stage rocket they made in Hyderabad was an “intelligent missile” capable of outrunning anti-missile weapons. He also said the warhead—not nuclear-tipped, as this was a test—had exploded with precision at the coordinates of the ‘enemy city’. Mission accomplished.

The entire team of scientists poured onto the deck and started dancing. They hoisted A.K. Chakrabarty, director of the DRDO lab in Hyderabad, to their shoulders. He was the mission director and desinger of the missile. With tears in his eyes, Chakrabarty said, “This is my swansong and these are tears of joy and ecstasy,” said Chakrabarty, who is retiring by month-end, with tears in his eyes. “The launch could not have been better than this. This was the last developmental flight of the missile and this weapon system is now ready to be mated with ins Arihant, India’s nuclear submarine.”

The boffins seemed sure that all would go well: they’d already brought along a large chocolate cake to cut and distribute in celebration. The team leaders and their merry bands drowned their tension, singing and dancing with abandon.

My tension level was rising: I had to wait longer for getting a final go-ahead from the “chief” before I could announce that the killer mission—a closely held secret for years—had been successful. I was then given a satellite phone to share the news with the world that India’s promise of a punishing second strike  capability—one that could even come from under the ocean—was no hollow threat. Mission over, most of the scientists went to sleep like babies. My day ended after 23 hours of gruelling work: trying to understand the technological side of how water and fire were united in the interest of national security.

(The writer is science editor at NDTV and correspondent for Science.)

An Open Slot For Bitter Pills