A Whiff Of Vogue

Wasn't exactly Paris, though the influence was. Even so, the West liked what it saw on the Indian ramps this season. Verdict? Sold. 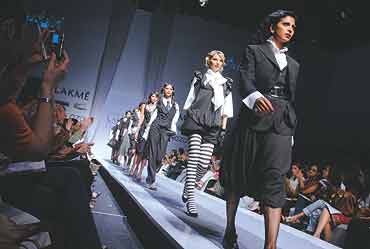 outlookindia.com
-0001-11-30T00:00:00+0553
The most insightful comment on the Indian fashion weeks came, unwittingly, from a well-known Hindi journalist. Sitting in on Manish Arora's collection during the Wills India Fashion Week, she said it reminded her of her village in UP. "Women living in jhopdis would often wear such garments...patch after colourful patch lovingly stitched with swathes of silver and gold gota."

One couldn't be sure whether the lady's statement was laced with sarcasm or tinged with nostalgia, but it did reflect how fashion continues to be an entity conceptually elusive to a majority of Indians.

Not that it is deterring organisers of fashion weeks, whether Lakme's or Wills India's. Far from it, they are capitalising on a rich and aspirational middle class and an international market high on ethnic chic. And judging by the success of the twin fashion weeks, despite the much-publicised split, they seem to be on the right track.

The LFW managed to get some half-a-dozen buyers including Saks Fifth Avenue, New York; Browns London; C.K. Tang, Singapore; Lord and Taylor, New York. WIFW fared even better: it netted over 70 buyers from 12 different countries, luring such heavies as Bloomingdales, Europe; Harvey Nichols, London; Maria Luisa, Paris, and Harrods, London. On the domestic front, stores like Kimaya did double the business they did last year.

"In India, foreign buyers are always on the lookout for traditional crafts in international packaging, and some of our designers manage that pretty well," says Harmeet Bajaj, fashion consultant. What our designers cannot manage very well is consistency in quality, something that really puts off the international buyers. Loose threads, untidy hems, weak tailoring, unironed fabric have become the trademark of most Indian designers. "Also, they need to go easy on ethnic influences," says Chor Wai Fung of C.K. Tang. Sangita Kathiwada of Melange and Fern Mallis, VP, IMG Fashion stress how important it is for our designers to improve work ethic and production infrastructure. "If some buyer places an order for 4,000 units to be delivered in a month's time, how many designers will be able to meet the deadline?" asks Fern.

The hemming and hawing apart, the firang factor is changing Indian fashion, which had always been anarchically individualistic, for the better. Earlier, it would be fur for spring-summer and swimwear for autumn-winter. Now, with foreign stores beckoning them, Indian designers are making some serious effort to fall in line with current international trends—minimalistic designs and a sombre colour palette reminiscent of a Mark Rothko easel. Mud brown, moss green, grey, black-and-white now find prominent space on the usually hectically coloured Indian ramp.

So it was at both the LFW and the WIFW. The majority of designers stuck to the international basics for the season—Victorian silhouettes like dresses and skirts, trench coats, highlighted waistlines, lace and crochet—and its favoured muses. Kavita Bhartia and Shantanu-Nikhil Indianised the Audrey Hepburn look, Ranna Gill and Shantanu Goenka drew inspiration from Queen Elizabeth and Azeem Khan from Marie Antoinette. The rose motif showed up in a lot of collections. Raghavendra Rathore and Satya Paul experimented with Art Deco prints.

Moral of the story? Wanna know what's up Indian designer sleeves for the next season in October? Just flip the pages of Vogue and Harper's Bazaar.