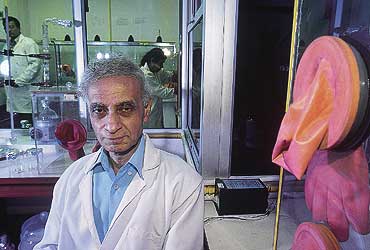 Just as infertility is seen as a feminine foible, contraception too is widely perceived as a woman's headache. While scientists have invented half-a-dozen varieties of female contraceptives, the condom was the only possible non-surgical male 'intervention' against conception.

Till now, that is. An IIT Delhi professor, Sujoy K. Guha, has developed a male contraceptive, which, if successful, could make a significant dent in family planning policies. The phase III human clinical trials, which began last year in three Delhi hospitals, are now being expanded to a few more centres. The contraceptive is expected to hit the market in the next 3-4 months. It will cost Rs 70 in India, Guha says. Patents could take that to about $500 in the US.

Engineer-doctor Guha's labour of love, the new contraceptive is a well-crafted assassin-molecule which literally loves headbusting sperms. Guha, now in his mid-60s, claims his 'spermguard' is trustworthy, doesn't meddle with other normal functions of the body, leaves sexual pleasure and performance unaffected and, perhaps most remarkably, a single dose is enough to keep the sperms at bay for at least 10 years. And if that isn't enough to convert the reluctant male, the procedure can be reversed should the Darwinian imperative assert itself again.

Called RISUG(acronym for Reversible Inhibition of Sperm Under Guidance), the drug is injected into the vas deferens, the first rollercoaster the sperms ride as they break out from the testes to orchestrate an orgasm. In the clinical trials, men left the hospital immediately and resumed normal sex lives as fast as within a week.

The drug travels up the loop, becoming heavier as it absorbs water on the way. The heavier molecules attach themselves loosely to the vas deferens walls so they don't get dislodged—but they also don't hold on fast enough so it's easier to squeeze it out in case the couple wishes to expand their brood.

As sperms respond to the moans of pleasure, they scurry up the tube only to be ambushed by the molecular thugs. RISUG kills by messing up the electrical charge of the sperm's head, which ruptures, forcing out enzymes that help the sperm penetrate the stubborn egg-shell. By the time the emasculated sperms are finally flushed out during orgasm, they have lost their ability to break the egg's defences.

Because RISUG does not completely block the flow of sperm through the vas deferens, the negative side-effects like those associated with vasectomies are not apparent. A recent study on men treated with RISUG showed that they still had healthy prostates after eight years.

A single injection of 60 mg of RISUG can provide contraception for up to 10 years. Smaller doses provide for shorter periods. RISUG is also readily reversible. The compound can be removed by flushing the vasa deferentia with an injected solvent. In at least two human volunteers, Guha claims to have reversed the contraception.

So far, under the auspices of the All India Institute of Medical Sciences, 150 volunteers have been rendered infertile with RISUG.

For any new drug developed in India, at least 500 subjects are required for phase III human trials. However, the project coordinators are currently deliberating if RISUG may be exempted, since the drug's safety and efficacy has been amply demonstrated.

Guha has patents for RISUG in India, Bangladesh and China. The world is also taking note. Canada is thinking of conducting its own human trials, while many Americans have approached Guha to ask if they could be injected with RISUG in India. The Boston Women's Health Book Collective, the Bible of women health activists, has even rated RISUG as the most promising all-experimental male contraceptive. Research on male contraception is extremely underfunded and RISUG , if and when it is approved, will be the first commercially available male contraceptive in the world.

The supply of RISUG will be problematic though. No private company is willing to manufacture it as it is a one-time injection. The local pharma giant, Indian Drugs and Pharmaceuticals Ltd, is collaborating with Guha for a pilot RISUG manufacturing plant located in his IIT department.

It's been a long, bumpy road for Guha, with many frustrations and humiliations on the way. "Initially, everybody mocked at the idea. Even when the results turned out in my favour, rivals sought to discredit me. They even accused me of embezzling funds," he recalls with bitterness.

Guha's patience may pay off soon. But for the drug to succeed, it may take awhile and a lot of activism to break the chauvinist mould of the Indian male. If all goes well, it may even become popular abroad as India's truly maiden modern medical invention.