The BJP poll strategy is changing course. Hindutva is only a garnishing on development issues now. 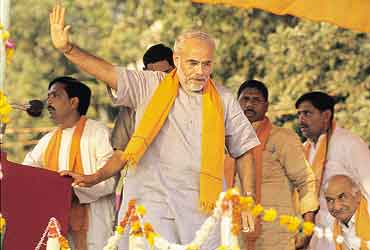 That, in fact, is the unstated message that emerges from this round of assembly polls. After the Gujarat elections less than a year ago, most political commentators had presumed that the BJP's script for future polls would read: Ram mandir, national security, isi, terrorism, jehad and minority-bashing.

Yet, in months, the Hindutva emphasis has been diluted. The VHP's failure to make temperatures soar outside Gujarat with its trishul distribution or sporadic sallies on Ayodhya perhaps led to a rethink. At the BJP headquarters, strategy slowly changed course from Hinduised national pride to issues ranged around 'development'. Says BJP general secretary Pramod Mahajan: "It is journalists and the Opposition who are obsessed with Hindutva. For us, development and good governance are the chief planks."