A War Against Eurocrats

The Gulf conflict isn't just about controlling oilfields. Bush also wants to check the Euro's steady climb over the dollar. 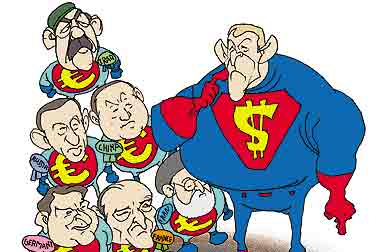 outlookindia.com
-0001-11-30T00:00:00+0553
What's this US-Iraq war all about? Many readers will think of it as a dumb question. Obviously, it's about oil: the US wants to control the world's second-largest oil reserves. Of course, it's about strategic concerns in West Asia: the US wants to reduce its dependence on its current ally, Saudi Arabia, which has become the ideological base for anti-US terrorist outfits. Finally, President George W. Bush wants to send a strong military message to a few nations that support, aid or provide refuge to global terrorist groups.

Well, think again. For, apart from the strategic impact, Gulf War II can have an enormous influence on the ongoing battle for supremacy between the dollar and the Euro. Thus, an underlying, obtuse, but probable intent behind Bush's attack may be to maintain the domination of the US currency on the global economy. A biased, but logical, article on the Net states that this war will ensure that "dollar remains the premier world trading currency", and make sure that the Euro is hurled "back into the economic sea".

Sounds a bit far-fetched, doesn't it? Currency traders whom Outlook spoke to felt the same way. Laughs Ravi Pai, head (foreign exchange & derivatives), hdfc Bank: "You can't be suggesting that Bush went to war for this reason. Any domination of a currency can only be gauged over a 10-15-year period (and the Euro was born just over four years ago)." Adds Shafali Sachdev, director (research & advisory), Credence Analytics: "It'll be difficult for the Euro to challenge the dollar for a long time to come."

But forex experts admit the outcome of Iraq war will influence the dollar-Euro tussle. To understand why and how, let's take a few lessons in economics. Without doubt, the dollar is the most powerful currency. After all, half of global exports, two-thirds of all official foreign exchange reserves held by governments, and four-fifths of all forex transactions are denominated in this currency. By default, nations that earn dollars have to invest a substantial chunk of their reserves in US assets like its treasury bonds, stock markets and real estate.

This huge capital inflow allows the US to finance its yawning current account deficit, that is, the negative balance since the country imports much more than it exports. It also allows the US to run up huge foreign debt without any perceptible impact on its economy. Since other nations' wealth is tied up with dollar assets, it forces them to stick with the currency and not do things that can devalue it.

For over 50 years, the dollar has grown from strength to strength. Then, on January 1, 1999, was born the Euro. Now, here was a currency that could upstage the greenback as the currency of choice in international trade. But its march towards supremacy was impaired due to huge volatility in its value. While the Euro opened at $1.2, within months it had slumped to 83 cents.

However, as the US economy began to slow down towards mid-2000, the Euro began to gain ground against the dollar. As share prices plunged in the US, global investors got edgy about mounting losses. For instance, investors from the Gulf Cooperation Council nations lost over $800 billion in the stock plunge. The gains for the Euro accelerated in 2001 as investors sold US assets and reinvested them in Europe, which seemed to be better shielded from a recession.

The Euro, which has climbed nearly 20 per cent over the past year or so, received an unintentional boost from 9/11, which created panic amongst Arab investors, who invest nearly $1.5 trillion in the US each year. Late last year, there were reports that some Saudi investors had pulled out over $100 billion from the US due to concerns over the safety of their funds.

Now look at the opportunity the Euro provided to nations that are politically and ideologically inclined against the US.If they decided to switch their exports and reserves to Euro, they could hit back at the American economy. The logic is that the switch would entail huge sale of dollars, and dollar-denominated assets, thereby devaluing the currency. It would also imply less demand for dollars since these nations would ask buyers of their goods to pay in Euros. If such actions got the support of the neutral nations, it could result in mayhem in the currency markets.

It was Iraq that showed the way. On November 6, 2000, it told the United Nations that all its earnings through the UN food-for-oil programme should be denominated in Euros. Later, it also swapped its $10-billion existing reserves deposited in the New York branch of bnp Paribas. By February 2003, Iraq's deposits in that account had bloated to Euro 26 billion. Other countries followed suit, and the shift became faster once the Euro began its climb against the dollar.

Iran converted half of its assets in forex reserve fund from dollars to Euros. North Korea stated it'll soon shift to Euro. The share of Euro has doubled to 20 per cent in the case of Russia's reserves ($48 billion ). Robert Rennie, a currency strategist with Westpac, feels the north-east Asian economies (China, Taiwan, Hong Kong and South Korea), which funded over a fifth of the US current account deficit in 2001, became net sellers or minimal purchasers of dollars by mid-2002. (This was also dictated by the rising Euro and the falling dollar.)

It's in this context that oil geopolitics can play a role in undermining the dollar. What if most oil producers decide to take payments in Euros as opposed to dollars that account for almost 100 per cent of global sales (except by Iraq) of over $1 trillion a year? What if petro-dollars are replaced by petro-Euros? "If such a wholesale switch does happen, it could blow a hole in the dollar, which could plunge by over 30 per cent in value almost overnight," remarks a currency trader with a French bank.

So, what Iraq and Iran, the second largest producer among the 11 OPEC members, who account for a third of global supplies, have done has created a scare. Venezuela, another OPEC member, hasn't switched to Euro but has inked barter deals with 13 countries (including Cuba) to sell its oil. In fact, there's been a move within OPEC to opt for Euro.

A senior Iranian diplomat, Javad Yarjani, while talking at a seminar on 'The International Role of Euro' in Spain last year, said it was "quite possible that as bilateral trade increases between the Middle East and the European Union, it could be feasible to price oil in Euros." Already, Eurozone accounts for nearly half of all merchandise imports from OPEC countries. If OPEC shifts to Euro, it will be a shock for the dollar. As Youssef Ibrahim of the US Council on Foreign Relations told an international news channel: "If Saudi Arabia (the largest OPEC producer) goes along with rest of the OPEC in demanding that oil be priced in Euros, that would deal a very heavy blow to the American economy."

That's why the US attack on Iraq assumes significance. Once Bush gains control over Iraq's oilfields, he can pressure OPEC to fall in line. He can then send signals to unfriendly nations—including oil producers like Russia and importers like China—to stick with the dollar. The US can also play the stick-and-carrot game with Saudi Arabia, whose switch is critical in this currency war. Euro-supporters like France and Germany would hate to see that happening and might have, therefore, taken an anti-US stance on the Iraq issue.

As usual, there's a flip side to Bush's logic. Joseph Quinlan, economist with Washington's John Hopkins University, said, "Today, if you have the US acting (in Iraq) against world opinion, there could be an even faster pullback out of dollar-denominated assets." Adds a Paris-based oil strategist, "It makes sense for any central banker to hedge his foreign currency exposures. So, we'll see a shift where countries move some of their trade to Euro." The Iraq war is perhaps the dollar's toughest-ever test.