Advertisement
Home National
What It Means For The Valley 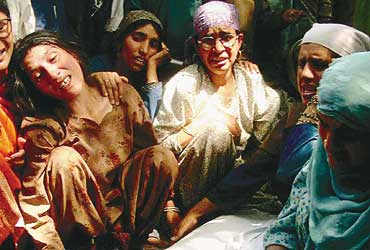 The politics aside, the average Kashmiri believes a US role is crucial for any possible solution to the Kashmir problem. For the past decade, many in the Valley have viewed America as a friend and mediator who could get Pakistan and India to sit across the negotiating table and resolve their differences. Many separatist leaders have over the years advocated US involvement in any peace process. After the failure of the Agra summit, hopes had been pinned on the meeting between A.B. Vajpayee and Pervez Musharraf in New York. Tuesday's terrorist attacks have put paid to these hopes.

The nature of attacks has fuelled fears of another kind. The belief is that suicide attacks in New York and Washington may embolden foreign militants active in Jammu and Kashmir. They have been terrorising the state through fidayeen (suicide) attacks for two years; now they might step up their activities. Says a senior political analyst in Srinagar: "What happened in the US will provide a boost to the guerrillas here. I foresee more fidayeen attacks. It may not be like what we saw in the US, but far deadlier than what we have been witnessing here in the recent past." Suicide squads have been regularly striking army and bsf targets. With the US now likely to pressurise Pakistan into cutting support to the militants, it could push them into acts of desperation in the Valley. Says a senior army official: "One man prepared to lay down his life can be more destructive than 10 others fighting in a more conventional manner."