Eye of the storm: a pilgrim centre that has ruefully seen its leanest decade go by 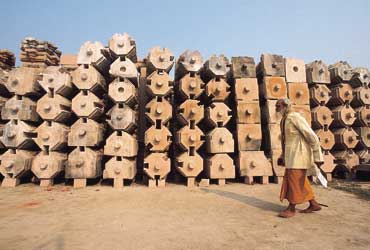 outlookindia.com
-0001-11-30T00:00:00+0553
In a town devoted to Lord Ram, monkeys are worshipped as incarnations of the faithful Hanuman. That is why people in Ayodhya are as concerned about the condition of the primate population as the human one. And everyone in Ayodhya now complains that since December 6, 1992, "the monkeys of Lord Ram have been dying of starvation". For centuries the entire township of Ayodhya—and its primate population—survived solely on the donations of pilgrims. But ever since Ayodhya became the vortex of the VHP's Ram temple movement, the city has been largely abandoned by peace-loving visitors.

The bathing ghats, the maze of narrow streets lined with shops selling religious paraphernalia and most of the nearly 6,000 historic and ancient temples that give Ayodhya its character are deserted. A big change from the pre-December 6, 1992, days when on any given day about 30,000 people would visit the town. "The only occasions we see a crowd is when frenzied kar sevaks storm the town during programmes organised by VHP," says Kalawati Mishra, who sells Ram idols at Hanuman Garhi, the main temple at Ayodhya. "And their arrival ensures there will be no business," she adds sarcastically.

Kalawati is one of the local residents who had once whole-heartedly supported the movement to build the Ram mandir in Ayodhya. But like many other locals, she has become disillusioned over the years. "The VHP used us. They politicised the Ram temple and now I doubt if it ever will be built," says Shripal, a resident of the Tulsiwadi area. Pan shop owner Jai Shankar echoes this lingering resentment: "Gradually, people are realising that only the VHP and BJP gained from the Ram temple. The people and Lord Ram are the real victims."

In Ayodhya today, the VHP is a hugely discredited organisation. Many call it corrupt. Some of the phrases used for the VHP by Ayodhya residents are "fund-guzzlers", "politicians masquerading as religious leaders" and even a "congregation of usurpers". Shakuntala Gupta's husband was one of the kar sevaks who was killed in police firing in October 1990 during a VHP programme to hoist saffron flags over the masjid. But even she is cynical about the movement today. "Lord Ram is watching everybody. He is also watching those who are playing politics using his name," says Shakuntala, who has been struggling to raise her four children.

A stone's throw from her residence, Mahant Ramchandra Paramhans Das in his Digambar Akhara nonchalantly produces crisp currency notes to order sweets and snacks for visitors. The Ram temple movement has showered prosperity on the likes of Paramhans, head of the Ram Janmabhoomi Nyas. Relaxing in the comfort of his 'Z' security ring and surrounded by his confidants, the eloquent sadhu talks in idioms and phrases to refute all charges against his akhara and the VHP. "Some real and some fake sadhus are suspecting our intentions," he says.

Mahant Gyan Das of the Nirvani Akhara does more than that. "That boodha goonda (old rascal, referring to Paramhans) and VHP devils like (Praveen) Togadia and (Ashok) Singhal have ruined the temple cause. As long as they are there, the temple will never be built," he says. His views are supported by another mahant, Jagannath Das of the Nirmohi Akhara, the original party to the title suit over the disputed land. "Nobody has any record of the crores of rupees collected on behalf of the mandir. The VHP and Paramhans have cheated the Hindu population," he alleges.

The two akharas have considerable clout in Ayodhya. They control 16 of the 18 sub-akharas while Paramhans' Digambar Akhara has only two under its control. They feel even more bereft when "crores are going to the VHP and Paramhans". Says Gyan Das, "The PM talks to the VHP and it has acquired the role of prime arbiter over Ram Janmabhoomi when it is not even a party in the legal battle."

The decline in the number of pilgrims has also affected the cash-flow at many of the temples the akharas manage. That's why Ayodhya's now familiar with the choicest expletives being hurled by warring akharas against each other at religious ceremonies and functions. Once the centre for religious learning, the akharas of Ayodhya today resonate with tales ranging from wild allegations of the sexual peccadillos of VHP leaders to a mahant who supposedly died of aids. "The VHP lot are a stigma on Hinduism. Paramhans can be found playing cards the whole night," says Gyan Das.

Ayodhya's residents who earn a living through pilgrims are more concerned about their livelihood. "Now pilgrims are hard to find and people have been rendered jobless. Only the VHP's coffers are getting filled by donations," says a disillusioned Vipin Kumar Verma, a painter residing in Ram Ghat.

But Paramhans couldn't care less about such complaints. He waxes eloquent on his plans for constructing the mandir. His akhara along with VHP cadres is also preparing to celebrate December 6 this year as 'Vijay Diwas'—an annual ritual since the demolition.

That is the day Ameena Khatun and Shaheeda Begum of Alam Ganj Katra mohalla mourn their two relatives, both burnt alive by a frenzied mob of kar sevaks 10 years ago. "Every time the VHP organises some event, we go into hiding. On December 6, we run for shelter in safe households," says Ameena. "We want our masjid back even if it costs our lives," they both say. Their rage is not surprising. Given that they live in abject poverty and an environment permeated by communal hatred, perhaps the only thing they can bargain with is their lives.

But contesting 'champions' of Islam and Hinduism have a never-ending list of plans. Eighty-two-year-old Mohammed Hashim Ansari, who is fighting the title suit on behalf of UP's Sunni Waqf Board, is determined to rebuild the masjid. His organisation, the Babri Masjid Reconstruction Committee, will observe a 'black day' on December 6. "We want to find out if democracy survives in this country," he says. R.C. Singh, head of the department of sociology at Ayodhya's kpss Post Graduate College, says, "The atmosphere has been irreparably vitiated to such an extent that there is hardly room left for communal harmony."

Evidently, Wali Ullah, a 62-year-old tailor from Dorahi Kuan mohalla, tried and was shunned within his community. After the demolition, kar sevaks had torched his shop but in the name of communal harmony he chose not to register a case. "I was slapped with three fatwas of being mad, a Hindu and a kafir by muslim clerics when I filed an affidavit in the court that no innocent should be punished for torching my shop and house as I was not an eyewitness to the incident," he says. Wali, however, believes that the VHP has forever broken the trust between Hindus and Muslims locally, and even more dangerously, nationally.

Though the VHP is not repentant of what happened on December 6, the local residents are. "We regret that due to us the whole nation suffers. We are hurt when we hear about incidents like Godhra and the riots that followed. Nobody from Ayodhya ever desired that," says Ram Jatan Sahni, who witnessed the demolition.

In this holy town full of communal discord, land disputes, warring akharas and abusive mahants, it is hard to arrive at a consensus on any issue. But for the local population, there is no dispute over the fact that Ayodhya has gained very little from the demolition and is now a forgotten symbol of the BJP's Hindutva movement. As Shakuntala Gupta puts it, "We trust Lord Ram. But we have lost faith in those who head the Ram mandir movement."