A Touch Of Raw Flesh 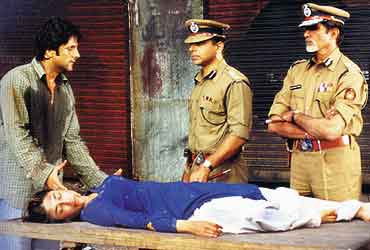 The parallels with recent history are hard to miss. A young Muslim boy who nurses wounds of indignity and itches to take revenge on a Hindu policeman. A compromising top cop who links his future to an ideologically aligned chief minister. A bomb blast near a Ganesha temple; RDX packed into a motorbike by young Muslims and the ensuing riots after the blast. A CM who says people’s anger must be allowed an outlet (so blatantly Gujarat 2002). His lackey roams the burning city in an open jeep, directing his boys to plunder, rape, burn. People in power preventing FIRs being filed, the top cop sitting in the CM’s office directing his officers to stand by while people and property burn. A brave girl who eventually stands up to be counted and helps the cause of justice.

The only element with no real-life parallel is Dev (played by Bachchan) himself, a senior policeman who does act when his city burns. He keeps his devoutness outside his uniform, takes a near-Gandhian view of Hindu-Muslim relations, and pays for it with his life. Dev is fictional, representative of how the police force ought to be—upright, immune to corruption of lucre or ideology, sensitive to the human beings behind the statistics and stereotypes, seeking to dispense justice.