A Time To Lock-In

Even as the economy is looking upwards, many swear by sedate government policies 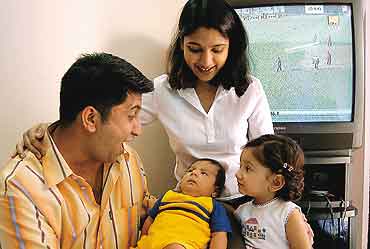 outlookindia.com
-0001-11-30T00:00:00+05:53
For nearly five years now, returns from government small savings schemes have been falling in line with the general trend in interest rates. For instance, the interest rate on the public provident fund (PPF), the tax-saving lifeline of the salaried, has shrunk from 12 per cent in January 1999 to 8 per cent currently. Yet, these tried-and-trusted savings options of middle-class Indians continue to find more and more takers every year, growing in appeal to attract people in higher-income groups also.

Safety and returns. Today, when the stockmarket is on a roll, gold prices are touching new highs, real estate prices are finally beginning to crawl up, individuals still swear by these sedate government schemes. One such faithful is Vishal Athwani, 28, married with two kids. This Mumbai-based businessman embraced small savings schemes four years ago, and makes it a point to invest around Rs 75,000 every year in Kisan Vikas Patra (KVP) and National Savings Certificate (NSC) towards his children's future. His loyalty stems from the government tag these instruments carry, promising the highest degree of safety. The uncertainty of stocks or mutual funds, or even corporate deposits is not his cup of tea. Explains Athwani: "I don't want to take any risks, and small savings schemes are the best risk-free investment around." It's because of people like Athwani that Rs 53,889 crore found its way into such schemes during April to August 2003, a jump of 27.4 per cent.

Safety remains a big theme with the average small savings investor. But, strangely, as investment logic demands, this absolute safety hasn't come at the expense of returns. While it's true that returns from small savings schemes have been falling, they still beat hollow most fixed-income instruments in the market, be it government or corporate, risk-free or risky, taxable or non-taxable. Small savings schemes offer an annual return of 6.5-8.5 per cent, all risk-free and some even tax-free (see table). By comparison, bank deposits of similar tenures offer 6 per cent, government securities and corporate debentures 6-7 per cent. Some corporate deposits and bonds do offer 9-10 per cent, but the risk of principal default in them is fairly high.

The only limitation of small savings schemes is liquidity—most have a lock-in or a prohibitive premature withdrawal penalty. But if you are willing to set aside your money for at least five years, small savings schemes are the best option in the debt space. Says Kanu Doshi, chartered accountant: "These are worth investing in, as they meet the basic principle of diversification without compromising on safety or returns." Adds Anil Mhatre of Disha Finance, a distributor of financial products: "More and more professionals like doctors and higher middle-class businessmen don't mind blocking funds. Even youngsters have taken a fancy to small savings."

Going down? The marked superiority of small savings schemes over other debt instruments is an aberration. Why should a zero-risk instrument offer the highest returns among debt instruments? Yet, it's been happening, and continues to happen, simply because the government doesn't want to antagonise key constituencies of voters, especially in an election year. After five small rate cuts over the past five years, finance minister Jaswant Singh didn't axe small savings rates in his mini-budget last month.

Good economics does point to a cut, of 1-2 percentage points. A 10-year government security (G-sec) currently offers an annual yield of 5. 3 per cent. A comparable small savings scheme, the KVP, which has a tenure of eight years and seven months, fetches 8.4 per cent. That's a difference of 2.7 percentage points in return. In theory, either of the two things should happen: the G-sec return should rise or the KVP return should fall.Says Saumitra Chaudhuri, economic advisor, ICRA: "The interest rates on small savings is higher than market rates. But this difference should narrow over a period of time." It's unlikely to happen in the coming months. Most experts say interest rates have bottomed out. In fact, in the short term, given the strong inflationary pressures, rates might even creep up marginally. The status quo should remain till the new government settles in.

Sooner or later, though, rates on small savings schemes will have to be aligned to the rest of the market. Policymakers are in broad agreement, it's the political will that's missing. Eventually, economics will force some sense of urgency. The exchequer is incurring a huge cost to finance these schemes. In order to bankroll these schemes, the government has to invest this money and earn more than what it pays out, something it's failing miserably to do as of now. It might be left with no option but to reduce its obligation by snipping rates on small saving schemes (to start with, to 7 per cent) and by calibrating their returns to the market, as recommended by successive government panels set up to look into the issue. Some experts say this might happen as early as in a year's time.

Make the best of it. That's all the more reason why, if you have money to stack away and prefer the conservative profile of debt, you should be looking to lock in to these safe and high-yielding instruments. The tax breaks some of them offer (Section 88 rebate, Section 80L deduction and tax-free income) add pop to your returns. Consider the popular Government of India 6.5 per cent tax-free bonds. As the interest on these bonds is tax-free, an investor in the highest 30 per cent tax bracket will earn a pre-tax yield of 9.25 per cent. This is a risk-free return and higher than the 7 per cent top-safety corporate debt offers.

One of the most popular small savings scheme is the post office monthly income plan, which has a tenure of six years and offers 8 per cent monthly interest plus a 10 per cent bonus on maturity. Throw in the tax-benefits under Section 80L, and the effective pre-tax returns for an investor in the 30 per cent tax bracket rises to 11.6 per cent. Further, if the investor doesn't want monthly income and instead reinvests it in the five-year post office recurring deposit scheme, his effective pre-tax return rises to 13.8 per cent. Says Mhatre: "More and more investors are getting attracted to the combination of the monthly income plan and the recurring deposit scheme." In addition, schemes like PPF and NSC offer a tax rebate under Section 88. By investing in these schemes, within limits, investors with a total annual income of up to Rs 5 lakh can reduce their tax liability by 15-30 per cent of the invested amount. Enjoy the party while it lasts.