A Thumbs Up From London

Outlook sent bottles of Coke and Pepsi to Britain's largest laboratory to test for pesticides. The result: a clean chit for the colas. 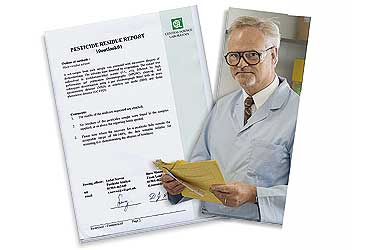 outlookindia.com
-0001-11-30T00:00:00+0553
Last fortnight, as allegations and counter-allegations about the presence of pesticides in our soft drinks flew thick and fast, as test result after contradictory test result made the headlines, Outlook decided to conduct its own investigation. We bought two bottles each of Coke and Pepsi from Bengal Sweet House in the Safdarjung Enclave market next to Outlook’s headquarters in Delhi, and shipped them to the Central Science Laboratory in London.
We asked CSL to test the samples for 35 pesticides, including organophosphates and organochlorines, the chemicals that the CSE and the Indian government tested for. The samples were tested for traces of pesticides to a level of one part in 10 billion. In order to demonstrate that the test can detect traces at these low levels, a separate control sample—a sub-sample of a cola drink known to be free from pesticide contamination—was ‘spiked’ with the pesticides to levels of one part in 10 billion. The control sample was then tested to make sure that the tests used could detect traces of pesticides down to that level. The testing of the control sample is intended to show that the CSL’s tests can find what the scientist put in. This implies that if any residues of pesticides existed in the test samples, the instruments used would have been able to see them.

The same test was applied to the samples sent by Outlook for testing.

The testing itself involved concentration of the sample by a factor of 250, and then a chromatographic procedure was used to remove ingredients like caffeine and sugar, in both the control sample and the test sample. The "cleaned up" extracts were then analysed using Gas Chromatographic (GC) systems coupled to instruments like the mass spectrometer, which detect and identify the pesticides tested.

Now the findings. Of the 35 pesticides sought, including those named in the Indian reports, no traces were found of 31 at or above the one-per-10-billion level, which is also the EU norm for individual pesticides in beverages. For the other four, no traces were found at or above the two-per-10-billion level, so there is a possibility that they could exist in the samples above EU-mandated levels. But none of these four chemicals were probed for in the Indian tests.

In other words, a clean chit.

We were surprised. We rechecked with Sadat Nawaz, pesticide analyst, CSL, and Dave Mason, team leader for the tests. "A test can go only as far as its limits of sensitivity," Nawaz told us. "If any trace residues do exist, they theoretically could exist at levels well below one part in 10 billion. You can never say there is nothing there, you can only go down to the lowest levels possible, i.e. the reporting limit achieved for the methods used."

OK. The next question that struck us was: EU norms for total pesticides present in beverages is five per ten billion. So was it possible that even though hardly any individual pesticide was more than one in ten billion, they could all add up to more than five per 10 billion?

Said Nawaz: "Theoretically a small possibility remains that there may have been trace levels of all 35 pesticides tested at levels well below 0.1 ppb and the sum of these may have exceeded the 0.5 ppb level. But having studied the chromatographs carefully, I am confident that the probability of this occurrence is extremely low."

We then compared CSL’s test results with the results of the CSE’s and the government’s tests. What struck us immediately was that while CSL had stopped at one part in 10 billion (microgramme level), the Indian laboratories had tested the soft drink samples at a sensitivity level of one part in ten thousand billion (nanogramme)!

How was this possible? We asked CSE. Said Chandra Bhushan, coordinator, CSE’s industry and pollution unit: "We in our country measure pesticides up to the nanogramme level." CSE also claimed the equipment used by the London lab was inferior to the equipment CSE used in India.

However, Bhushan also offered some possible reasons for the dramatic deviation between the CSE’s, the government’s and Outlook’s test results. "In the course of running several groundwater projects, CSE has found that rainfall creates a dilution in pollutants between 20-50 times," he said. "We had collected our cola samples in January, when it was relatively dry. The samples collected by the government as well as Outlook were in August, after a very wet spell in Delhi. It is possible that the difference could have occurred on that account. Also, sensitivity of equipment differs from lab to lab. And old samples tend to show up a greater degree of pesticides, as some pesticides break up (technically called synchronisation effect) over a period of time." Dr S.P. Vasi Reddy, MD of the vimta lab in Hyderabad, too confirmed that rains could play an important part in diluting toxins.

Ravi Agarwal, head of Toxics Link, a non-profit organisation which has tested pesticide levels in food in the past, though, had a different take: "Such deviation is entirely possible, the calibration experience of laboratories in India are horrendous." We went back to CSL, London. "Concerning the higher-sensitivity reporting limits, it is possible but without looking at the method details, it would be unfair for me to comment," said Nawaz. "But my view is that I would be surprised if such reporting limits are achieved in a complex matrix like soft drinks."

So what did the results of the tests done at Britain’s biggest, most prestigious laboratory at Outlook’s behest prove, finally?


So is it regional variation? Or seasonal? Or wrong methodology, or poor calibration? The report we got from CSL clearly and unequivocally states: "No residues of the pesticides sought were found in the samples supplied, at or above the reporting limits quoted."

By Sanjay Suri in London and Sanghamitra Chakraborty in Delhi