Both Mahakootami and PRP fail to fuel anti-incumbency 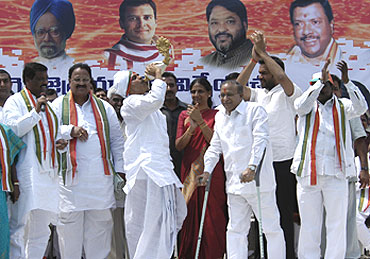 At least since the 1980s, Andhra Pradesh had settled into a two-cornered political universe, with the Congress and the TDP occupying all of it. Naxalism on the outside was certainly a bigger factor than the stray pockets of mainstream Left influence within the system. The game, however, has been changing in recent years. The arrival of the Telangana Rashtra Samiti (TRS) was the first sign of a deeper segmentation. If that had a regional logic, the appeal of Chiranjeevi’s new Praja Rajyam Party (PRP), with caste affiliation at its basis, completes the break-up. The present assembly and Lok Sabha elections, thus, are multi-cornered in an unprecedented way—no one knows exactly how the contest between the Congress; the grand alliance or Mahakootami led by the Telugu Desam Party, with the TRS, CPI and CPI(M) as junior partners; and the PRP will pan out.

If the Congress manages to make a serious play of its intent to retain power in the assembly and contribute significant numbers to the Lok Sabha, like it did in 2004, this election will be a do-or-die battle for the TDP and the TRS. The PRP too will be full of anxiety about holding on to the initial surge of support if it wants to remain relevant after the elections.