A Test In Revised History 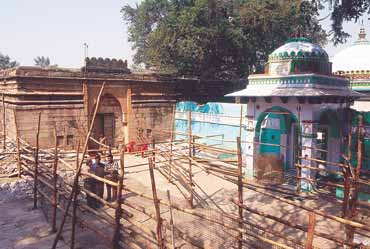 outlookindia.com
-0001-11-30T00:00:00+0553
A thousand kilometres as the crow flies from Ayodhya, in the sleepy town of Dhar near Indore, communal tensions are building up over another disputed site. An ancient stone monument, the Bhojshala, is threatening to become the next flashpoint between Hindus and Muslims, as self-styled dharam rakshaks (protectors of the faith) whip up public sentiment.

With vhp leader Praveen Togadia taking up cudgels on behalf of the Hindu Jagaran Manch (HJM)—an umbrella organisation of Sangh activists—political leaders including Madhya Pradesh chief minister Digvijay Singh and his chief rival Uma Bharati have been forced to take urgent cognisance of the dispute, which could well snowball into an election issue.

Although both communities lay claim to the disputed site, a protected monument, historical records say it was strictly speaking neither a temple, nor a mosque. It was a school, constructed in the 11th century under the rule of that renowned patron of culture and learning, Raja Bhoj. Sitting cheek-by-jowl with the Bhojshala is the dargah of a Sufi saint, Kamaal Maulana Chishti, constructed in the 16th century after Muslim invaders partially destroyed the Bhojshala. And therein lies the source of the dispute.

The Bhojshala is fashioned as modern schools are, with a verandah on four sides enclosing a courtyard, in the centre of which sits a stone platform, presumably where classes were held. For decades, Muslims have offered namaaz in this courtyard, permission for which was obtained in the early 20th century from Dewan Nadkar, then ruler of the erstwhile princely state of Dhar. For hundreds of years, Hindus too have congregated in the same courtyard on Basant Panchami to honour Saraswati, the goddess of learning, whose idol once supposedly graced the Bhojshala. As they did last fortnight, on February 6.

But this year the mood was different. The annual pilgrimage, coming in the wake of an year-long satyagraha by Sangh parivar activists for the "liberation" of the Bhojshala, became a militant show of strength. Dubbed a dharam rakshak sangam, it was used as a platform by the HJM to articulate its claim over the Bhojshala and threaten a forcible entry on February 18. Dharam rakshak samitis were set up in surrounding villages by HJM activists, who cajoled the denizens of Dhar to turn out in their thousands for the Saraswati puja at the Bhojshala and Togadia's public meeting in an adjoining maidan. The HJM claims an attendance of one lakh; the district administration put it at 22,000 and press reports say the truth lies somewhere in between.

Togadia threatened "Ayodhya-like consequences" if the Hindu claim on the Bhojshala was not honoured. The bjp leaders, prominent among them Uma Bharati and Union minister Vikram Verma, who visited the Bhojshala subsequently, took a more moderate line. Nonetheless, they expressed support for the HJM's demand that the Bhojshala be open to the public throughout the year, instead of just once a week for Muslims and once a year for Hindus. Bharati—who was not permitted to enter the Bhojshala—is believed to have written a letter to Union minister for tourism and culture Jagmohan, urging him to open the Bhojshala to devotees. "The ASI had closed the Bhojshala to the devotees at the request of the state government. They should be permitted daily darshan." If Jagmohan refers the request to Digvijay Singh, the latter could be in a tight spot.

Heavy wooden barricades, reminiscent of those around the disputed site in Ayodhya, protect the Bhojshala from visitors. Through the main doors, one can just about get a glimpse of a shrine, richly embellished with stone carvings, which bisects the opposite verandah. The shrine is empty, but the HJM claims it once held a Saraswati idol. Pujas dedicated to the goddess and attended by both Hindu and Muslim students, were held on Tuesdays.This was standard practice in most centres of learning in the Malwa region of west-central Madhya Pradesh.

The HJM claims that Lord Curzon, governor-general of India, appropriated the idol while on a tour of Malwa. It now stands, or to quote the HJM, "is held captive" in the London Museum. Ram Swaroop Garg, former deputy director, department of archaeology, says there's no evidence directly linking the Bhojshala with the idol. However, there's circumstantial evidence, as an idol was found during the renovation of the Rajbara near the Bhojshala. Either way, the HJM wants it back and insists the external affairs minister should take up the matter with the UK government.

Dhar has been communally sensitive for nearly a century, thanks to the Bhojshala. In 1935, the Hindus of Dhar objected to the Friday namaaz but the claim of the Muslims was upheld on the basis of Dewan Nadkar's permission. In 1944, full-fledged riots broke out over the issue and curfew had to be declared. Thereafter, the annual Urs festival, featuring a five-day cultural programme and a chhadar juloos, was attended by communal tension. Several incidents of stone-pelting were reported. In 1984, the tension erupted into rioting once again and the police resorted to firing to quell the mobs.

In 1952, the year a government-sponsored Bhoj festival was held, with cultural programmes and religious discourses, the monument was taken over by the Archaeological Survey of India (ASI). Although worship is usually not permitted in an ASI-protected monument, the Bhojshala is an exception. Off and on, both communities have attempted to establish a legal claim on the premises but the cases have either been withdrawn or dismissed. In the course of the petitions, the central and state government have both submitted affidavits clarifying that an ancient school stood on the site.

"The Babri Masjid demolition was something of a turning point. After that, Sangh activists began holding shaurya diwas meetings and reciting the Hanuman Chalisa at the Bhojshala," says district magistrate Sanjay Dubey. In 1995, a serious attempt was made to sort out the issue. The Hindu community was given permission to hold a puja at the Bhojshala every Tuesday, while the Muslims continued using the courtyard for their Friday prayers. But the issue refused to die down and in 1997, matters came to a head.

The then DM, B.R. Subramaniam, tried to adjudicate and wound up declaring the monument a restricted area. He then wrote to the central government and the ASI director, asking them to endorse the ban, as he couldn't ensure the safety of the premises. The then ASI director, Ajai Shankar, obliged on February 5, 1998, with an order banning visitors except between 1 pm to 3 pm on Fridays for namaaz and on Basant Panchami for puja. Subramaniam also evacuated a room inside the Bhojshala used by the Muslims to stack prayer mats and closed the graveyard adjoining the monument.

The HJM's main demand is that the pre-1998 status, when anyone could go into the Bhojshala and Saraswati puja was offered every Tuesday, be restored. Says Dinesh Deoria, HJM and Dharam Rakshak Sangam activist: "If our demand is not accepted, our year-long satyagraha will be converted into an andolan. We will force our way into the shrine. The muhurat is at 12.39 precisely. At the same time, maha-aartis will be held all over the district." Eventually, they would also like the Bhojshala's original status as a centre of learning to be restored.

While the HJM claims the dargah has been gradually encroaching on the land around the Bhojshala in an attempt to encircle it, Dubey says there does not appear to have been any change since 1970. The other charge levelled by the HJM is that the monument is being gradually defaced by the Muslims who pray there every Friday.

Dhar boasts yet another disputed site, termed Vijay Mandir by Hindus and Laat Masjid by the Muslims. The Muslims congregate there twice a year on Id and the Hindus once a year on Dussehra. This has yet to become an issue, with the HJM concentrating its energies on the Bhojshala.

The state government and the district administration are trying to downplay the Bhojshala issue but local denizens feel it is a losing battle. Locals say the district administration made every attempt to turn the Basant Panchami rally into a damp squib, using a carrot-and-stick policy—seizing vehicles, putting blockades on roads, freely using police pressure and even organising grievance redressal camps in villages. These tactics didn't manage to keep devotees away, but the puja and rally passed off peacefully. The following week, Id also proved peaceful, with local leader Mujeeb Qureshi appealing to Muslims not to go to the dargah for namaaz. He insisted this did not imply they had relinquished their claim to Friday prayers at the Bhojshala.

The local population tends to agree that the Bhojshala should be open to the public as other ASI sites are. On the other hand, it sees the HJM campaign as being election-related. And it's likely to snowball, despite Digvijay's sternly-worded warning last week to "all those spreading communal discord". If he accedes to Bharati's request to reopen the Bhojshala, the HJM, it is feared, may up the ante even further, creating—as Togadia threatened—an "Ayodhya-like" situation.