The government has belatedly woken up to the crisis. But timely measures could have averted the shortage. 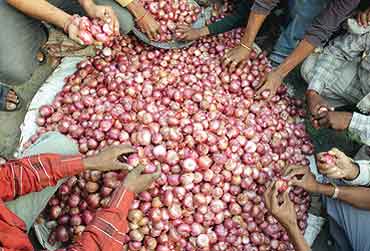 outlookindia.com
-0001-11-30T00:00:00+05:53
It's festive season, no compromise on shopping. But a vegetable—consumed everyday by most households—is bringing tears to their eyes. In fact, several people like Suryakant Sawant, a retired Mumbaikar, have stopped buying onions for weeks. The last time Sawant checked, onions were selling at Rs 30 per kg or nearly three times the price in July '05. So, he came back empty-handed and scrounged around for the few remaining ones at home. "So far, we've managed to do without fresh buying but we may need to buy some before Diwali," he says mournfully.

Across the country, from Calcutta to Mumbai, Delhi to Chennai, buyers are complaining about the high prices, bad quality and even a shortage of onions. The unabated, one-way price movement also led to protests. The backlash forced both the central and the state politicians and bureaucrats to sit up and initiate speedy action. For a good reason too.

In the recent past, onions have proved to be India's most politically sensitive crop. In 1998, a similar increase in its retail price led to the defeat of the BJP in four state elections—Himachal Pradesh, Madhya Pradesh, Delhi and Rajasthan. At that time, unseasonal monsoons and large-scale hoarding contributed to a shortage and retail prices shot up to

Rs 50 per kg. The ruling BJP regime at the Centre was accused of acting too late and the Congress took advantage of the ire among consumers by making it an issue in the subsequent assembly elections.

With that precedent looming large, the current hike jolted the policymakers. Briefings were held on a daily basis and politicians were tracking onion prices as closely as day traders monitor stock movements. Within a few days, the UPA government decided to import over 3,000 tonnes from Pakistan and China which will reach the domestic retail mart this week.

Other administrators have also got into the act. The Delhi state government has set up special retail outlets to sell them at cheaper prices. The Maharashta state government has decided to waive the marketing cess of one per cent that's levied on onions, has requested the Centre to provide subsidies on the imported product, and has asked all state-level market committees to remain open during the six-day Diwali holidays to facilitate open trade in onions. The policymakers are hoping that these decisions will earn them brownie points and help ward off the negative effect of the onions crisis. After all, no one wants to take a chance with India's most emotive commodity.

A mix of bad fortunes and myopic policy decisions led to a supply shortfall and, therefore, a huge increase in wholesale and retail prices. This year's torrential rains and subsequent June-July floods in the onion heartland—Gujarat and Maharashtra, which together account for half the annual crop—delayed the sowing season in some areas and spoilt the crop that had already been planted in other regions. Obviously, there was a huge production loss from this crop which would have normally reached the wholesale market in August or September.

Apart from this, 15-20 per cent of the previous season's produce, which was lying in storage and used to maintain supplies during the lean months of June, July and August, rotted due to the rains. State-level market committees have been warning about a supply crunch since July this year. According to them, the combined seasonal shortfall due to the cropping delays and rotting was around 40 per cent.

Experts firmly believe the impact could still have been cushioned with a little bit of planning. "The current crisis is a result of half-sighted liberalisation policies," says Ramesh Chand, principal scientist, National Council for Agricultural Economics and Policy Research. "While there are still quantitative restrictions on onion imports, its exports are unrestricted," he explains and adds that this led has led to an acute shortage.

Despite the signs of a shortage in August and September, exports continued—in September, 40,000 tonnes were exported. During the April-September period, India exported 3.68 lakh tonnes, compared to 5.62 lakh tonnes in the same period the previous year. (Exports were higher in '04 because of the huge glut last year.) Even in October, as domestic shortage reached its peak, exports accounted for nearly 8,000 tonnes. "This shortfall could have been predicted and adequately planned for," says G. Mythili, associate professor, Indira Gandhi Institute of Development Research. Adds Chand, "We can't match demand and supply because of our policies. The signs of a shortage were visible in July and August and we should have started imports then." And also put a stop to ongoing exports in August or September. 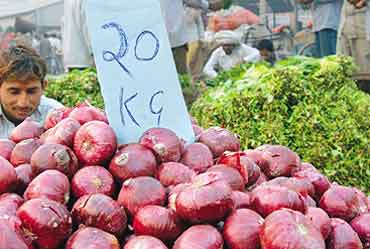 Now that imports are imminent, they may also be ill-timed. By the time they hit the retail markets, the new crop of domestic onions—from Rajasthan—will be ready. Yet another crop from Maharshtra and Gujarat will be standing by December. "This is a foolish decision and will hurt the farmers," says Vijay Jawandhia of the Shetkari Sanghatana, while talking about the decision to import onions. "If we had waited a few weeks, the next crop of onions would have come in the market," he adds. His organisation was a part of an alliance that staged a demonstration against imports in Mumbai last month.

Apart from the immediate shortages, there are macro issues that need to be addressed. Farmers contend that they tend to bear the final brunt of such situations. For example, the combination of imports and fresh domestic crop is likely to force prices down. It's the farmers who'll have to deal with these volatile fluctuations. Last year, due to a glut in production, wholesale prices fell to Rs 5 per kg (now about Rs 20) and the acreage under cultivation went down by 5-10 per cent this year. The current knee-jerk reaction among policymakers may lead to a similar situation next year. "The media makes a big deal when prices rise, but never writes about how farmers are affected when the prices fall," feels a Mumbai-based economist.

In the case of Maharashtra, which produces more than a quarter of India's onions and exports nearly three-quarters of the nation's figures, the issue is more complicated as the torrential rains have affected several crops, including onions, cotton and soybean. With a negative impact on its cash crops—which are more profitable for the farmers—the state is going through what the agriculture minister Sharad Pawar calls an agrarian crisis. "Either the minimum support prices for agricultural products are being dismantled or they are fixed at below the cost of cultivation in the case of many crops. So, agriculture has become a difficult option for most farmers," feels Ajay Dandekar, a professor at the Tata Institute of Social Sciences.

At the moment, the government is more interested in tackling the crisis. A Mumbai-based housewife who stopped buying onions three weeks ago says she has better uses for her money—watch a film or buy Diwali decorations—and use a substitute for cooking. But others for whom the onion is indispensable have been forced to shell out the extra cash.

The Poet In His Private Prison