A Taste Of Bamiyan

An 87-year old research institute is vandalised in the name of Shivaji. Priceless manuscripts are gone forever. 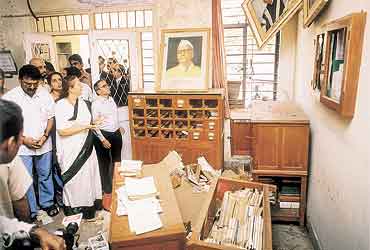 outlookindia.com
-0001-11-30T00:00:00+0553
Pune's cherished legacy of scholarship suffered a severe concussion last week: a drove of hoodlums stormed and ravaged the city's reputed Bhandarkar Oriental Research Institute. Their grouse: the institute, established in 1917 and revered globally as the nerve-centre of Indological and Orientological research, had helped American author James W. Laine in his book on Shivaji, Hindu King in Islamic India. The book, praised in academic circles, carried some brief uncharitable remarks about the parentage of the legendary 17th century Maratha ruler. A week later, even as aid pours in from far and wide to help the institute back on its feet, the city which has prided itself as the bastion of culture, knowledge and everything urbane is still finding it difficult to rebound.

The institute's only fault was that it allowed an American author—much like the countless researchers it has hosted from faraway countries—access to its hallowed collection of 1,50,000 books and 80,000 rare manuscripts. What has exacerbated the anguish of intellectuals at the mindless ransacking (estimated loss: Rs 1.25 crore) was that the author and the publisher had both tendered public apologies and withdrawn the book in November from the Indian market.

No one at the institute had anticipated an attack on January 5. The entire controversy had been put to rest after the Shiv Sena, which first raised the issue and even blackened Sanskrit scholar Dr Shrikant Bahulkar's face because he had been acknowledged by Laine in the book, accepted the author's and publisher's apology nearly two months ago. Sena leader Raj Thackeray even tendered his apologies to Bahulkar.

Yet, political opportunism once again bared its fangs. Enthused by the visibility the Sena had earlier generated for itself in the entire episode, Sambhaji Brigade (SB), the youth arm of a lesser known outfit called the Maratha Seva Sangh (MSS), decided to trot out its love for Shivaji and mobilised as many as 150 youths from Satara, Solapur, Osmanabad and Beed districts for some 'direct action'. Preliminary investigations suggest the attack was premeditated. Only a handful of the miscreants were hardcore members of the SB and even fewer had actually read Laine's book or knew what was so "objectionable" about it.

When contacted, Laine, professor at the religious studies department at Macalster College, Minnesota, told Outlook that the attack was most unfortunate. "The book has been misinterpreted and then used as a cause to instigate. Of course, the book is no longer available and no one can read it. I foolishly misread the situation in India and figured the book would receive scholarly criticism, not censorship and condemnation. I had no desire to upset those for whom Shivaji is an emblem of regional and national pride."

The Jan 5 vandalisers went about their task with a ruthlessness that left a trail of destruction of the institute's prized possessions. The remains of the day were damaged artefacts, mutilated manuscripts and inconsolable scholars. Twenty-five valuable manuscripts in Sanskrit, Pali and Ardh Magadhi were stolen. So were 11th century copper plates, spearheads, rare relics and a portrait of Shivaji acquired from a French museum. A clay tablet dating back to the Assyrian civilisation (600 BC) was completely destroyed. The SB activists also damaged a manuscript of the Mahabharata from 10 AD, palm leaf inscriptions, Vedic literature besides countless other books and manuscripts.

The footage-hungry crews of two Marathi television channels were busy filming the miscreants wreaking havoc rather than call the police. Many of the MSS members, including their leader Anand Chonde, couldn't resist the temptation of belting out statements in front of the cameras, although all they could say was that there was "something wrong" in the book.

Police say that the mastermind of the attack had visited the institute earlier to record its design and the staff's routine. On the fateful day, the miscreants, nearly 150 of them, had all assembled on the outskirts of Pune. They had been treated to a sumptuous breakfast and then ferried to the scene of the crime in jeeps. The attack was launched as soon as the support staff opened the institute's gates.

The hooligans forced their way into the building, snapped off power and telephone cables, smashed the windowpanes and broke chairs, tables, and nearly 50 cupboards brimming with books, manuscripts and research material. Eyewitnesses later told Outlook that the vandalisers insolently danced on the rare books and manuscripts. The so-called followers of Shivaji didn't even spare the numerous books on him and trampled on his portraits. The police turned up after the action was over and found a crowd waiting to court arrest. Only 72 of them could be arrested and were remanded to police custody till January 14.

Purushottam Khedekar, who founded the MSS in 1990, extolled the act as a mark of his organisation's "true love for Shivaji" and commended the detained activists as the "real followers of Shivaji". "Sooner or later, we will manage to free them," he said. Notably, Khedekar works as an executive engineer at Pune in the Public Works Department. But how could a government employee orchestrate such a deed and articulate such views unabashedly without fearing any reprimand? Khedekar, whose wife is a BJP MLA from Vidarbha, is said to be banking on his strong political connections. Several corruption charges against him in the past haven't even remotely affected his career. He was suspended once, and then reinstated, and has been touring the state to bring about "Maratha awakening".

Now, even as the Maharashtra government plans legal action against Laine alongside a ban on the Sambhaji Brigade, scholars and citizens are sceptical about the guilty getting their comeuppance. Almost all have blamed the political ambitions of the Brigade, which is increasingly speaking the language of the Shiv Sena. The Sena itself has been intriguingly quiet on the developments.

Historian Bhaskar Mehendale, who has been working on an epical 8,000-page, two-volume biography of Shivaji, the first volume of which has already been released, reproached the strong-arm tactics by destroying nearly 400 unpublished pages of his work. "A competition seems to be on to prove who loves Shivaji more," he lamented. This reminded many of an earlier instance when he'd stopped work to protest the Sena's ill-founded objection to a painting depicting Shivaji as Vishnu. Mehendale said that it was a sin for the miscreants to use the name of Sambhaji, who was a Sanskrit scholar and a patron of art and culture.

While Pune BJP MP Pradeep Rawat denounced it as "an act of cowardice resulting from a Taliban-like attitude", R.R. Patil, the state home minister, has vowed to "trace the brains behind the hand that attacked the institute". M.G. Dhadphale, former institute secretary, rues: "While shouting the name of Shivaji, they tore books on him, demolished the statue of Goddess Saraswati and made away with the idol of Ganesha."

The city's research and historical institutes have since beefed up their security. Police protection has been provided to ten more scholars who Laine had interacted with. The Sambhaji Brigade has already threatened to target Pune's historic Brahmin enclave Shaniwarwada, which is still loathed by the anti-Brahmins as an icon of the city's traditional upper-caste identity. Observers say this is yet another bid to stir the dormant Maratha-Brahmin feud.

To many Punekars, the attack on an institution set up in 1917 is a blot on a city that takes great pride in its cosmopolitan culture.It's places like the Bhandarkar institute that make Pune what it is. Which is why January 5 will go down as Black Monday in the city's history.