A Tale In Figures

Between the Diwalis it has been more glitter than gold 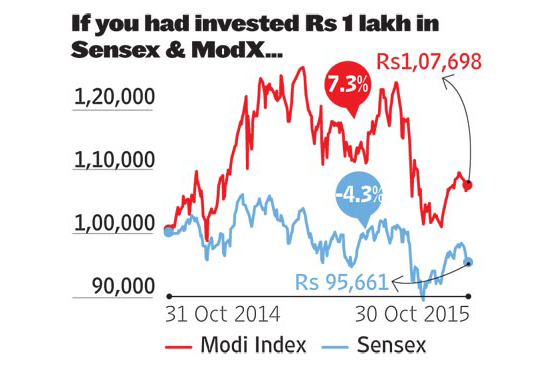 Diwali is a good time to buy something new. Last year there was a new government in town, and it was a great time to invest in the Indian economy. But if you had bought into the Sensex at the end of October in 2014, your investment would have fallen nearly 5%. The rupee, in the same time, has gone from 61.5 to a dollar, to 65.5 to a dollar. In effect, people from foreign countries that invested in the Sensex, saw a further 6% fall in their returns. So the first Diwali-to-Diwali return of the Narendra Modi government hasn’t been a blast. Earlier this year, Outlook presented an index called ‘ModX’—which contained 15 stocks that we believed would benefit from the rise of Modi. The starting date of the index was January 2014.

We measured the performance of the Modi Index bet­ween October 31, 2014, and October 30, 2015. ModX outperformed for most of the year specifically, till August after which it has fallen substantially. So, if you had invested Rs 1 lakh in the Sensex on Jan 1, you would be left with Rs 95,661— which is a -4.3% return. A similar investment in the ModX would have left you with Rs 107,698 today for a 7.7% return. That translates into an outperformance of 12% for the ModX.

Ten of the 15 stocks in ModX have negative returns for the period. BHEL (-23%), Reliance Infrastructure (-38%) and L&T (-15%) reflect the dismal lookout for infrastructure stocks. Tata Motors (-28%) has had a rough year. There’s been no real love for tourism either. And it has been the same for power stocks like Powergrid (-11%) and NTPC (-11%)—we apparently have much more power today, but not enough money to go around to pay for it. Jet Airways has been the best performer with an 88% return, on the back of lower oil prices. The Railway picks did well too, with BEML going up 72%, and Texmaco Rail followed up with a 35% return. Adani Enterprises demerged into four companies, which makes it very difficult for us to track, but the net value has increased about 24% during the year. However, stocks are only one part of the economy and much about them depends on non-government influences, like foreign investors leaving, or a global crisis. Foreign investors did invest a lot of money in the first four months of the year—over Rs 48,000 crore—but have since pulled Rs 20,000 crore out of the markets. However some of this could be about jitters about emerging markets in general. However, unlike many of those countries, India is a net importer, and we should have benefited from the fall in prices of crude and metals. But the Modi government decided the money would be less useful in our hands than in government coffers, so they hiked the duty on petrol and diesel and kept pump prices high. They increased the duty on steel, cars and other metals so our industries would not have to cut prices. While the government has made its money, the rest of us haven’t.

The GDP calculation changed, and growth magically showed at the 8% level from the 5% it used to be. But in the two quarters since, we have seen the number go back to 7%.

Corporate results have nosedived, with aggregate profits of the Sensex companies declining for two quarters in a row. Public sector banks are in trouble with large non-performing loans. The financial system sees a much lower credit growth (less than 10%) in the year, where the RBI has cut interest rates by 1%. But no impact of that rate cut on dem­and so far. There are positives—industrial growth seems to have revived. Inflation is much lower today, even if there was a scare with pulses. The bad monsoon does not seem to have impacted prices yet. Indian e-commerce players and other startups seem flush with money from abroad. But all told, the disappointment is palpable. The government has a majority, and so, so much could have been done. Promises of lower taxes have resulted in higher taxes. The government is even bigger now. We have been promised reforms, but very few have happened. Patience is wearing thin. While the attention is on intolerance, another kind of blood is flowing through our balancesheets. The time to act is now; let’s hope the report card next Diwali is better.

In August, after his brief visit to the UAE, Modi got their government to pledge investing nothing lower than a whopping $75 billion in India. It remains to be seen how that pledge translates to reality.