Somewhere along the last decade, sophistication entered the corporate columns. Then and now, and the new laws of success. 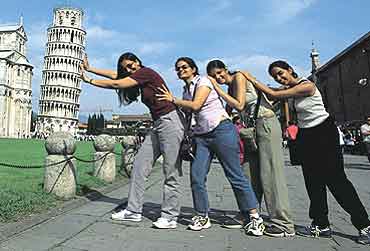 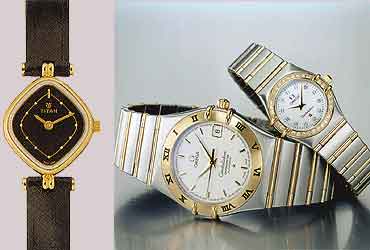 Watches: Time of Our Lives
Then, the faithful timekeepers of the nation, hmt, were making smaller versions of the men’s watches for ‘ladies’. "Even then, with Indian design motifs on the dial and delicate gold-plated straps, Ragas were a success with women," says Manoj Tadepalli, marketing head, Titan watches. Male counterparts were sporting Omegas acquired from abroad. Ten years on, Omegas are a cross-gender success, along with the exclusive Baume et Merciers. While dress dinners are a time to flaunt Chopards and Cartiers. 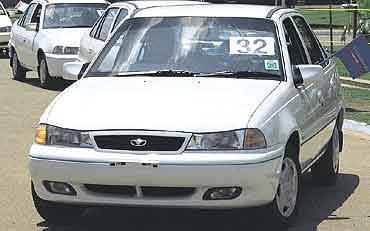 Cars: From Town to City
A stretch limo it wasn’t. But the Daewoo Cielo was "the default car for executives in ’95," says Hormazd Sorabjee, editor, Autocar India. Also for the white shoes-white pants brigade who wanted to separate themselves from the mini-Maruti-minions, without buying the other big option, the low-slung Maruti Esteem. Now, with mid-size (and maxi) cars by all brand majors crowding the market in candy colours, Sorabjee identifies the new Honda City as the most popular executive car. "A far superior vehicle than the Cielo, it’s reliable and trouble-free." Hidden delight. The window hooks to hang a suit jacket. 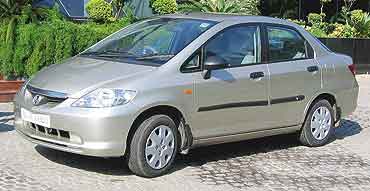 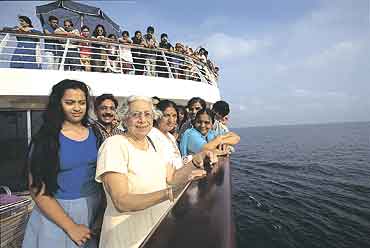 Holiday Destinations: Liner Notes: On Cruise Control
Forex allowances for personal travel were still a piffling $500. And the undifferentiated destination was Europe. With 7 cities in 7 days, cut price tours crammed in breakfast in Belgium and lunch in Luxembourg. The other itinerary was New York-Las Vegas-Disneyland. Now, the world has finally become a smaller place. Says Amita Munshi, spokesperson for Thomas Cook (India): "Executives have graduated to two vacations a year. A chillout break in the Maldives or Mauritius and another in-depth tour of Turkey, Helsinki or Alaska...for value experiences." In country, Kerala, with Kathakali and kettuvallams (houseboats), is the new favoured haunt along with eternally golden Goa. 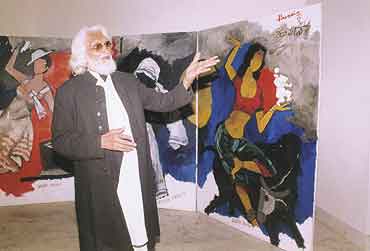 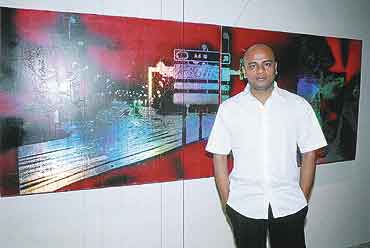 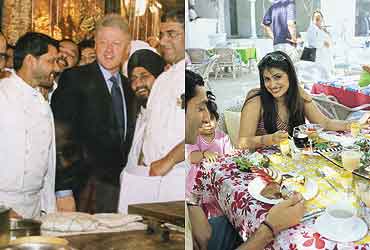 Restaurants: A Toss-up Salad
The banker boys in Mumbai had just figured out that the best places to eat...are where the taxi drivers did. So fish houses like Mahesh, Apoorva had "Kingfisher-types" trooping upstairs to the A/C section. But fish heaven for the Fortune 500 wannabes was still Trishna and its garlic butter crab. In Delhi, post-noon, you’d find expense account-funded ceos, with their bibs buttoned to their collared shirts, raving about the raan, burra kabab and trademark dal at Maurya’s Bukhara. The new ambient flavours are Med and experimental. The eateries that rule are Mumbai’s classy, bold and imaginative Indigo—and yes, Olive, in Delhi, house of fashionable food. 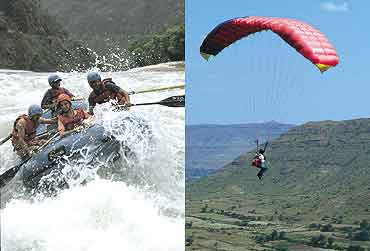 Adventure Sports: Down the Rapids
Corporate jocks were just venturing out into the great outdoors then, returning triumphant after a weekend of rafting without turning turtle. Says Ganeve Rajkotia of rafting outfit Himalayan River Runners: "Now it’s slowly changed into an outdoors team-building exercise." Back home, tamer, greener sports like golf are time-tested ways to do business on the course. And with Stanchart sponsoring the Mumbai Marathon, honchos are suddenly pounding the pavement too. As for Sundays? Get out the F1 racing flags. 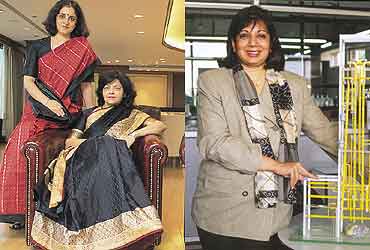 Workwear-Women: Pallu and Pleats
Old-timers like Naina Lal Kidwai and Anu Aga still endorse the sari. Even as Kiran Mazumdar-Shaw, the richest woman in India, charts the heights in a business suit and silk scarf. The dress code for the corporate eve is smart western casuals—pleated trousers, full-sleeved shirts in solid colours—often with bell cuff, complemented with a matching scarf/stole and accessories. Stores like Shopper’s Stop, Westside, Pantaloons, Lifestyle and designers like Anjana Bhargav have separate lines for her. But unlike men, women continue to stick to black, brown or blue suits. Pinstripes are a must. Perhaps a reminder of the glass ceiling that looms large over the corporate world. 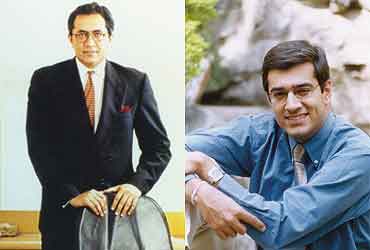 Workwear-Men: Informal Formals
When India opened its doors to the world economy in the early ’90s, it also opened the doors of a corporate closet that dared to think beyond white and blue. The pink shirt gifted by your wife is no longer saved for "informal occasions" but can be worn for even agms. Lavender, green, yellow, lilac are colours of India Inc, who shop at Hugo Boss, Daks, Zegna, Hilfiger, IndePret and Ravi Bajaj. Pleated trousers are passe. And travel worries have been ironed out with the arrival of anti-crush-flat-apparel. Dressing down is in on Fridays when neckties get cutesy with Tweety birds and animal motifs. 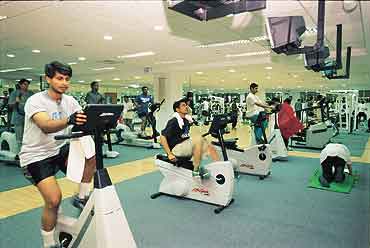 Health: No Fat Diet, Tread Lightly
In India, one often hears that prosperity shows up first on the belly. Not in these carb-conscious times. Now when you get a breather from the day’s appointments, instead of going for a smoke in the cafeteria, execs prefer to sweat it out for 20 minutes on the treadmill at the in-house gym—an unheard of concept in the early ’90s. Just like having corporate gurus who teach stress management to thirtysomething over-achievers who want to topple L.N Mittal on the Forbes list in the next five years. Managers are also conscious of what they eat; lipid profile is an index of company profile.

Gadgets: A New Ringtone
The Pentium-I PCs cranked up and dictaphones were within reach then. Now, it’s the dawn of convergence—as phones, e-mail and computing coalesce into smart phones—and with pdas (personal digital assistants) the secretary era is out. "ceos today are more accessible than earlier, due to their smart phones and the democracy of e-mail, that allows people to bypass the maze of bureaucracy," says consumer goods analyst Harminder Sahni, principal, ksa Technopak. 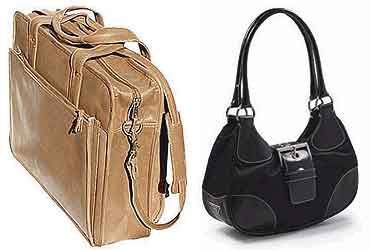 Accessories: Prada In Your Prime
Today, nano technology ensures that the only weight that execs carry is of their intellect. Yet, showing off a La Salle or Hidesign portfolio does no harm unlike that bulky vip briefcase. Cufflinks are a thing of past though, as are pearls. Instead, understated detailing like initials stitched either on the cuff or inside the collar accentuate the sensitive side of the chairman. Match the colour of your Prada or LV with the boots/sandals. Shawls have called it a day. Lip colour that matches your toe paint might just brighten up a boring meeting. The trick is to fuse power with panache. So, spectacles, with not-so-garish frames, yet a Christian Dior or a Carl Zeiss engraved. 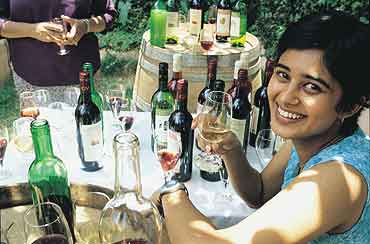 Wines: Give Us Our Daily Red
Vino by the vineyard in ’95? Hardly. All the corporati got to drink at a power lunch was Indian Bosca or horrendously priced and unfamiliar foreign selections. Wine vocab was restricted to: red, white and refill. Within a decade, though, wine racks have become a fixture in home bars, wine menus have gone from skimpy selections into pages, while snobs wax eloquent about their Cab Sauvs, heavy Bordeaux, Burgundys and new worlds. Says Ritu Dalmia of Delhi’s fine-dine restaurant Diva, "Red rules." In ’95, the red-white divide was 50:50, today it is 20 white and 80 red, she says. Some globetrotting execs can even identify wines by their tannin content. New awful after-hours slips? "How much did you pay for this plonk?" 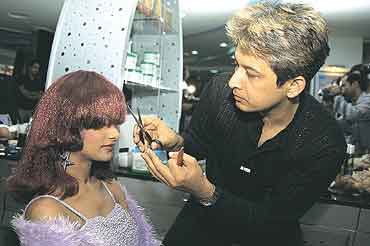 Tress Chic: The Cut And The Crown
The archetypal businesswoman with short-cropped hair has taken a back seat with the bunned lady as the co-passenger. Colouring, straightening, perming is as commonplace as women in the HR department. Mid-length-hair with lots of volume and soft curls is the tress mantra. The blonde look is for the under-achievers. The globe-trotting ceo/md prefers shades of mahogany, auburn for her power locks that give her the distinct Asian look from those much-desired Asian markets. Ten years ago, execs who could splurge on hair were balding and those with lots of hair had very little money. Now that ceos are touching 40, the crown is as important as the shine on their shoes. Long hair is sacrilege, hair trimmed till the nape ideal. Moustaches are passe. While gel, mousse and hair spray have replaced greasy Brylcreem in the toilet cabinet. 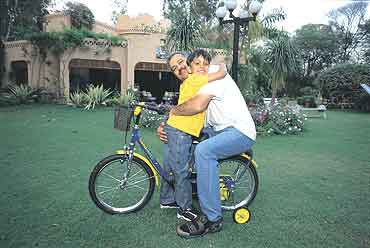 Parenthood: Babyproof Workaholics
Looking after the tiny tots has emerged as the soundest investment for both employees and employers. With more and more prized employees being working mothers—grappling with stubborn clients and cranky babies—offices like the icici have opened in-house creches. Papas too aren’t always away at office. "I don’t mind getting up early at 5 to get a head-start if I can leave office by 5 in the evening and spend time with my son," says Arvind Alagh, commercial manager klm-Northwest. Organisations like niit even offer paternity leave. 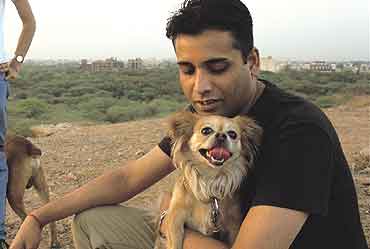 Art Of Living: The Metrosexuals
Feelings didn’t really matter a decade ago. In the market, your image was that of a toughie who wasted no time on emotions. The rules have changed. It’s no longer enough to be an asset just to the organisation, but pressure is building up to be a multi-tasker: a caring husband, doting father and a dutiful son. "Corporate corridors too are friendlier now and no one is in awe of his/her boss," says Alagh. At places like niit, people won’t raise eyebrows if you marry a colleague. In fact, the company gives a dating allowance to encourage in-house matrimonial alliances.