A Surrogate Sisterhood For Hire

Where families absolve themselves of responsibility for old parents, an organisation fills the blanks 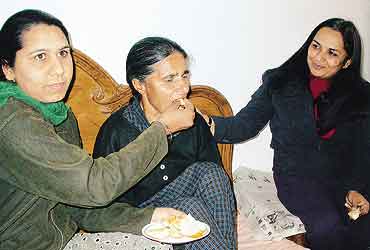 outlookindia.com
-0001-11-30T00:00:00+0553
Raminder Kalsi’s telephone rings persistently. Yet another needy Chandigarh resident is on the line, pleading for one of her health attendants to take care of a sick elderly person in the family. Nowadays, most of Kalsi’s time is spent on juggling her group of trained women from one family to another "trying to cope with the huge demand."

Amid the sprawling units of Corbusier’s urban idyll are constantly enacted tales of loneliness—of retired parents in the winter of their life, their children long gone in pursuit of greener pastures. Take the case of Amarjit Kaur and her husband G.S. Grewal. They returned from the UK to settle down in their dream house here. But with the children abroad, there is no one to take care of Kaur, wasting from Alzheimer’s. There was no way but to hire a health attendant. The story of 85-year-old Kulwant Kaur is equally morbid. She lives alone in Mohali with her immobilising arthritis. Unwilling to live with her daughter in Chandigarh, she has decided to opt for full time help. Now, two nurses take turns to look after her day and night.

In other cases, children may be around but few have the time or inclination to attend to an old mother or a father immobilised by stroke. When Kalsi, honorary general secretary of the south Punjab branch of the All India Women’s Conference (AIWC), began training girls in first-aid and home nursing for the aged, she never imagined there would be such a huge demand. "Today people expect me to conjure up attendants for them," she says. Her group of 80-odd women comprise Chandigarh’s largest bank of health workers, many of them on round-the-clock shifts in different households.

The girls, mainly from the impoverished outbacks of Punjab, have also benefited from the programme as they get to earn about Rs 2,500-Rs 3,000 a month. The programme was started by the AIWC with some financial help from Chandigarh’s Social Welfare Advisory Board. But for some reason, the government scrapped the scheme as no other organisation seemed interested in the course.

Kalsi then approached the Scheduled Caste and Backward Caste Financial Corporation; it agreed to finance her for training 10 women. Instead, she used this money to train 20 backward caste women and added another 10 girls from the general category in the same batch. To date, the AIWC has trained around 80 girls in first-aid and home nursing. Each trainee is given a certificate of proficiency on the completion of the programme. But with the government or the AIWC unable to chip in, Kalsi is exploring alternate means to keep the programme alive.

The trainees undergo a four-month course which is free of cost. The first part is a month-long theory capsule. For this, Kalsi has roped in the services of a nursing instructor who lives in the AIWC hostel. The next three months are spent at the General Hospital in Chandigarh where the women undergo practical training in changing catheters, sponging patients, feeding, and making beds. Once initiated, the trained hands charge Rs 100 per day and Rs 150 per night from patients.

"This winter, I got a lot of calls from patients with hip injuries who need someone to help," says Kalsi. It is not just the well-to-do who seek these services. Even middle-class working families are willing to spend the extra amount for their ailing parents. The demand is so great that many who knock on Kalsi’s doors are disappointed. Most of the girls are already booked and training of new batches has stopped due to shortage of funds. Kalsi wants to train another batch. She has no dearth of students, nor is there a lull in demand for health attendants. Only the funds to marry the two is not there. Kalsi can be contacted at AIWC Hostel, 286 Sector 11-A Chandigarh. Tel: 0172- 2743796.

'Our Pact Is Independent Of Indo-Pak Dialogue'