A Straight Shooter On The Hip

In its 15th year, crime drama CID continues to prove the drawing power of reductive logic 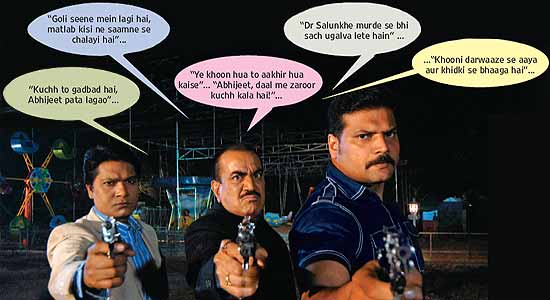 Nothing about Shivaji Satam quite prepares you for his caller tune. It is a high-pitched, uber-cheerful, nasal twang that proclaims: “The person you are trying to urgently reach is having tender coconut water on the beach; He’s having a good time, just leave.” It certainly leaves you with no option but to switch off the mobile, wait patiently to recover from the uncontrollable bout(s) of laughter and then brace yourself for the second attempt.

Satam is less known for whiling away time on the beach than for solving thousands of criminal cases—all on a TV set near you. For a show that’s been at it the longest of any in Indian television history. Satam is better known as ACP Pradyuman of CID, the show that for 15 years has consistently been amongst the top three for Sony Entertainment Television. So entrenched is Satam’s stony-faced ACP in the public mind that a news report last week announcing his retirement from the country’s most popular crime investigation department, when his contract expires in December, had loyal fans in fits. The channel denied the rumours as it announced the launch of CID Kolkata Bureau with Bengali versions of the original’s characters. But that bit of gossip was enough to set netspace—the several Facebook fanpages and Twitter bots—abuzz, with Anand-inspired homages: “ACP maraa nahin, ACP marte nahin”.

Not implausible for a series that counts no less a worthy than Lata Mangeshkar among its fanatical fanbase. “She spends copious hours watching it and calls the cast over to her house every couple of months,” says Sneha Rajani, senior executive vice-president and business head of Sony Entertainment Television.

CID’s forensic history dates back to a Marathi crime serial called 100 (Ek shoonya shoonya). Directed and produced by B.P. Singh, the creator of CID, it again had Satam playing the lead. “It rivalled a popular show like Chhayageet at that time,” remembers a gentle Satam, who is in the habit of rounding off each sentence with an “oh yes”. The duo of BP-Satam, who have known each other for over 30 years now, then decided to prepare a pilot version of CID for Doordarshan, but it eventually ended up at Sony.

There’s criticism about how it’s a crime show for dummies. And there are the CID-themed jokes. All have added to its cult status.

In the early days, filmmaker Ashutosh Gowariker used to play the ACP’s lackey, till he got busy with Lagaan. Over the years the show has evolved technically and its production values have improved. From shooting in studio sets and around Mumbai locales, they have travelled far—Rajasthan, Kerala, New Delhi, Calcutta, Kullu-Manali, even Switzerland, France and London. What has also changed is the nature of crime itself. “Earlier they were simpler. Now we even have a separate cyber crime cell,” says Daya Shetty, better known as senior inspector Daya, famous for breaking doors with an alarming regularity, an actor with a record number of wrecked doors to his credit.

All the while, the team of writers has kept changing. Yet, the core of the serial has remained unchanged. The actors are the same. The ACP’s now-legendary lines flow on, his mannerisms are the same as is his angry, furrowed eyebrows-flaring nostrils look. Curiously, no one in the team, neither the ACP nor the inspectors, has been promoted in the 15 years. Nor has their white Toyota Qualis been replaced. Moreover, most episodes still end with the ACP telling the culprit: “Tumhein to phaansi hogi (You will be hanged)”.

Ask Satam if he isn’t tired of repeating the act week after week and he shoots back rhetorically: “Would you have asked Sean Connery if he was bored of playing Bond? Do you ask Sachin Tendulkar if he’s bored of batting?” Shetty, last seen in Johnny Gaddar, considers himself “blessed”. “I’m content with CID,” he says. Aditya Srivastava, aka Inspector Abhijeet, was initially reluctant and signed on for only 26 episodes. He hasn’t broken away, despite a superb performance as Badshah Khan in Black Friday and later in Gulaal and Kaalo on the big screen. “CID has never been monotonous,” he says.

The shoot takes up most of their time, 25 days a month, sometimes even 29. So the actors hardly find time for anything else. Satam, a well-known Marathi stage and film actor, was last seen in a Hindi film in 2006, Taxi No. 9211. “We hardly get time to unwind, but I can shoot for it 40 days a month,” he says. Money and fame apart, what keeps the cast going is the fun they have. “We are more than friends. We are a wonderful extended family,” says Srivastava. “We share fantastic chemistry off screen too,” says Shetty.

So what gives? There is criticism about how CID is a crime show for dummies. It’s not slick; rather basic even. Its cult status derives as much from being the butt of many a joke. “It doesn’t have the nuances of a show on Fox Crime. But it’s this simplicity which cuts through the various (social) strata,” says Rajani. It’s a rare show that reaches out to families, is watched by 4-year-olds as well as the 80-plus crowd. “It cuts across four-five generations,” says Satam. “There’s no gore; it doesn’t make you cringe. It’s a happy show,” says Rajani. “It is something families watch while eating food. It’s crime that doesn’t repulse,” says writer Shridhar Raghavan who was a part of the original writing team. He remembers how they used to mix multiple genres. “It was like shuffling a deck of cards. One week the focus was forensics, another week a whodunit, the third an actual physical police procedural. There were also personal stories of cops in conflict,” he says.

The characters are still identifiable. For Raghavan, the ACP was modelled on the detective in Der Alte (German serial Old Fox). Honest, incorruptible, clean-cut. Someone you could look up to. “The kind of guy you’d want handling your case.”

What now after 15 years? “It’s never going to end,” says Rajani. Nor will the CID jokes. Like this gem: “Haar se pehle ummeed kyun chhodoon, Daya bola salary sabko milti hai to main akela darwaza kyun todoon?” But doesn’t the ACP want to get promoted? “That’s his prerogative,” says Satam, “Moreover, ACP sounds nice. DCP or Commissioner Pradyuman just doesn’t have the same ring.” Who can argue with that bit of deduction?