A Sting Without Venom 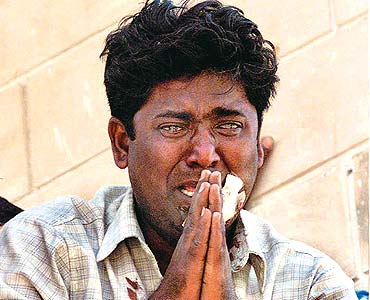 outlookindia.com
-0001-11-30T00:00:00+05:53
Sting is suddenly a suspect, if not dirty, word. But till even just a few months ago this controversial method of procuring information was celebrated as the harbinger of a bold era, the defining characteristic of "new journalism". After the infamous Delhi schoolteacher episode, which turned out to be concocted, there is palpable discomfort with this genre. Sadly, for Tehelka's multi-million enterprise aimed at exposing Narendra Modi's alleged involvement in the 2002 post-Godhra riots, even their venture has been greeted with circumspection bordering on derision. Congress, the prime beneficiary of sting operations mounted by Tehelka, its offshoots and other copycats, has issued fervent disclaimers about its alleged sponsorship of the operation, privately suggesting this may have been funded by Modi! A failed sting is like a military coup gone awry: it is an orphan.

Why did Tehelka, the original promoter of this dubious genre of journalism, get it so horribly wrong this time? First, the timing of its public release was so transparently pegged to the Gujarat assembly polls that even breast-beating secular fundamentalists found it hard to defend. Having self-confessedly collected evidence over six months, the 'stingers' failed to convincingly explain why they waited for the poll dates to be announced and the Election Commission's model code of conduct to be operationalised. "Politically motivated" is a phrase routinely brandished by Indian politicians at the receiving end of adverse media publicity. But for once, this cliche hit the bull's eye.

Second, did the so-called sting establish anything that was not already in the domain of public knowledge? That certain bestial people on the Hindutva fringe indulged in gruesome forms of torture and murder was well-known and widely condemned. The bizarre, much-publicised twists in the Best Bakery case were sufficient to drive the point home. Significantly, however, the secular fundamentalists continue to pointedly ignore the fact that the poster boy of the Gujarat riot industry, the Muslim tailor photographed begging for his life with folded hands during the violence, has returned to his home state after a stint in 'secular' West Bengal, complaining of exploitation by CPI(M) for political gains. He now avoids publicity like the plague, saying he has no desire to play the role scripted for him by Gujarat-bashers.

Third, that TV channels, which reportedly paid a packet to Tehelka for telecast rights, ran disclaimers saying they were not responsible for the claims made by those interviewed, carries its own tale. Small-time, small-town politicians are known to exaggerate their importance given half a chance. That was my personal experience while conducting interviews in remote UP and Bihar districts with survivors of the Quit India Movement for my doctoral thesis for Oxford University. Their claims had to be routinely cross-checked to eliminate self-mythification. Talking to a reporter who posed as a Hindutva champion researching for a book on the saffron surge in Gujarat, these persons could well have given free rein to their grotesque fantasies.

But what is the worth of these "confessions"? Can they stand even cursory scrutiny in a court of law? So what did Tehelka aim at? As veterans of the burgeoning sting industry, having supplied call girls and Scotch to lubricate the wagging tongues of army officers in the defence expose, surely they knew that only a political motive could be served by their unsuccessful attempt to find a smoking gun in Narendra Modi's hand?

Fourth, did they find anything against Modi? After sending out lakhs of sms alerts for three days hyping the suspect end product, thus benefiting mobile service providers and the marketing departments of select TV channels, they couldn't find even a concealed revolver in Modi's pocket, leave alone a smoking gun. Modi never visited Naroda Patiya, site of a horrifying carnage, and thus the question of his garlanding the alleged mass murderers there simply did not arise. The post-mortem report said Congress ex-MP Ehsan Jafri died of three bullets lodged in his body. No limbs were cut one after another; neither was his torso "toasted", contrary to a chilling assertion by a prominent rioter. "Modi gave us three days," claimed yet another braggart. Self-righteous secularists argue: Modi is a demon, so whatever is said against him is true and if you want proof you are a communalist neo-Nazi!

Tehelka's disastrous misadventure doesn't need further elaboration. I can only feel sorry because they tried to be too clever by half and fell flat. Nothing justifies the burning alive of 52 kar sevaks at Godhra, and the retribution that followed. But just as Delhi recovered from the Congress-supervised anti-Sikh pogrom of 1984, so much so that Punjab twice elected that party to power in the state, so has Gujarat. This time, there is no trace of a communal cloud overhanging the forthcoming election. The only issue is Gujarat's spectacular economic development despite the devastating earthquake and the shocking riots. It is for the people of Gujarat to judge who are guilty of re-injecting the virus of communalism into the state's politics; who are friends of Muslims and who are their (hidden camera-carrying) enemies.

"Tribals Are Returning To Congress"