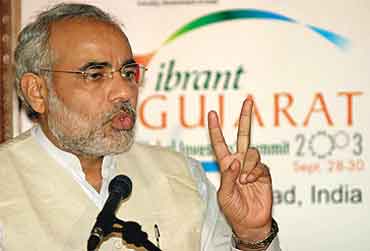 outlookindia.com
-0001-11-30T00:00:00+0553
Leaders love the lights, but Gujarat chief minister Narendra Modi was not coming to London just to watch Gujarati folk dance at the 'Vibrant Gujarat' show at the Royal Albert Hall, or even to announce some new multi-crore investment by some British Gujarati. In the shadows of what turned out to be a non-visit lay the political agenda of building up a Hindu candidate for the British Parliament.

An Operation Hindu Vote has been going on for a little more than a year in Britain now. It's an attempt to harness the community vote so as to get something back via the MPs who benefit from it. "We are getting in touch with other Hindu leaders, and we want to launch the initiative countrywide," Kanti Patel from the Operation Hindu Vote campaign told Outlook earlier. But beyond the attempt to generate a Hindu vote, these are moves to get someone politically Hindu into Parliament. Labour MP Ashok Kumar is Hindu, but not the kind of political Hindu these groups want. The House of Commons, they believe, needs an MP of the Hindutva stamp.

"Several people in the Vishwa Hindu Parishad and the Sangh parivar believe they need to make inroads within Labour through the notion that Hindus are being discriminated against. Some people will be sympathetic to the idea that there should be a Hindu MP," Suresh Grover, director of The Monitoring Group, an independent body that studies community relations in Britain, told Outlook. But their politics and the reasoning behind it could do a lot of damage, he warned.

Nevertheless, this is the game where Modi counts as no other. No candidate contesting from a Gujarati-heavy constituency could be better blessed than by Modi, hero to large numbers of Hindu Gujaratis. But none was thought more likely to gain than Modi's two political representatives in Britain, both members of the Hindu Swayamsevak Sangh (HSS), the British wing of the RSS, and both members of the Labour Party. The two also hold key positions on behalf of the Indian government and business. 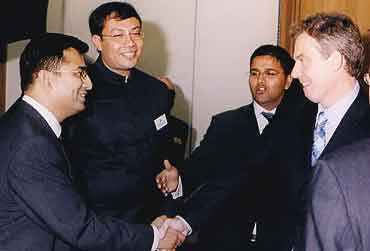 Of the two, Manoj Ladwa, Modi's feet-touching representative and spokesman, is also Britain representative of FICCI, to which he was appointed during the BJP government days. Ladwa eulogised Modi at a meeting during his last visit to Britain in 2003, and stoutly defended him before hostile media and political groups.

Modi and the Gujarat government were represented also by Vikas Pota and his company named—rather appropriately—Saffron Chase. In an unusual privatisation of Indian diplomacy, Pota was also engaged by the Indian High Commission in 2001 to deal with the Labour Party on its behalf through the Labour Friends of India group. For years now the Indian government has effectively talked to the Labour Party through a middleman who is a British citizen with an RSS background. And he and Ladwa still continue in their posts despite the change in government in New Delhi.

Ladwa denies he is looking for a Labour parliamentary ticket; Pota says "no plans or ambitions of contesting exist". These are not the kind of plans or ambitions anyone declares publicly before the time has come. But just about everyone in political circles see the two grooming themselves for Parliament. "We would be very surprised if one of them or some other Hindu candidate is not sent into Parliament soon," a senior member of the Overseas Friends of the BJP said. Good then to have Modi by your side.

"They are among Modi's main contacts in Britain and they wanted him to come. Without any doubt these people would have used their association with Modi to build themselves up. They see his popularity among Gujaratis as having an impact on their popularity," Grover said.

A visible association with Modi would have come this time before an audience of about 5,000 at the Royal Albert Hall, a massive number considering the small victory margins in British constituencies. This number would have been further enhanced through broadcast of the event on Sony Television. To the Labour Party these could add up to mouth-watering numbers in Gujarati-heavy constituencies in times when it finds the Tories getting closer and closer to its tail. "We believe there are at least 30 constituencies where the Hindu vote can make a difference," says a member of the Hindu Forum.

In the end, the visit came unstuck after Labour leaders gathered that Modi's presence in Britain could lose them chunks of either the Hindu or the Muslim vote, depending on how the visit shaped up.

That choice became stark at an event for presenting The Muslim News Awards for Excellence on March 23, when the controversy over the denial of the visa by the US was at its peak. Imran Khan, the leading solicitor in Britain taking up political Muslim issues, announced at the function that he would secure a warrant from a court to get Modi arrested on his arrival in Britain. Chancellor of the Exchequer (finance minister) Gordon Brown and Liberal Democrat leader Charles Kennedy were among the guests. The message could not have been conveyed more directly.

As such, the denial of the visa by the US couldn't have come at a more inopportune moment. The refusal was certain to be cited in arguments before a court. The plea to court would have had a British basis because three British nationals had died in the Gujarat riots of 2002. Though attempts at arrest through court action weren't likely to succeed, as they did not before Modi's 2003 visit, Khan's threat won strong backing at the Muslim gathering. It sent worrying messages to Labour leaders: if the government refused to arrest Modi, it could anger Muslim voters; if it did, it inevitably would alienate many Hindu voters.

The most suitable outcome for the government was to see that Modi kept away from London voluntarily and steer clear of a crisis that could have hurt Labour one way or another. Indeed, it suited everyone except Modi and his men that he stay back; and yet everyone says Modi took the decision on his own, and they had nothing to do with it. A British spokesman in New Delhi had said that Modi had a multi-entry visa, and that there were no grounds to refuse him a private visit. Modi's office in Ahmedabad said he was persuaded by the central government to stay back for security reasons. The pmo denied talking to Modi. You'd think that Modi just decided that London was not for him at this time of the year. Or that he was scared away by hints that his life would be in danger.

Hindu leaders close to Modi say HSS volunteers in Britain had offered to take full charge of security for Modi. "If he can move around Gujarat, he is not going to be scared coming to London," a keen BJP supporter said. The supporter and others believe that it was finally some of Modi's own supporters who were made instrumental in persuading him to cancel his visit. The politics of the Hindu and the Muslim vote hung heavy over the end of the loaded non-visit, as it had over the beginning.