A State Of Stasis

Were this a crisis out of which something creative could emerge. But it’s a paralysed polity, clinging on to power, and leaving the nation and its people all the poorer for it. 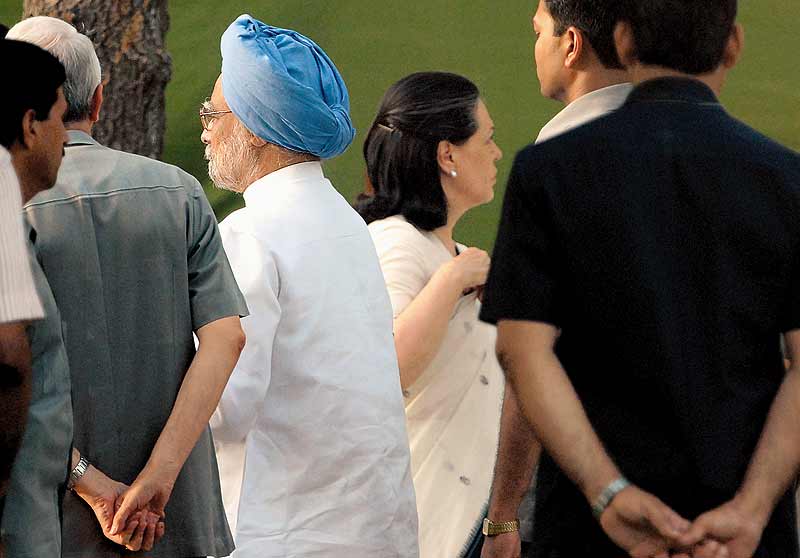 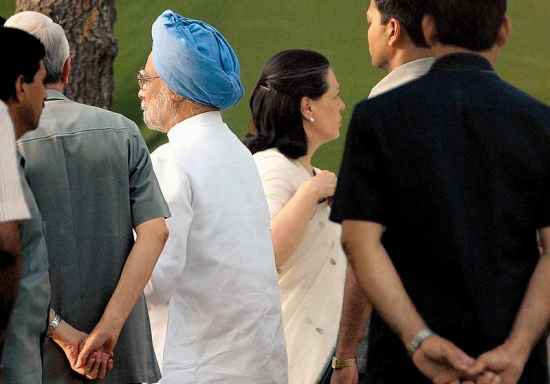 “Nothing turns out to be so oppressive and unjust as a feeble government.”

—Edmund Burke
Reflections on the Revolution in France (1790)

As political India hobbles on towards the next big test, the sixteenth general election, the pity is that its condition cannot even claim the dignity of an authentic political crisis—which is to say an irremediable breakdown that presages an abrupt change, for better or for worse, in the ruling arrangements, and offers some chance, even if it turns out to be an illusion, of placing governance and policymaking on a new track. To diagnose and describe the present condition, we need to fall back on the old Greek political concept and term-of-art, stasis, and perhaps also invoke the modern medical connotation of the term, a stoppage of circulation of some body fluids, resulting in a severe degradation of vital functions.

Stasis applies to the Congress-led United Progressive Alliance government, which is discredited, bloodied, delegitimised and demoralised, and also to the main opposition, the Bharatiya Janata Party, which is equally culpable but may be in a slightly better position only because it is not in power at the Centre. It applies to the functioning of every instrument of state, with the arguable exception of the higher judiciary and the two constitutionally sanctioned bodies—the Election Commission of India and the Comptroller and Auditor General of India. It denotes an orgy of corruption, venality and official and corporate misconduct that has seriously damaged India’s image in the world. It mocks the very notion of democracy—‘the world’s largest democracy’—being a force for the good of the people. Some of the symptoms of this stasis are a non-functioning Parliament, grand-sounding Bills that may never become Acts, policy paralysis at a time the economy is deeply troubled and fresh burdens are being placed on the poor and the middle classes, new levels of political opportunism, and insecurity in the face of escalating violence by an assortment of thugs, rapists and other anti-social forces who have been set free, like some deadly virus, to prey on the innocent and the hapless in society. The conservative Whig Burke’s 1790 dictum fits India’s current political situation like a glove.

The PM doesn’t realise that it’s the systemic transformation and policy environment of which he’s the architect that enables the present corruption.

It would not be overly cynical to suggest that the two signature achievements of the UPA are corruption beyond compare, and a collapse of leadership. That, at any rate, is the perception across the land and, allowing for some exaggeration, it must be recognised as a perception rooted in lived or observed experience. But how does one resolve the paradox of a prime minister whose reputation for personal financial probity remains intact presiding over what is indisputably the most corrupt government in the history of independent India? In an insightful and nuanced analysis of the makings of the present ‘Age of Graft’, published in Frontline, the economist C.P. Chandrasekhar goes beyond the role of individuals and puts his finger on the systemic causes of corruption in contemporary India—the economic and the political. He proposes that “the essential point is that corruption tends to be greater in periods when there is a state-engineered redistribution of wealth in favour of a few and at the explicit or implicit expense of the many”, that liberalisation is one such period, and that in such periods “corruption is not just an aberration of a few wayward individuals” but is systemic and is aggravated by tendencies in the political economy. Obviously, economic strategy and policymaking have a significant role to play in shaping or influencing these systemic tendencies, which underlie and feed the many sources of corruption.

Rule of corrupt Manmohan cited coalition compulsions for 2G, but the Sonia ‘compulsion’ is believed to have claimed his rail minister

Herein lies the solution to the paradox of Manmohan Singh presiding over a regime that has seen the surfacing of a corruption scandal, a ‘scam’ in mediaspeak, practically every other week. It is the systemic transformation and the policy environment of which he is rightly regarded as the principal architect that enable this corruption beyond compare. The tragedy of this highly educated and urbane prime minister is that he will neither recognise this connection nor do anything to anticipate, prevent or counter the corruption, notwithstanding all the warning signals and the plethora of investigations and exposes by the CAG, the news media and others. His typical response once the government’s concealment and cover-up has failed is to rationalise the indefensible by pointing to coalition compulsions and to exhort the news media not to feed negativism, dampen morale or damage the image of rising India in the world.

There is reported to be a growing feeling in the Congress camp that the ‘split’ leadership between party president Sonia Gandhi and Prime Minister Manmohan Singh is at the root of the present troubles and that the party can overcome the crisis only by collapsing the two roles and placing the responsibility, more or less permanently, in the hands of the Nehru-Gandhi dynasty. The impression, sedulously promoted by the media and unconvincingly denied by Congress spokesmen, that the Ashwani Kumar and Pawan Bansal scandals exposed and widened the rift between the two leaders, and that Sonia Gandhi had to force the hand of the prime minister who was out to protect the two ministers in his own interest has strengthened this feeling. But has the duality of leadership really contributed to the present plight? It is a relevant question and deserves a serious answer.

Far too much is made of the split leadership. It has nothing to do with the UPA’s troubles, which have to do with akratic acts of commission/omission.

A careful examination of the facts in context will show that far too much is being made of this issue. Historically, in India as well as in several mature parliamentary democracies, the established, healthy practice has been to keep the offices of the prime minister and the party president or chairperson separate. The functions are quite different, assuming of course that the party and the government are run on democratic lines. Collapsing the two roles will not serve the cause of either democracy or efficiency and, in fact, the decline of democracy within the Congress party was signalled by the practice, which began in the 1980s, of combining the two roles. Secondly, there is no evidence to suggest that the duality of leadership has anything intrinsic to do with the troubles of the UPA regime, which can be explained in terms of its policies and their implementation, its insensitivity to the challenge of mass deprivation in rising India, and its akratic acts of commission and omission. In philosophy, akrasia is to do what one knows to be wrong, what is not in one’s enlightened interest. So why do it? There is a rich philosophical and legal literature on the subject. The Manmohan Singh regime’s handling of every stage of the development of the 2G spectrum and coal block allocation scandals offers textbook cases of akratic political conduct that has taken a huge toll on the government, the ruling party and the nation. Thirdly, there is no indication that either the Congress president or her yet-to-be-designated successor, Rahul Gandhi, is willing to assume the office of prime minister, should it be available now or in future.

Chaosward There is no sign Rahul’s willing to be PM; in the absence of secure environment, instances like Nirbhaya rape are growing

Was there any inevitability to what has happened to the UPA? The evidence does suggest it need not have come to this. After all, the UPA started with some natural advantages over the National Democratic Alliance regime it unexpectedly replaced in 2004. Its spearhead, the Congress, had a larger base and a better regional dispersion and organisational spread than the BJP. While there was nothing in it between the two coalitions when it came to constituent arithmetic, the UPA had more reserves, especially as it could count on potent, if unblushingly opportunist, external support from the Samajwadi Party and the Bahujan Samaj Party when it came to the survival of the government. And until the Congress broke with the Left parties in 2008 on the nuclear deal, their external support and the interactions on policy issues resulted in the only really worthwhile, big-ticket achievements of the UPA—the enactment and operationalisation of the rural employment guarantee programme and the Right to Information Act.

The quest for stability is understandable, but the UPA’s artificially contrived, directionless longevity can only breed a state of stasis.

“India will go on,” the writer R.K. Narayan famously told V.S. Naipaul in 1961, an observation the latter would grapple with, interpret and reinterpret obsessively in his attempts to figure out what the land of his roots was about and what it needed to do to heal its deep “wounds”. While Naipaul had problems with the deep meanings he read into Narayan’s observation, it surely applies to the state of democracy in India. A diagnosis and declaration of stasis in the polity does not mean the institutions of democracy are in mortal danger. What it does imply, however, is that political India stands at a chaotic crossroads without anyone being clear about what lies beyond the intersections. The hope against hope is that the patterns that have dominated national politics and policymaking over the past two decades and brought every government and coalition of this period low can be shaken up, and that something new, untried and bold can emerge from the next Lok Sabha election, even if the experiment should prove to be relatively short-lived.

The quest for political stability is understandable but then it must be remembered that it is longevity of the UPA kind—artificially contrived and manipulative, without vision, direction, focus or integrity—that has brought on this stasis. The lesson from UPA-II as it nears its end is that political stability is not worth having unless it can be premised on democratic, just, secular, efficient, transparent and clean governance, and policies that address the internal and external challenges of rising India in a progressive way. It is not worth having unless it is able to prioritise the basic needs and interests of the overwhelming majority of the population, the hundreds of millions of working people who suffer multiple deprivations in terms of income, livelihood, nutrition, education, health, shelter, environment and gender. Making a virtue of what seems like necessity, one almost wishes for instability following the 16th Lok Sabha election, an instability that brings creative disruption and carries within itself the potentialities of a new kind of progressive politics.

(N. Ram is the former editor-in-chief of The Hindu and its group publications.)

Spot The Difference, Do!