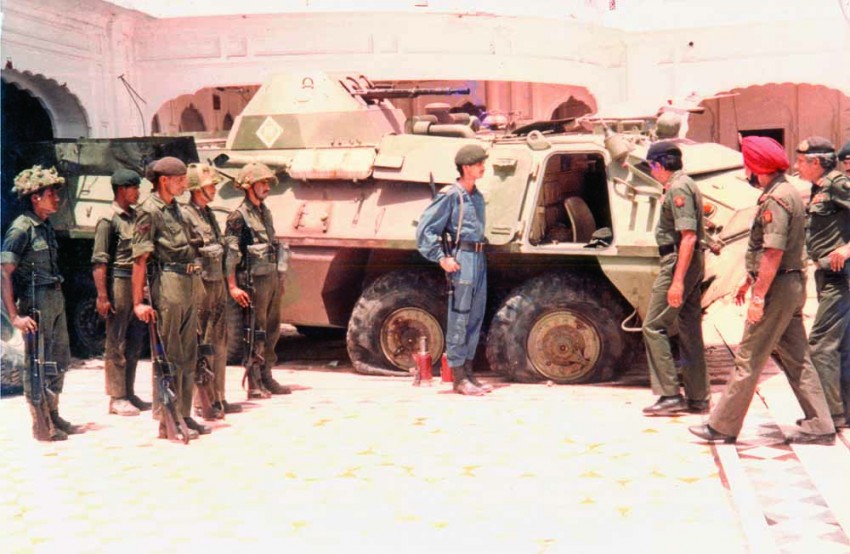 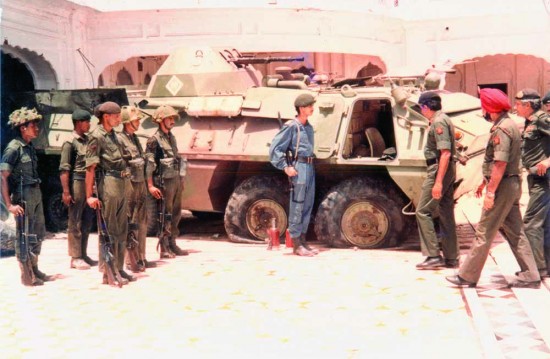 My “involvement” with Operation Blue Star began on the morning of May 30, 1984 when, during a routine visit to an army officer friend, a Major posted in the Chandimandir cantonment, I noticed a flurry of activity. “Partner, we are moving for Operation Woodrose along the Punjab border...so see you on return.”

I was then a staffer with the Indian Express and I spent the major part of the day trying to find out more on what was going on. Chandimandir Cantonment was being linked to various district headquarters in Punjab through telephone and wireless lines for what I was told was “the impending operations in Punjab”.

Armed with this information, I filed a report about the army being called out in Punjab to deal with the situation. Late in the evening, a message from our Delhi office said that the report was incorrect and should be spiked.

On the afternoon of June 1, I again visited Chandimandir and noticed a lot of activity. The initial information of the army moving into Punjab was bolstered by the presence of the entire top brass of the Western Command. The goc-in-c, Lt Gen K. Sundarji, himself was also camping there. That evening, I again filed a report reiterating that the army was in the process of moving into Punjab. This too was spiked. I was told that sources in the Union home ministry and the Rashtrapati Bhavan had not confirmed any such move. I was politely told not to believe in canards.

It was the very next evening that the ‘canard’ turned out to be true when the then Prime Minister, Indira Gandhi, addressed the nation on national television to announce that the army was being called out in Punjab in aid of civilian authorities. In hindsight, you could say, had the news reports been used, many of the devotees who got trapped inside the Golden Temple complex during Operation Blue Star could have stayed away.

One of the primary reasons for working on the television series Operation Blue Star, The Untold Story was the fact that whenever one has travelled abroad, one has faced persistent questions from Sikhs about the operation. Some of these queries bordered on myths and half-truths despite a number of books written on the subject. While most of my friends in the army, including those who were part of the operation, broadly justify the army action, many do question the mode and manner in which it was carried out.

I felt it is imperative that their part of the story is recorded on celluloid. Sadly, though Gen Sundarji spoke to me about the operation a number of times in the Rajputana Rifles Mess in Delhi (where he usually stayed), I did not have him on camera. Lt Gen R.S. Dyal, who was the Chief of Staff, Western Command, in 1984 and stayed in Panchkula before he died, rarely, if ever, talked of the Operation, leave alone on camera.

It took us about a year to put together the series. In all, over 100 people were reached and spoken to­—many on camera and some ‘off the record’. The series highlights the gradual collapse of the law and order situation in the state and militarisation of the Golden Temple complex by militants, the army’s preparation for the assault and how it disregarded vital information available with the police.

With the help of eyewitness accounts, the series also documents excesses purportedly committed by armymen, besides incidents of looting around the complex by some jawans.

One of the most unfortunate aspects of Operation Blue Star was the burning down of the Sikh Reference Library, which housed more than 1,500 rare documents and artefacts. The fallout of the operation on at least a dozen Sikh army units in different parts of the country, which was unprecedented in post-Independence India, also comes out in graphic detail.

The ninth and concluding part of the documentary points to the vital chinks in the military plan. One crucial thing that emerges is that the operation was pla­nned and executed in a ham-handed manner. The brief int­erview with Lt Gen P.C. Katoch says it all. Since he was part of one of the assaulting teams of 1 Para Commando, was injured and later rose to be a Lt Gen, his analysis is revealing.

I formed the impression that most army officers involved in the operation were overconfident. That explains why they glossed over the available intelligence with the police about the arsenal inside the Golden Temple complex. This may also explain why they failed to delay the operation, which coincided with the martyrdom day of Guru Arjan Dev. The unfortunate coincidence tilted public perception negatively, eclipsing the arms build-up and the other nefarious and rebellious activities of the people inside the Golden Temple complex.

What also emerges is that on the eve of the operation, there was a cat and mouse game played between Sant Jarnail Singh Bhindranwale on one side and Akali Dal leaders on the other. This may be because the latter lacked the plain courage required to speak their mind. Or they were playing for time.

The civilian and police administration of the time in Amritsar and Punjab, with honourable exceptions, meekly relented to the army and failed to speak up, though the army had in a formal sense been called out only in aid of civil administration.

Why does the military operation still rankle? This is because there was no inquiry at all. It was not done even by the army, though it is customary for it to critically analyse every action it carries out. There was no insistence on inquiry even by the successive Akali Dal governments (1985-87, 1997-2002, 2007-present), leave alone the Con­gress government, which ordered it.

Those who perished—even the innocent devotees—were denied dignity in death. Hundreds were arrested from the complex. Various categories of people got clubbed together—hardcore militants, sympathisers and the innocent. No wonder, the cases of ‘waging war’ against those arrested from the complex fell through while some of the criminals of that time came to be part of the political establishment subsequently.

Shiromani Akali Dal leader Balwant Singh Ramoowalia narrates how hours before the Operation began, an effort was made to force the then Akali Dal president, Sant Harchand Singh Longowal, and sgpc president Jathedar Gurcharan Singh Tohra to announce the formation of Khalistan. He also talks about having narrowly escaped being mowed down in cold blood by the army while many Sikh youth were lined up and shot.

Was there a better alternative to Operation Blue Star? The interview with Lt Gen S.K. Sinha (Retd), former Western Army Commander and later governor of Jammu and Kashmir and Assam, is revealing. He had stood his ground in 1981 when the army was asked to get involved in the surrender of Bhindranwale. Later, he said, he had laid down a ‘procedure’ for possible army action in a religious place. He also reveals his bonding with the military hero-turned-renegade, Major General Shahbeg Singh.

The series has largely been welcomed. Interestingly, while I thought I was addressing a key preoccupation of the older generation, there has been immense interest from the younger generation abroad, who appear to bond with me—a man in his late 50s!

There are of course some who are unhappy. “A pack of lies” is how a brigadier (retired) has reacted to the series. Some have branded me a RAW agent and insinuate that I must be flush with government funds by now.

Sadly, a lot of criticism is based on the very myths that I ventured to shatter. But then they say if you don’t make a lot of people mad, you have not done your job (as a journalist).