A Snag In The Works

Was it financials that scrapped the Jet-Sahara deal or is it politics again? 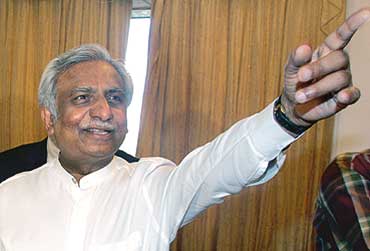 outlookindia.com
-0001-11-30T00:00:00+0553
Two issues will change the future flight path of the Indian aviation sector. The first is consolidation, which is driven by market forces. The second is a slew of new policies, being initiated by the aviation ministry. While the M&A drive has hit air pockets, the policymaking drive seems to be on course.
It was announced with great fanfare. It created ripples in the aviation sector. Most experts saw it as the first step towards a 'necessary' consolidation among domestic airlines, and there were even fears that the deal may result in the formation of some sort of a private monopoly with more than half the share of the domestic passenger market. The deal was discussed, debated and analysed. At least one of the mainstream publications put it on its cover. In retrospect, it turned out to be a flop deal, one that died a quick death even before it could take a few deep breaths.

Less than six months after it was mooted, Jet Airways' Rs 2,300-crore bid to take over Air Sahara has moved from the boardrooms to the courts, and both sides are left fuming with anger. The situation has turned so bad that Air Sahara is alleging that Jet has deliberately tried to ruin its future prospects. Jet is countering this by saying that Air Sahara had hidden critical liabilities from it. Now, the tussle is about who will get the Rs 1,500 crore—Jet maintains the figure is Rs 500 crore—that was deposited by Jet in an escrow account in the Lucknow branch of ICICI Bank.

A combination of factors were responsible for the souring of the deal, which was initially perceived to be a masterstroke inked by Jet owner Naresh Goyal. The first was financials relating to Air Sahara's operations and the deal size. Ever since the price became public, experts thought Jet was paying too much. Even the stockmarket discounted the Jet scrip, as it felt the gains weren't enough to justify the acquisition for Rs 2,300 crore. The scrip went up only after recent rumours that the negotiations between the two sides had failed. Sources in Kingfisher, which was earlier in the race to take over Air Sahara, say that they won't think of paying anything more than Rs 500-1,000 crore for the assets, most of which include leased aircraft. 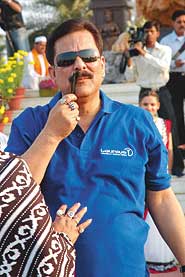 During the course of the due diligence exercise, Jet realised that Air Sahara owed an amount of over Rs 400 crore to various vendors and other parties. Since this wasn't disclosed during the price negotiations, it pushed for a 10-20 per cent reduction to make up for it. Obviously, Air Sahara, a part of the over Rs 50,000-crore Sahara Parivar owned by the Lucknow-based Subroto Roy, refused. As the deadline—the midnight of June 21—to seal the deal approached, the two sides didn't budge from their stated positions. And the inevitable unravelling followed.

Over time, Jet discovered other problems with Air Sahara's balance-sheet. For example, employee costs were 7.7 per cent of annual revenues; the figure for Jet was less than 7 per cent. Goyal thought he may be able to renegotiate pilots' and other employees' remuneration, but a strike by Air Sahara proved that this was not going to be an easy task. Similarly, aviation fuel costs, as a percentage of revenues, was nearly 24 per cent for Jet, and a higher 28 per cent for Air Sahara. Profits after tax was just over 2 per cent of revenues for Air Sahara, and close to an attractive 9 per cent in the case of Jet. Slowly, but surely, Jet realised it was difficult to improve Air Sahara's financials and profitability despite restructuring the route structure.

But Air Sahara managers contend all these issues were known to Jet before the latter signed the purchase agreement. "It's all there in our balance-sheet. Now, Jet can't complain about the financials and related issues," says a senior manager in Air Sahara. In fact, he thinks that Jet was never seriously interested in buying out Air Sahara. Goyal's motives were different: he wanted to scuttle the chances of his competitors acquiring Air Sahara; in late 2005, the Vijay Mallya-owned Kingfisher and others were keenly looking for an acquisition.

Sahara sources also add that during the past six months, Jet has adversely impacted Air Sahara's marketshare and financials. "During these months, Jet was managing the show; it restructured several of Sahara's original routes, especially on lucrative ones like Delhi-Mumbai, and all strategic and tactical issues were being decided by the Jet management, some of whom had joined the Air Sahara board. In these months, our marketshare has dropped by 3 percentage points—from 11.6 to 8.5 per cent—and our fleet utilisation has come down. We think Jet was interested in merely destroying an airline which had the capability to become its competitor in the near future," feels the Air Sahara manager quoted earlier.

Although Jet has maintained a public silence, sources deny such allegations. "No businessman spends Rs 180 crore upfront (Rs 80 crore on capital expenditure and Rs 100 crore as commitment fees) to kill competition in such a manner. And no one who's not serious will deposit Rs 500 crore in an escrow account with the realisation that it won't be easy to get back the money," explain Jet sources. Aviation experts agree that no one will stake such a large amount in a deal that's not being seriously considered. "There are much cheaper ways to deal with competitors, especially ones whose marketshare is much lower than yours," says one.

At this moment, even the escrow account is turning out to be a mystery, with Jet saying it has deposited Rs 500 crore and Air Sahara lawyers claiming the figure is Rs 1,500 crore. Market sources feel it's likely that Jet deposited a higher amount, and this additional sum didn't come directly from the company, but through one of the associated group firms. So, Jet may be unwilling to admit it publicly, as it's a quoted company and such transactions will be taken up seriously by institutional and other investors.

So, what was the push factor that forced Jet to walk out of the deal? One rumour doing the rounds is that politics played an important role. With the state elections in Uttar Pradesh due next March, it's believed that the ruling Congress Party wanted to get back at its competitor, the Mulayam Singh Yadav-led Samajwadi Party. As Air Sahara's Roy is perceived to be close to Yadav, this was one way to do so. Since Jet's Goyal is believed to be close to the aviation minister Praful Patel, the logic fits. As further evidence, political sources say that a few days ago, the minister told journalists that he doesn't think the Jet-Sahara deal makes a good business proposition. This, according to them, is an indicator that the minister may have been against the deal.

From what we can gather, it was probably a mix of economics and politics that made Jet walk away from Air Sahara. But it does spoil the party for Jet's Goyal, who wanted to be the biggest player in the domestic aviation sector, before the proposed mega merger of the state-owned Indian and Air India. He also might have thought that he could transform Air Sahara into a budget airline to compete with airlines like Air Deccan and SpiceJet. Although Jet denied it, experts felt that Air Sahara might become the low-cost wing, with Jet catering to corporate travellers. Roy, meanwhile, has been forced into a position where he may have to either run the airline, or sell it at a throwaway price in the future.

By Alam Srinivas and Shuchi Srivastava

Did Raj Mehta's Note To The Trick?