A Sieve Of A Scheme? 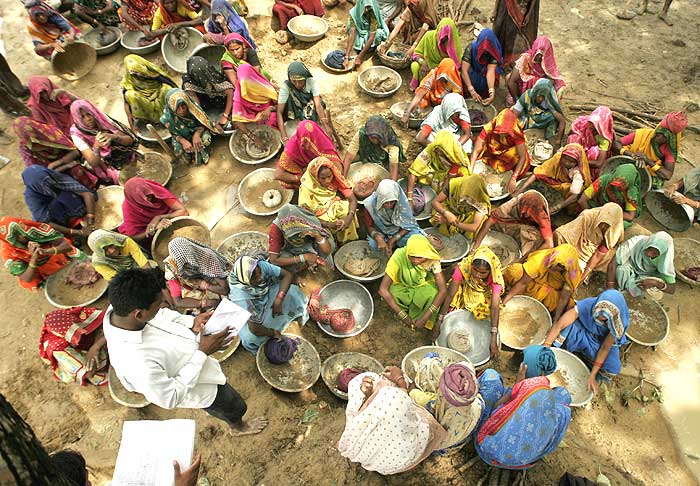 The UPA’s flagship welfare scheme, under the National Rural Employment Guarantee Act (NREGA), is becoming a cash cow for corrupt village panchayat representatives. Using loopholes, many of them have been diverting funds.  Documentary evidence gathered from Uttar Pradesh, Madhya Pradesh, Chhattisgarh, Bihar and Rajasthan by the Central Employment Guarantee Council (CEGC)—a statutory body overseeing implementation of NREGA work programmes—and handed over to the Union rural development ministry reveals inflated or fake bills are a routine affair. In many cases,  companies stated to have supplied material turn out to be fictitious.

The scale of the scam can be understood if one considers the government outlay for the scheme. For 2010, it is Rs 60,000 crore, of which 60 per cent is to be spent in wages. The rest—40 per cent, or Rs 24,000 crore—is meant for procurement of material, which is where most of the defalcation takes place. The estimated loss to the exchequer in Uttar Pradesh and Madhya Pradesh is Rs 200 crore each; in Chhattisgarh, Rs 50 crore; and in Rajasthan, Rs 700 crore. Figures are not available for Bihar, but the embezzled funds may well run into several hundred crores here too. Nationwide, the leakages surely add up to a mind-boggling figure.

Aruna Roy of the Mazdoor Kisan Shakti Sangathan (MKSS), a CEGC member, has pointed out major discrepancies in how the scheme operates in Rajasthan. In several cases, she says, supplies of building material were made on paper by unregistered firms. One bill, for example, was for cement worth Rs 40,000, and it came from a firm that turned out to be owned by a man who repairs bicycles for a daily wage of Rs 40. “It’s not a matter of just one case or two,” says Roy. “There are several. People have no idea the sarpanch is using their name and signature for his own good.”

Sanjay Dixit, another CEGC member who has worked to check on leakages in Uttar Pradesh, says, “In recent meetings, I informed the Union minister that panchayat representatives are purchasing materials for proposed projects, which are yet to take off!” In a report he submitted, Dixit pointed out that in Uttar Pradesh, toys worth Rs 50 lakh were bought for creches that haven’t come up yet. They gather dust in a godown.

In Rajasthan, the district that tops the list of NREGA embezzlement cases is Jodhpur, chief minister Ashok Gehlot’s home district. Thirty-four complaints were received in the district; police registered cases in 25. In 2006, the first year of the scheme, not a single case of irregularity was registered in Rajasthan. The next year, there were still only seven cases, and in 2008, the figure jumped to 54. This year, the number of cases registered till February is already 300. Clearly, the NREGA is helping many people get rich. Sarpanches and gram sevaks figure prominently in the list of those against whom cases have been lodged. There are complaints against district collectors as well. Rajasthan rural development & panchayati raj minister Bharat Singh says, “A probe has been initiated against some collectors, including those of Karauli and Dungarpur.”

Meanwhile, the Comptroller and Auditor General (CAG), the audit arm of the government, has also confirmed  irregularities in the implementation of NREGA projects and has suggested a tighter auditing protocol. This is a demand voluntary groups monitoring the scheme have been making for quite some time. As Aruna Roy puts it, “Corruption can be eradicated from NREGA projects through proper enforcement of transparency safeguards and guidelines that are already a part of the act.”