A Short History Of Timbuktu 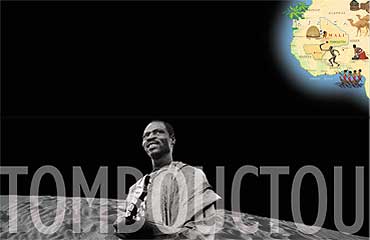 outlookindia.com
-0001-11-30T00:00:00+0553
1. Timbuktu was founded in 1100 by Tuareg nomads as a seasonal trading post and camp for gold, salt, ivory, kola nuts and slaves. Thousands of camels brought salt from deposits in the middle Sahara—along with racier goods of Egyptian, Arabian, European and Oriental provenance. Salesmen from the south met them halfway with an array of tropical trade.

2. The gold-rush rumour began with Malian Emperor Mansa Musa's pilgrimage to Mecca in 1324-1327. Accompanied by a 60,000-strong train, he distributed four hundred pounds of gold on arrival, which he claimed he'd got in Timbuktu. The Arab world was hooked.

3. In the 15th and 16th centuries Timbuktu became an intellectual and spiritual capital of Islam. 15,000 students were said to attend its prestigious Koranic Sankore University every year.

4. In the 1700s and early 1800s, many European explorers attempted to reach Timbuktu but none returned. Legend had it that they were forced to drink camel urine, their own urine, and even blood to survive in the barren Sahara desert. In 1618, a London company was formed on spec to establish trade links with this supposedly lucrative outpost. The first trading expedition ended with the massacre of all its members and the second set off in the wrong direction up the Gambia River. They didn't find what they were looking for.

5. Mungo Park, a Scottish doctor, tried his hand in 1805. He went mad after his entire crew perished and was last seen sailing down the Niger shooting at the shore.

6. In 1824, the Geographical Society of Paris offered a reward of 7,000 francs and a gold medal valued at 2,000 francs to the first European who could visit Timbuktu and return to tell the tale.

7. Scottish explorer Gordon Laing almost made it. The outward journey took him a year and a month. He was shot at, slashed by swords and had his arm broken by Tuareg nomads. He got to Timbuktu in August 1826. Unimpressed, he quit town within the month. Two days later, he was mysteriously murdered.

8. The French explorer René-Auguste Caillié went to Timbuktu disguised (to the horror of fellow Europeans) as an Arab in a caravan. He too, took a year to get there, and once he did, gave the town even shorter shrift than Laing, staying for only two weeks. But he bagged the prestigious Geographical Society of Paris prize on his return to France.

9. In this manner Timbuktu held out against European invasions until the late 1800s, when France conquered the Mali region. What with its poor communications, imminent threat of murder by Tuareg nomads and unbearable climate, Timbuktu was voted most unpopular posting by Gallic soldiers. In 1960, to the relief of everyone concerned, it became part of the independent country of Mali.

10. Even 20th century air travel fell prey to Timbuktu's black hole effect. In 1920 the inaugural flight from Algiers to Timbuktu was lost without a trace.

11. In 1988 the city was designated a United Nations World Heritage Site. Efforts are underway to protect the ancient mosques from encroachment by the Sahara.

12. If you hit Timbuktu in the summer, you may find the population converging on the Dijinguereber mosque to replaster the walls and roof with mud. They have been doing this, in anticipation of the monsoon, every year for 600 years.

13. Also known as the Blue Men of the Desert, the local Tuareg nomads still live much as they always have done—trading goods across the dunes.They are famous for their blue robes, geometric jewellery and extrasensory powers, and paradoxically for habitués of this eldorado, they lose their magic touch if they look on gold. Tuareg jewellery is worked exclusively in silver, the metal of the Prophet Mohammed.

14. Another local tribe, the Dogons, are master wooden door carvers, and famed for their vast astrological knowledge. They discovered the star 'Sirius B' some 1000 years ago. Western scientists only cottoned on in 1978.

15. Located on maps eight miles north of the Niger river, the current compass reference for Timbuktu is 16° 45' N, 3° 4' W, in Mali's sixth region. Modern travellers should have no problem finding their way there. And back.

16. As the Old West African proverb has it: "Salt comes from the north, gold from the south, and silver from the country of the white men, but the word of God and the treasures of wisdom are only to be found in Timbuktu."