The Malayali’s legendary appetite for gold will not abate 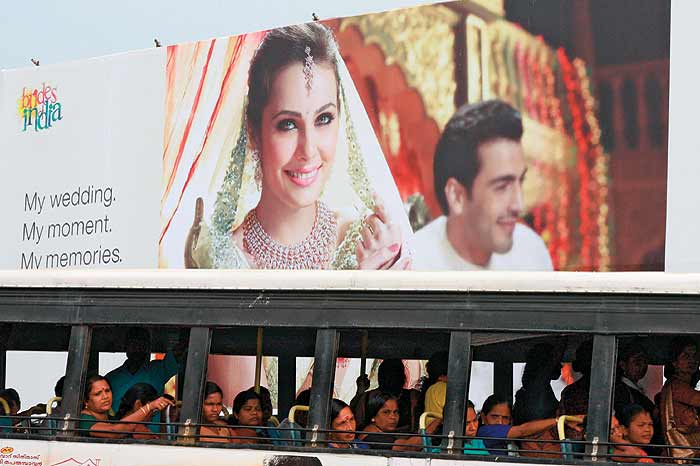 One Sunday morning in January 2010, a pastor in a new-generation church at Thiruvananthapuram was dressed up and giving his sermon. But no, he wasn’t stressing on the usual beatitudes (blessed are the poor, for theirs is the kingdom of heaven). Rather, he was urging the congregation to go out and buy gold. The pastor told a stunned gathering about his “vision” that gold prices would break the barrier of Rs 20,000. Many followed his advice, many others were scornful. One woman who did buy gold made a small fortune when she offloaded it a few months ago.

They say the pastor knew only too well the burden of his congregation. He was just helping ease it. In Kerala, a craving for gold is induced at birth. Even before the child suckles at the mother’s breast, he/she is fed gold dust with a drop of honey for wisdom and a beautiful complexion. The milestones of an average Keralite’s life are inextricably marked by visits to jewellers. Like the Bhima Jewellers’ advertisement that resounds on prime-time TV—“Pennayal ponnu venam... (If you are a girl, you have to have gold)”—it is understood that the bride is adorned with gold. Even at the literal end, some communities place a small gold piece in the mouth of the dead so that he/she may not be deprived in the next world.

Bankers and jewellers alike maintain that, in Kerala, demand for gold is not determined by the price. There are social, cultural, religious and historical reasons for the demand. The recorded evidence about Kerala’s craze for gold is available from the 1st century AD, says noted historian M.G.S. Narayanan, “The kings were crazy about the metal. Spices were sold for gold and it was chiefly used for ornaments. It was only later, perhaps in the 12th century, that the temples were decorated with gold.”

Even at the end, some communities place a bit of gold in the mouth of the dead so he/she may not be deprived....

However high the price of gold in Kerala, or so the folklore goes, people will keep buying. Outlook asked V. Balaraman, a senior company executive in Kochi, why he buys 250 gm of 24K gold every year on Akshaya Tritiya. This year he spent Rs 5 lakh-plus on gold. “I’ve been doing this for the past two decades. It’s for my daughter’s wedding. There are traditional sets that I have to give her and I won’t be able to do everything at one shot,” he says. There are 5,000 registered jewellers in Kerala catering to this demand. B. Girirajan, president of the All Kerala Gold and Silver Merchants Association, adds that “there are at least another 3,000 unregistered jewellers in the state”.

For the past two months, however, jewellers say business has come down 15-20 per cent. Is Kerala then witnessing the unthinkable, a slowdown? The naysayers attribute the slump in demand to the off-season for marriages. Others say people are waiting for the market to “correct” before they indulge. Come January-February and the shops will be packed again, they promise. Certainly, expansion plans haven’t been put on hold. Joyalukkas Jewellers, which has over 70 stores in India and West Asia, plans to add another eight in south India before March 2012. Says chairman Joy Alukkas, “There has been a 25 per cent increase in growth year on year.”

Ironically, though perception wills it otherwise, Kerala is not at the top when it comes to numbers. “Southern states account for 45 per cent of the consumption. Kerala is second only to Tamil Nadu (in consumption),” says K. Shivram, director, World Gold Council. However, in the retail sector, Kerala is believed to be the largest consumer (30-40 per cent of the jewellery sold is manufactured outside the state). “Quite a bit of the gold comes from the duty-free ports of Dubai and Singapore. Every NRI can bring up to 2 kilos of gold without paying duty and this is unaccounted for,” says Satish Pratap, MD of SPS Hallmarking and Refinery.

Jewellery remains the preferred choice, though higher prices have led to some marginal changes. It was only when gold prices increased by 60 per cent that Kerala started buying gold coins (and thereby saving on manufacturing charges). Pratap explains, “Kerala does not have a stockmarket culture. The majority invests in gold, and on an average every household has at least a minimum of 30 gm of gold. The lower- and middle-income groups go for gold because they can liquidate it easily in an emergency.” Thrissur, Kollam and Malappuram remain the pockets of high investors.

The idea of buying gold is pervasive. Interspersing the evening news, actor Mohanlal cajoles the public to buy from Malabar Gold jewellers and, almost in the same breath, the next advertisement has him promoting Manappuram Finance, a gold loan company. Gold loan companies too are flourishing—“buy and pledge” is quite the game in the state. Says Thomas Muthoot, director of the Muthoot Pappachan group, “We are faster than the banks and we offer a gold loan within five minutes. And traders use this to the maximum benefit.”

There’s a flipside, of course. Stories abound of people pledging their gold to buy white goods, and falling into a debt trap. Says psychiatrist C.J. John, “In one square kilometre of Kerala, one will find a gold shop, a gold loan agency, a bar and a party office reflective of the social evils that draw society to it. People may be literate but they have no emotional intelligence or money sense. They want quick money for their expenditure and they borrow without thinking. Some of these cases end up in suicides.” With so much demand, then, what will happen when gold prices crash? “That’s unlikely,” says Balaraman. “Supply is limited, but the hunger for gold is unlimited.” For now, Kerala’s faith in gold remains steadfast.