After the storm, the calm. A ravaged Bihar finds succour and sustenance in its CM, Nitish Kumar. 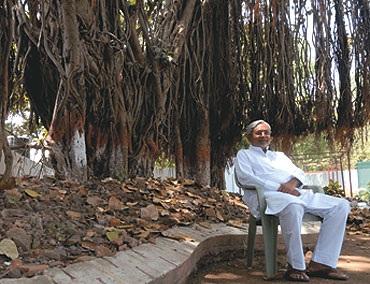 The Bihar chief minister's functioning is markedly different from that of his predecessor, Laloo Yadav.

"I am a methodical man. If there is anything on earth I hate, it is genius. Your geniuses are all arrant asses."
—Edgar Allan Poe

Nitish Kumar is certainly a methodical man. When I go to meet the Bihar chief minister, he has just spent the entire day reading 3,000 written complaints from the people at his janata durbar. His ministers and bureaucrats sit around him in attendance. The sudden heat wave that has descended on the state capital doesn't seem to bother him; he keeps smiling at many complainants and hastily dismisses the others. At the end of the exercise, he finds 1,700 complaints valid, and passes them on to his ministers and bureaucrats. And throughout, he has managed to keep both his cool, and his spectacles, on.

This is quite a leap of faith for Bihar. Its politicians are usually not in the habit of reading petitions from the public. They are more comfortable making speeches, posing for photographs with villagers and leaving the dirty work for their clerks and officials to do, who do not do it anyway. Nitish, in contrast, clearly has the patience for paperwork. His janata durbar is a remarkable feat of endurance. The CM has managed to introduce order in what can easily descend into chaos (every valid complaint is given a number), and inspired the belief that it is not impossible to seek—and get—redressal from the system.

If you ask economist Saibal Gupta, he tells you that, historically, Bihar was never a functioning state. Even before Independence, it had the most organised zamindari system and the lowest per capita expenditure on health, education and other public investments. Politicians in Bihar traditionally followed the route of forging social coalitions, seeking caste support and riding the crest of the state's many social justice or land reform agitations. Social upheaval or transformation has been seen as the key to change in Bihar; not "vikas" or development schemes.

But ever since he came to power, the government has begun preparing economic surveys (written by nationally known economists)—the first time ever in Bihar's history. The second survey published in March this year duly notes that the state has the lowest per capita income of Rs 5,772, only a quarter of the national average of Rs 22,946. "For the first time," says Gupta, "Nitish is giving the impression that he is trying to build a state. It is a mammoth task, but he has tried to make a beginning."

And it is by no means an easy beginning. Given the state he inherited Bihar in, the CM has a long way to go—that too on a path ridden with ridicule. First off the block is state RJD president Abdul Bari Siddiqui. "Nitish organised a three-day seminar on poverty indicators," he said. "I told him it is a shame you don't recognise poverty. Lalooji knows that a man who does not get two square meals is poor. Do you need to attend a seminar to understand poverty?"

Laloo certainly wouldn't. Flamboyant rival to Nitish's calm, efficient demeanour, he would never sit through a seminar or examine public petitions. Chaos, he would say in the early years of his 15-year rule, helps loosen the grip of the upper castes. Development, he famously argued, would not help the poor; its benefits would be cornered by the landlords, the Bhumihars. A master in the art of political rhetoric and guile, Laloo used caste antagonisms and Muslim insecurities to remain in power even as Bihar slipped on every socio-economic indicator. Nitish, who had co-scripted the Mandal strategy with Laloo before breaking away 15 years ago, is now a wiser man. "You can't think about Bihar in the traditional way," he says. "Mandal did empower some castes. But we can't justify the breakdown of the system and all rule of law."

And it is not as if Nitish is not forging social coalitions. He has been wooing the extremely backward castes systematically, and making a serious bid to win over Muslims, or at the very least, blunt any organised opposition to the JD(U)-BJP alliance. Syed Nizamuddin, the secretary general of the All India Muslim Personal Law Board and head of Bihar's leading Islamic school, the Imarat-i-Sharia at Phulwari Sharif, was consulted regularly by Laloo and continues to be wooed by Nitish. He is quite blunt when he says, "Nitish is serious about winning over Muslims or he wouldn't have sent two backward caste Muslims to the Rajya Sabha besides many schemes for minorities." However, the extent of Muslim electoral support, he adds, will depend on his positioning vis-a-vis the BJP.

It helps that the BJP in Bihar operates on a caste basis and does not play overt communal politics. Even so, during the assembly polls in 2005, Nitish campaigned independently and avoided sharing the platform with BJP leaders. He continues to avoid attending too many NDA meetings and was the only CM to give L.K. Advani's book release a miss in Delhi. BJP leader and deputy CM Sushil Modi says: "He never interferes in our affairs and we know he comes from a different ideological stream. Even the Bihar BJP is supportive of his effort to woo Muslims. They make up a large chunk of society and can't be ignored. Besides, there are boundaries that separate the JD(U)-BJP though we are in an alliance." 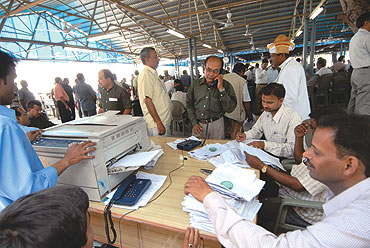 Nitish is also trying to alter other political traits that have left such a mark on Bihar society. Patna residents are stunned at the manner in which political dons are landing in jail, one after the other. Figures like the notorious Shahabuddin of Siwan have finally been convicted, and there is now a strong buzz that JD(U) MP Prabhunath Singh may get a long jail term. The results are there for all to see. There has been a sharp drop in crimes like kidnapping for ransom in just two years. The CM himself says: "Please see the numbers of those who have been arrested under the Arms Act." One of the state's top police officials says Nitish believes it's possible to change the image of a state where every small goon walks around with gun-toting guards.

Can he, though? According to Krishna Deo Yadav, member of the CPI(ML) central committee: "Laloo destroyed the state while laughing loudly, Nitish is smiling gently and destroying the state." Neither, he argues, has addressed the crux of Bihar's problem—the redistribution of land. Nitish did set up a commission to look into land reform, but its report has been buried quietly. Any development initiative, therefore, can at best bring about cosmetic changes. But then, politicians bringing about radical transformation is never the norm anywhere—and it might be unfair to judge Nitish against that. In Bihar, to even try and build a road or pick up a health system from a shambles can be seen as an achievement of sorts.

It is no surprise, therefore, that Nitish's opponents concede, albeit grudgingly, that he is currently on a good wicket and maintains a good image among all sections. Will it be cakewalk then for Nitish to trounce Laloo in the Lok Sabha polls next year? After all, the RJD, with 22 MPs, is one of the largest constituents of the UPA in Delhi. If Laloo ties up with Ram Vilas Paswan's LJP, he would have mopped up a chunk of the caste votes, making it difficult to counter merely with clean politics. But the RJD could well suffer losses. And, even as his opponents try to work out the caste math, Nitish himself is trying to rise above the electoral game and do the sort of things that have not, in the history of Bihar, reaped electoral dividends. He could well be rewriting the rules that have governed the fortunes of the state so far.

By Saba Naqvi Bhaumik in Patna with Inderjit Singh