A Rich Vein Of Dissent

Yeddy goes, kicking and screaming. Can the BJP stabilise its ship in Karnataka? 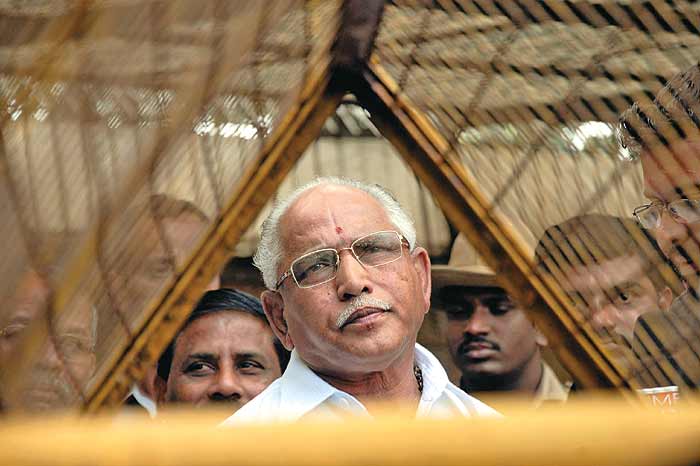 The cat has exhausted its nine lives. On July 28 evening, Karnataka chief minister B.S. Yediyurappa finally agreed to step down, ending a long defiance. A tantalising, if faint possibility of a last-minute twist was kept alive, though. As soon as news of his ‘surrender’ at BJP president Nitin Gadkari’s house came, his camp told the media an official resignation would take a few days.

It’s often said that anger is the only emotion Yeddy is capable of and it was on ample display during parleys with the BJP’s senior leaders in Delhi. “No regret, no remorse, no shame, only anger,” was how one senior leader assessed the mood of the saffron party’s first chief minister in the south.

Anger does not mean, though, that there was an absence of strategy in the Yediyurappa camp. He first pleaded that he be given time till July 31 so that he could study the Lokayukta report and seek clarifications. His idea was to seek clarifications only after Justice Santosh Hegde retired and the new Lokayukta, Justice Shivraj Patil, took office on August 2. Also, Yediyurappa is said to be forwarding non-Lingayat names for the CM and deputy CM’s posts so that he could remain the “unquestioned leader” of the party’s primary votebase in Karnataka—the Lingayats. “He’s very shrewd, if things don’t go in his favour, this will help him decamp with the Lingayat legislators and form a regional outfit,” a rival leader said. Many in the state BJP were unsure even on the evening of July 28 that he would fully follow the script of the party high command.

And there was reason for the uncertainty, given the general perception of him being a wily political animal. To keep count of the number of times he has survived a challenge to his chair would be a statistical nightmare. According to one inventory, he had emerged victorious from five serious cliffhanger situations in the three years and two months he’s been CM, but since October 2009, willy-nilly, he had faced one embarrassing event every 45 days. Finally, the pressure from the BJP high command was too strong for him to avoid the inevitable.

Some feel BSY’s men made a mistake in their brazen approach on the Lokayukta, which perhaps set off the latter.

He did not give in easily though. Even on July 26, after his return from Mauritius, Yediyurappa kept making veiled and not-so-veiled threats to colleagues in the party. He apparently said if he had to go, he’d take down everybody and the party as well. His primary argument has always been that the mandate the BJP received in May 2008 was only courtesy him and therefore, anyone aspiring to his chair should go back to the people. The subtext: the assembly should be dissolved and a mid-term poll called. This time too, he made that argument but added a little more spice. He reportedly threatened to “expose” all the senior BJP leaders if he was asked to step down—implying that he’d put out all the private transactions they had had with him and his government in the past three years. While some of his party and cabinet colleagues saw this as a “last act of desperation”, a few others maintained it was the CM’s “fairly usual modus operandi” to create a brazen atmosphere of threat and blackmail.

Carrying forward this threat made behind closed doors, one of the CM’s troubleshooters even approached Outlook with information on the demands of a senior BJP leader’s son in Delhi: “This leader has consistently attacked our CM. The real reason for his grouse is that we did not accede to the proposal his son made on behalf of a Sindhi businessman in a multi-crore project. Since it was unreasonable, we could not accept it. He came to Bangalore close to 15 times to pursue the project. And this was just one of his demands. Whenever the demands from top BJP leaders have been within limits, we have accommodated them,” he admitted.

Some BJP members feel the CM’s men made a mistake in adopting a brazen approach towards Karnataka Lokayukta Santosh Hegde, which perhaps set off the latter. A couple of weeks back, the Lokayukta had revealed that three people, including minister for higher education V.S. Acharya, had approached him seven months ago and urged him not to include BSY’s name in his report on illegal mining. Why Justice Hegde took seven months to disclose this and what forced him to do this now is a separate issue, but the episode offers an insight into Yeddy’s operating style. Even when it came to political rivals, be it the Deve Gowda family or Congress leaders, he has always tried to shift the focus away by speaking about their alleged misdeeds and corruption. In fact, he appointed a political secretary who did nothing else but dig out documents against his political rivals. When cornered, Yeddy has had a favourite, predictable response: “Why blame only me, they too have been corrupt.”

After the Lokayukta report leaked, one of his top aides asked Outlook: “Why should the CM be blamed for illegal mining? If at all anybody should be blamed, it has to be L.K. Advani and other central leaders.” The reasoning was typical of Yediyurappa’s sophistry. He said in October 2009, when the Reddy brothers rebelled, it was in Advani’s house that the CM was forced to compromise with the Bellary mining mafia. “What Advani is saying today about the BJP’s image and credibility, we spoke about it then. We said let’s dissolve the assembly and go back to the people instead of compromising with these elements. Nobody heard us. Nitin Gadkari was not on the scene at that point and Advani was all-powerful. He was still leader of the Opposition in the Lok Sabha. Party general secretary Ananth Kumar waited for a day to present the compromise as a birthday gift to Advani on November 8,” he said. The effect of this compromise, the aide recalled, was the reinstatement of 64 officials who had earlier been transferred out of Bellary to curb illegal mining; the moving out of the CM’s “efficient” principal secretary; and the dropping of “trusted” minister Shobha Karandlaje. “Yediyurappa was in tears that day,” he added.

BSY’s legacy is creating a bipolar polity where only the Lingayats and Vokkaligas, the two big communities, matter.

Going by what Yeddy’s men are trying to share with the media, it looks like his heartburn will take a toll on the BJP even after his quitting. Of late, he has constantly felt persecuted by the high command. In February 2011, when the governor gave sanction for prosecution, this is how another aide briefed Outlook: “The CM prefers going to the polls than handing over charge to another leader. He built the party for the last three decades and brought it to power. When he has mass support, why should he listen to the commands and reprimands of Delhi leaders?” Pointing to the Shibu Soren case in Jharkhand, he had said, “The man was convicted in a murder case but was still made CM. Is our CM’s case as bad as that? So why these double standards? What image issue are they talking about?” Five months down the line, to the detriment of the BJP, this argument is still relevant for Yediyurappa’s camp. The question they raise is: will a government without him ever be stable?

Those who strike an optimistic note say that the moment Yeddy gets off his power-saddle, the MLAs surrounding him now will disappear. Plus, there’s the legal cases which will catch up with him. They also point to the fact that only 17 legislators, including ministers, turned up at the airport when he arrived from Mauritius on July 25. This, despite Yediyurappa having asked many of them to turn up as a show of strength. And on July 28, after the BJP parliamentary board made its announcement that BSY has to quit, the number of legislators holed up in his house oscillated between 11 and 15. The prediction is that these numbers will only dwindle in the coming days.

As regards the party, the BJP’s numbers in the state assembly are pretty delicate. It currently has 120 MLAs, including one independent legislator. Even if 7-8 stick to Yeddy, it could become a tense play for survival. The consensus in the rank and file is there would be greater stability if a Lingayat is brought in as a replacement, because that would send out a ‘positive message’ to the party’s support base, especially in north Karnataka, and also, ensure continuity of the party’s engagement with the powerful Lingayat seminaries.

So now, assuming that Yediyurappa has stepped down, what is it that he leaves behind? As senior Kannada journalist Mahadev Prakash puts it: “The four pillars of Yediyurappa’s administration has been corruption, casteism, inefficiency and manipulation. Where has he had the time to govern? Their first year in power was a year of bypolls because they poached MLAs (Operation Lotus). After that, it has been one crisis after another.”

Socially, what Yeddy has done in the past three years will take a longer time to heal. He has tried to create a bipolar polity where only the two dominant communities—the Lingayats and Vokkaligas—matter. He has split the backwards and Dalits and exploited them for short-term electoral gain.

It’s common knowledge in the state that Yediyurappa and his camp followers worshipped at the feet of Mammon. It is said that every posting had a price tag and every public works a commission. The RSS, after the October ’09 rebellion, had specifically asked BSY to keep his family out of state matters, but he turned a deaf ear. “Money made them forget not just ideology, but even the most rudimentary political graces,” says Congress leader Siddaramaiah. The BJP high command, which never asserted itself in the past, has to now sadly watch from the sides as their first CM in the south goes down with a taint that will take years for the party to wash away.

Conference Call, Was It?