A Return To The Dark Ages

If national progress is our aim, the freedom to think, to dissent is essential. The irrational must be weeded out. 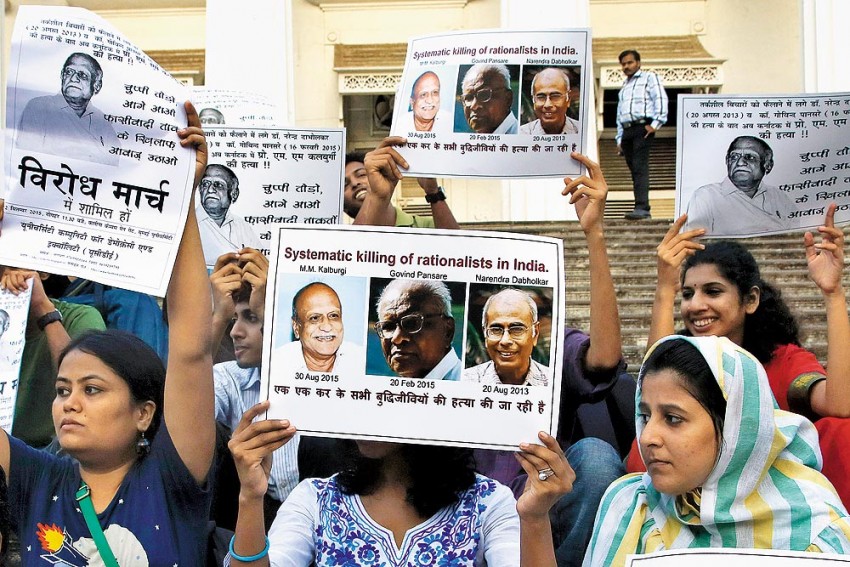 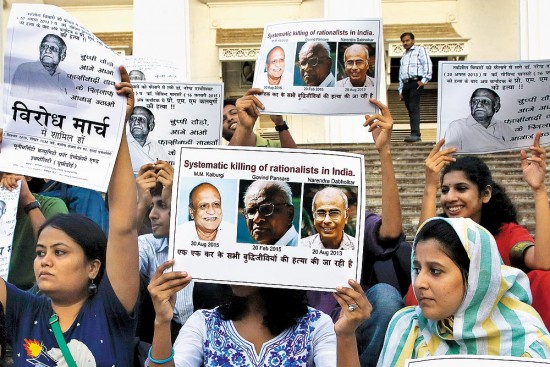 The cold-blooded murder of Prof M.M. Kalburgi, Narendra Dabholkar, Govind Pansare and other anti-superstition activists raises the issue of the importance of the voice of rational dissent for our country’s progress. What is our national aim? To my mind, our national aim must be to make India a highly prosperous country for its citizens, and for that it is necessary to have a high degree of industrialisation, and for this it is of the utmost importance to spread scientific thinking to every nook and corner of our country, and combat superstitions.

A democratic society permits freedom of speech and exp­ression, freedom to practise one’s own religion which is based on tolerance, and freedom to dissent and criticise. These are precisely the values of the scientific community. In other words, in scientific matters authoritarianism and dogmatism are wholly out of place. Scientists must be left free for innovation and creativity. Hence, democracy and liberty go hand in hand with the growth of science because both are based on tolerance, individual freedom and free flow of ideas.

Justice William Douglas of the US Supreme Court in Ter­m­iniello vs Chicago, 337 U.S.1 (1949), observed: “...A fun­ction of free speech under our system of government is to invite dispute. It may indeed best serve its high purpose when it induces a condition of unrest, creates dissatisfaction with conditions as they are, or even stirs people to anger. Speech is often provocative and challenging. It may strike at prejudices and preconceptions and have profound unsettling effects as it presses for acceptance of an idea. That is why freedom of speech, though not absolute, is nevertheless pro­tected against censorship or punishment, unless shown likely to produce a clear and present danger of a serious substantive evil that rises far above public inconvenience, ann­oyance or unrest.... There is no room under our Con­stitution for a more restrictive view. For the alternative would lead to standardisation of ideas either by legislatures, courts, or dominant political or community groups.”

In our own country, in ancient times the method of shastrarthas had been developed. These were debates in which the thinkers of those times had full freedom to speak and to criticise opponents in their presence, and also in the presence of a large assembly of people. It was this freedom to freely discuss and criticise in ancient India which resulted in tremendous growth of knowledge, including not just in the arts like philosophy and grammar but also in scientific domains like mathematics, astronomy, medicine. The names of Aryabhatta, Brahmagupta, Bha­s­kara, Sushruta and Charvaka are known to all.

With the aid of science, we had built mighty civilisations. For example, the Indus Valley civilisation flourished two to three millennia before Greece or Rome, what to speak of the rest of Europe. However, we subsequently took to the unscientific path of superstitions and empty rituals, which has led us to our current disastrous situation.

In this connection, we may also mention a bit of modern European history. England was the first country in the world to industrialise and modernise. This economic process was accompanied with the political struggle for liberty and democracy in the 17th and 18th centuries, which was particularly a struggle between the King and Parl­ia­ment. As we all know, Parl­iament won, and this laid the foundation of freedom and civil liberties in England, which was necessary to create the atmosphere which science requires to prosper.

This is why liberal democracy—that is, majority rule but qualified by firm protection of minorities and individual rights —is essential.

Similarly, in France, before the French Revolution of 1789, the Enlightenment thinkers—Rousseau, Voltaire, Did­e­rot, Hol­bach etc who attacked feudalism and religious dog­mat­ism paved the way for the Revolution of 1789, which led the way to scientific progress. On the other hand, in Italy, Spain and some other countries, the Inquisition stifled free thinking and thereby scientific gro­wth. All scientific ideas which were inconsistent with the Bible were regarded as crimes, eg the theory of Copernicus which stated the earth moved around the sun and not otherwise. As a result, these countries were left far behind England and France, and remained in the feudal dark ages for centuries.

The struggle to establish a scientific outlook was not an easy one. Scientific ideas were initially condemned because they were regarded as opposed to religious dogma. Voltaire and Rousseau had to run for their lives to other countries. The Church persecuted the greatest scientists with blind cruelty, burning them at the stake (eg Bruno), torturing them (eg Galileo), and forbidding or destroying their works. As recently as in 1925, the teaching of Darwin’s theory of evolution was forbidden in the US state of Tennessee, and a teacher, John Scopes, was tried in the famous ‘Monkey trial’ for teaching that theory. If we are to progress and rise as a world power, we have to spread the scientific outlook to every nook and corner in our country, and destroy superstitions.

Science questions everything and does not take anything for granted. Obviously, this approach is not permitted in an undemocratic society, eg feudal society (which is governed by religion) or fascist society (in which there is a dictator). Thus, Hitler, with his Nazi racial philosophy, caused an enormous setback to science in Germany by persecuting Jewish scientists and banning their works (eg Einstein).

Indeed, in India, after the Constitution was adopted in 1950, there was an atmosphere of liberal freedom in view of the fundamental rights guaranteed by the Constitution—the right to free speech (Art 19), liberty (Art 21), equality (Art 14-17), religious freedom (Art 25) etc. Article 51A(h) specifically enjoins citizens to develop a scientific temper and spirit of inquiry and reform. This helped the growth of science and technology in India, because it created an atmosphere of fre­edom where people, including scientists, could freely dis­c­uss and dissent. If we compare our country with our neighbours, there was no such freedoms in those countries and hence they lag far behind in economic growth.

As John Stuart Mill in his celebrated essay, On Liberty, says, all  progressive change and improvement of old ways of thinking and the consequent old behaviour patterns, habits, customs and traditions can come about only from free individual dissents and dissensions, innovations etc which are at first usually resisted by inert or conservative people (who are usually the vast majority), and by a free competition between old and new ideas. As pointed out by Mill, in any society ordinarily the majority shares old thoughts and traditions, and there is a strong tendency to insist on conformity and collective unity or solidarity, to repress dissent and innovations, and to tolerate only what the majority agree with. This inevitably works to prevent any progress and to thwart the creative impulses of the more original minds.

Extensive freedom to dissent and innovate, in all spheres of life, activity, culture and thought, including expressing ideas initially thought strange and often disliked by the conservative majority, are indispensable for progress. Intellectually advanced and creative individuals are often in the minority, and are regarded as non-conforming ecc­entrics and deviants, and there is often a tendency to suppress them. This is why liberal democracy, ie majority rule but qualified and limited by firm protection of minorities and individual rights and liberties—even as against the governing maj­ority—is essential for progress. The majority are often mediocre people who wish to continue in the old ways of thinking and pra­ctices. Hence, liberties and rights have to be guaranteed to the often powerless tiny minorities and lone individuals so that scientific progress can take place.

As the renowned Justice Oliver Wen­d­ell Holmes of the US Supreme Court said in his dissenting judgement in Abrams vs US (1919) observed: “The best test of truth is the power of the thought to get itself accepted in the competition of the market.” In India, the Supreme Court in Govt of AP and others vs P. Laxmi Devi, 2008 (4) scc 720, JT 2008 (2) 639  stated that the judiciary should be activist in upholding fre­edoms and civil liberties granted by Part 3 of the Constitution.

India needs democracy and scientific knowledge, and that means spreading scientific ideas amongst the vast masses, raising their cultural level and involving them actively in the task of nation-building. In my opinion, harsh and exemplary punishment should be given to per­petrators of the murders of Kalburgi and other crusaders against superstitions and irr­ational and unscientific ideas and practices.

(The author is a former Supreme Court judge and ex-chairman of the Press Council of India.)