A Regime In Denial

The 500 explosions were real, what's unreal is Dhaka refusing to recognise extremism 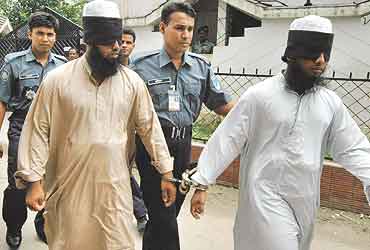 outlookindia.com
-0001-11-30T00:00:00+0553
When a bomb exploded in front of Dhaka's National Press Club, little did the city's press corps know of the grisly hours awaiting them on August 17. Soon the news began trickling in from across Bangladesh: a bomb here, a bomb there, yet another bomb at a third place. By noon, the figure had ballooned to 500, spread over 63 of Bangladesh's 64 districts, killing two and injuring 100.

It triggered an expected wave of panic. Dhaka wore a deserted appearance. As calm eventually descended, it became obvious that the bombs had been too crude to inflict devastation on a mind-numbing scale; that the 500 explosions were triggered more to communicate a warning to society than to kill randomly.

Those trying to decode the terrorists' message need not have bothered. The Jama'atul Mujahideen Bangladesh (JMB), banned earlier this year, claimed responsibility for the bombings. One of its leaflets read, "We are the soldiers of Allah. We have taken up arms for the implementation of Allah's law.... Those who want to give institutional shape to democracy are the enemies of Islam." There was also an outpouring against the Bush-Blair duo, together with a warning of bloody retaliation should the government arrest its cadres.

The government anyway arrested nearly 150 people. Four of them told interrogators that they were JMB members and had carried out the attack at the behest of their chief Moulana Abdur Rahman. Also arrested was Moulana Fariduddin Masud, a former senior official of the government-run Islamic Foundation, who was on his way to London. Masud told the court, "Grill Nizami and vital clues to the bombings will come out."

Hold your breath. Nizami is none other than Moulana Matiur Rahman Nizami, chief of the Jamaat-e-Islami and the industry minister in the federal government. Nizami had earlier convened a press conference to accuse Indian and Israeli intelligence outfits—RAW and Mossad respectively—for perpetrating the bombings. "They are the patrons of the serial bombings as they don't want good relations between Bangladesh and China. That's why the incident took place when Prime Minister Begum Khaleda Zia is in China," Nizami said. (India denied these charges.) 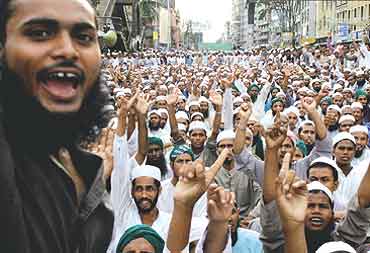 Also looming large over Bangladesh is the menacing shadow of Bangla Bhai, who has attained notoriety for his violent reprisals against banned Left groups in western Bangladesh. Bangla Bhai belongs to the JMB; his mentor is Moulana Abdur Rahman. His bloody acts against Left radicals, though, were carried out under the banner of the Jagrata Muslim Janata Bangladesh (JMJB). Both the JMB and the JMJB are overlapping outfits.

Bangla Bhai's possible role in the August 17 bombings pushed the Zia government into a corner. On January 26 this year, state minister for home affairs Lutfuzzaman Babor had rubbished the media about its report on the JMJB and Bangla Bhai. A month later, the government banned the JMB and the JMJB. The government's vacillation on militancy prompts Dhaka University's Prof Sirajul Islam to ask, "What will the government do now after denying the existence of such groups? After this well-planned attack, they can't deny their existence any longer."

The BNP leaders, however, are doing exactly that. Nadim Mostafa, a BNP lawmaker from western Natore district, told this correspondent, "I do not believe there is any extreme militant force in the country." He claimed the bombings were aimed at sabotaging the SAARC summit in November. Deputy minister for land Ruhul Quddus Talukder, also an MP from the same area, told this correspondent, "The (main opposition) Awami League must have done this using fake leaflets to destroy Bangladesh's image internationally. The JMJB and the JMB may have some hold in some areas, but they are not strong (enough to launch a countrywide attack). Those who are doing this are aiming to grab power by creating anarchy." Both these leaders and state minister for housing Alamgir Kabir had been earlier accused of bringing in Bangla Bhai to counter the outlawed left-wing Sarbahara Party in western Bangladesh.

Apart from the JMB and the JMJB, another outlawed group—the Ahle Hadith Andolon Bangladesh (AHAB) of Muhammad Asadulllah Al Galib—is under scrutiny for the bombings. Intelligence sources say these three Islamic militant groups are interlinked, and have connections with Islamic groups in Muslim countries in West Asia, and Pakistan. One school of opinion in intelligence circles believes AHAB is a mass platform of the JMB, and most AHAB workers are involved in JMB activities. Another school says JMB militants through Galib have utilised the facilities of some 700 mosques built across the country by the Revival of Islamic Heritage Society (RIHS). This Kuwait-based NGO, they say, has funded Galib with crores of takas over the last one decade.

Worried citizens feel August 17 is perhaps the last warning before the country spirals into a vortex of violence. Brig General (retd) Shahed Anam Khan told Outlook, "The organisation behind August 17 was extremely sophisticated and networked. It's clear that at least 500 people were used to place the bombs; their strategy was classic—send in men who don't know the core group which had planned and assembled the bombs. This is something which we never encountered in the past."

Khan, like so many others, thinks August 17 has brought into question the very existence of the nation. Its citizens can only hope that both the BMP and the Awami League sink their differences and come together to fight the monster called terrorism. Before it consumes them.

Protest Profile (In The Last 6 Months)